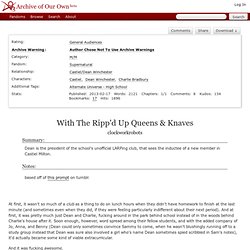 And at first, it was pretty much just Dean and Charlie, fucking around in the park behind school instead of in the woods behind Charlie's house after it. Everything Goes My Way de kkingofthebeach. We Got Spirit de endversed. Dean realises that his bet with Jo might have been a bad idea the second perky Anna Novak hands him his cheerleading uniform. 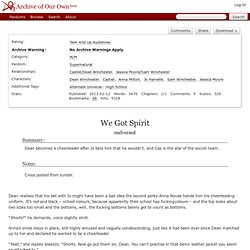 It’s red and black – school colours, because apparently their school has fuckingcolours – and the top looks about two sizes too small and the bottoms, well, the fucking bottoms barely get to count as bottoms. “Shorts?” He demands, voice slightly shrill. Like a Kite de letters_of_stars. Stuck Between Wings and You de Sofiwick. Gift type: FanficTitle: Stuck Between Wings and You.Recipient: SoraKHdemyxBeta: KodamasamaPairings: Dean/Castiel, possible pre-slash Sam/Gabriel.Disclaimer: These characters do not belong to me. 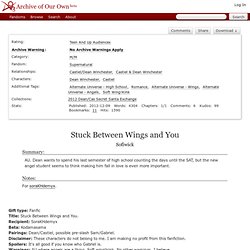 I am making no profit from this fanfiction.Spoilers: It's all good if you know who Gabriel is.Warnings: AU where angels are a thing. Soft wing! Kink. No other warnings, I believe. Have Love, Will Travel de Squeemonster. A Movie Marathon, Captain Morgan and Sweet Dreams - What Could Possibly Go Wrong? de Philargitta. We should get jerseys ('cause we make a good team) de Quiddative. “Dean, may I have a word with you for a minute?” 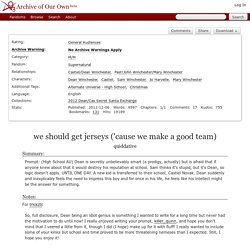 Asked Shurley. Dean turned around, ignoring the snickers and whispers from his classmates as they filed out of the room, no doubt wondering how badly he screwed up this time to incur a personal talking to from their normally soft-spoken, mousy English teacher. “Sure,” he said, walking up to Shurley’s desk. Shurley opened one of the drawers and took out a familiar looking title page of an essay—an essay that Shurley assigned a month ago and the due date of which was just last week. Dean blinked when he read it, “The Ascension of the Victorian Woman: The Round Table’s Dependence on Feminine Purity,” and realized with a start that it was his essay.

I Don't Want to Go Back Alone de lunalongbottom2448. Chapter Text Being the new kid was always terrible, and nobody knew this better than Dean Winchester. 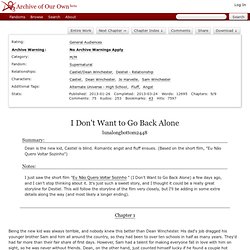 His dad's job dragged his younger brother Sam and him all around the country, so they had been to over ten schools in half as many years. They'd had far more than their fair share of first days. Waves de Wormstaches. Show Chapter. Catch Me If You Can Chapter 1: Dean Winchester, a supernatural fanfic. Nothing got Dean Winchester off quite like the sound of a bullet sinking into someone's chest. 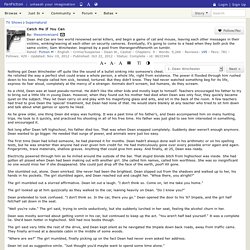 He relished the way a perfect shot could erase a whole person, a whole life, right from existence. The power it flooded through him rushed down to his toes. People called him sick, twisted, tortured. But they didn't know. Show Chapter. Destiel AU: The Vow Chapter 1, a supernatural fanfic. It had all happened so fast. 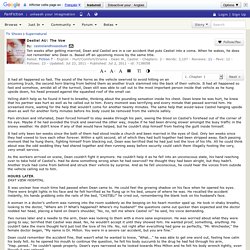 The sound of the horns as the vehicle swerved to avoid hitting on an oncoming truck, the second horn blaring from behind them as another truck slammed into the back of their vehicle. It had all happened so fast and somehow, amidst all of the turmoil, Dean still was able to call out to the most important person inside that vehicle as he hung upside down, his head pressed against the squashed roof of the small car. Yelling didn't help as he found it hard to breathe, thinking about the pounding sensation inside his chest. Dean knew he was hurt, he knew that his partner was hurt as well as he called out to him.

Every moment was terrifying and every minute that passed worried him. Pain stricken and infuriated, Dean forced himself to stay awake through his pain, seeing the blood on Castiel's forehead out of the corner of his eye. It had only been ten weeks since the both of them had stood inside a church and been married in the eyes of God. Dr. Dr. Dr. "Hello? " The Breath Of All Things Chapter 1, a supernatural fanfic. A/N- this was written for the Dean/Cas Big Bang 2013! 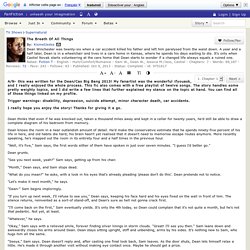 My fanartist was the wonderful ifyouask, and I really enjoyed the whole process. This fic also comes with a free playlist of twelve songs. The story handles some pretty weighty topics, and I did write a few lines that further explained my stance on the topic at hand. You can find all of those things linked on my profile.