A-Z Solutions, Inc. has been the leader in vapor intrusion mitigation for over 10 years. Our team of highly skilled project managers have successfully used Sub Slab Depressurization (SSD) technology to treat various contaminates with a 100% success rate.

Ohio Health Departments are trying to Spread the word on Radon. This January, more than 30 county health departments in Ohio will be launching a joint public health campaign. 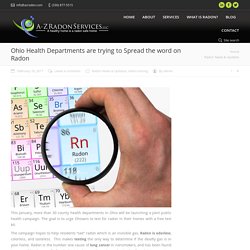 Radon may be linked to Blood cancers in Women – Radon Testing Ohio. Research suggests a strong link between exposure to high levels of radon in the home and women’s risk of blood cancers. 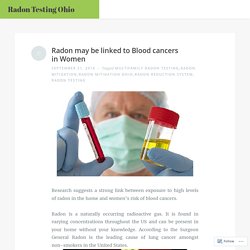 Radon is a naturally occurring radioactive gas. It is found in varying concentrations throughout the US and can be present in your home without your knowledge. According to the Surgeon General Radon is the leading cause of lung cancer amongst non-smokers in the United States. The study conducted by the American Cancer Society, collected information over 19 years on more than 140,000 Americans as part of a prevention study.

During that time, just over 3,000 cases of blood cancer were diagnosed. The findings indicate that women who lived in counties with the highest radon levels were 63 percent more likely to develop blood cancers than those in counties with the lowest radon levels. The study was published online recently in the journal Environmental Research. Like this: Like Loading... 5 Radon Myths. Creating Awareness for Radon. For decades, the Lung Association, Amercian Cancer Society and EPA have worked with nonprofits, industry and other government agencies to educate the public about radon, and encourage people to reduce radon risk. 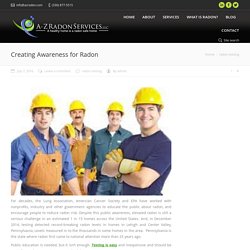 Despite this public awareness, elevated radon is still a serious challenge in an estimated 1 in 15 homes across the United States. And, in December 2014, testing detected record-breaking radon levels in homes in Lehigh and Center Valley, Pennsylvania, Levels measured in to the thousands in some homes in the area. Pennsylvania is the state where radon first came to national attention more than 25 years ago. Public education is needed, but it isn’t enough. Testing is easy and inexpensive and should be part of every homes maintenance schedule. The first step in the game plan came in 2011 when EPA and eight partner federal agencies launched the Federal Radon Action Plan. Is There Radon in My Child’s School? I was recently asked by a local school teacher what risk radon has for her students. 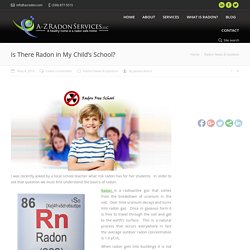 In order to ask that question we must first understand the basics of radon. Radon gas Radon is a radioactive gas that comes from the breakdown of uranium in the soil. Over time uranium decays and turns into radon gas. Once in gaseous form it is free to travel through the soil and get to the earth’s surface. When radon gets into buildings it is not able to escape or be ventilated, this is where it builds and can get o dangerously high levels. The health effects of radon exposure depend on two factors; time and radon concentration.

This combination of time and level of exposure can have dangerous health effects on a child. Why Free Radon Tests are Not Always Free. Another thing to consider, do you really want to trust a company whose only means of generating revenue is to seek out homeowners who will have elevated radon levels? 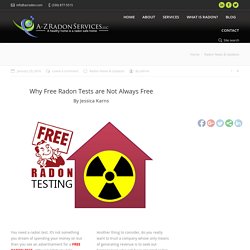 Of course, we want to believe that all professional radon companies are completely upfront and honest, but when their only means of making money is making sure they sell mitigation systems it can be hard to trust that your results are completely accurate. In other words, you get what you pay for. Hiring a licensed radon professional and paying for a radon test could actually end up saving you a substantial amount of money in the long run. In Ohio radon testing professionals must acquire a license to test for radon from the Ohio Department of Health.

Like a number of licensed professionals, licensees are required to maintain their license by completing yearly continuing education credits. Top 5 Radon myths. Radon is a radioactive gas and exposure to it causes 21,000 lung cancer deaths per year—only smoking causes more. 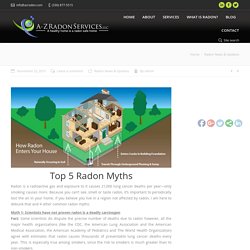 Because you can’t see, smell or taste radon, it’s important to periodically test the air in your home. If you believe you live in a region not affected by radon, I am here to debunk that and 4 other common radon myths: Myth 1: Scientists have not proven radon is a deadly carcinogenFact: Some scientists do dispute the precise number of deaths due to radon however, all the major health organizations (like the CDC, the American Lung Association and the American Medical Association, the American Academy of Pediatrics and The World Health Organization) agree with estimates that radon causes thousands of preventable lung cancer deaths every year. This is especially true among smokers, since the risk to smokers is much greater than to non-smokers. January is National Radon Action Month. 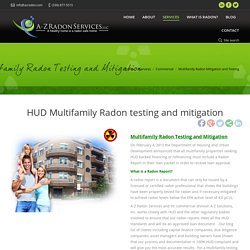 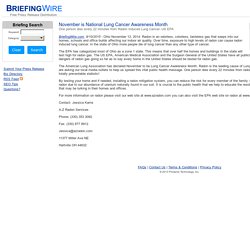 Over time, exposure to high levels of radon can cause radon induced lung cancer. In the state of Ohio more people die of lung cancer than any other type of cancer. The EPA has categorized most of Ohio as a zone 1 state. This means that over half the homes and buildings in the state will test high for radon gas. The US EPA, American Medical Association and the Surgeon General of the United States have all publicly made statements about the dangers of radon gas going so far as to say every home in the United States should be tested for radon gas. The American Lung Association has declared November to be Lung Cancer Awareness Month. By testing your home and if needed, installing a radon mitigation system, you can reduce the risk for every member of the family. Contact: Jessica Karns A-Z Radon Services Phone: (330) 353 3092.