Community Gardens of Tucson. Future.Life.Concepts. The_Word_made_Manifest_through_Sacred_Geometry.pdf. 14th Amendment. Main.html. Part I: Secret SocietiesThe Committee of 300, The Jesuits, 13 Illuminati Papal Bloodline Families, The Corporation of the UNITED STATES OF AMERICA, The Federal Reserve Bank, Operation Paperclip & MK-Ultra In order to gain an understanding of why the world finds itself in such upheaval, we must begin by going back in history to unearth the roots of this problem, and to clearly show that history has not been a random series of events, but rather a carefully planned and executed ‘design’ of land, wealth, and resource grabbing by a small number of wealthy and privileged individuals bent on world domination. 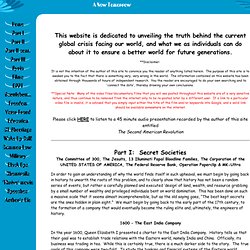 This has been done on such a massive scale that it seems almost incomprehensible, but as the old saying goes, “The best kept secrets are the ones hidden in plain sight.” We must begin by going back to the early part of the 17th century, to the formation of a company that would eventually become the ruling elite and, ultimately, the engineers of history. - George Washington and... Links: Spiritual Economics Now » Distinctions and Responses. This article is subject to editing, so please do not copy and send it out; rather, send your contacts to this blog for the latest edit. 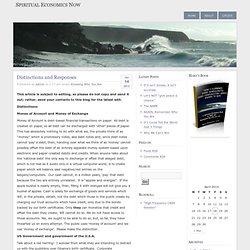 Distinctions: Money of Account and Money of Exchange Money of Account is debt-based financial transactions on paper. All debt is created on paper, so all debt can be discharged with ‘other’ pieces of paper. This has absolutely nothing to do with what we, the private think of as “money” which is promissory notes, aka debt notes and, since debt notes cannot ‘pay’ a debt, then, handing over what we think of as ‘money’ cannot possibly offset the debt of an entirely separate money system based upon electronic and paper-created debits and credits. US Government and government of the U.S.A. Talk about a red herring! “Health Care” and Medical Care When we look after our own health, we save our time, our money, our sanity, and our life. RCMP and R.C.M.P. The Missing 13th Amendment - The Lawful Path. David M. 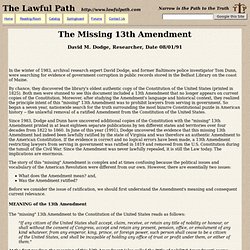 Dodge, Researcher, Date 08/01/91 In the winter of 1983, archival research expert David Dodge, and former Baltimore police investigator Tom Dunn, were searching for evidence of government corruption in public records stored in the Belfast Library on the coast of Maine. By chance, they discovered the library's oldest authentic copy of the Constitution of the United States (printed in 1825). Both men were stunned to see this document included a 13th Amendment that no longer appears on current copies of the Constitution. Moreover, after studying the Amendment's language and historical context, they realized the principle intent of this "missing" 13th Amendment was to prohibit lawyers from serving in government. 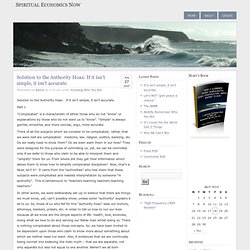 Part 1 “Complicated” is a characteristic of either those who do not “know” or explanations by those who do not want us to “know”. “Simple” is always gentler, smoother, and more concise; ergo, more accurate. Think of all the subjects which we consider to be complicated; rather, that we were told are complicated: medicine, law, religion, politics, banking, etc. Do we really need to know them? In other words, we were deliberately set-up to believe that there are things we must know, yet, can’t possibly know, unless some “authority” explains it all to us.