The Growing Demand for Tea in the US. Why the US Tea Industry Is Seeing Impressive Growth PART 1 OF 5 By Sharon Bailey | Jun 4, 2015 4:08 pm EST The World Tea Expo The World Tea Expo was held from May 6 to May 8 in Long Beach, California. 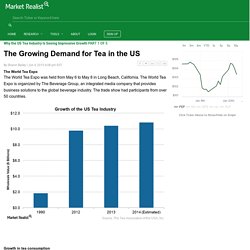 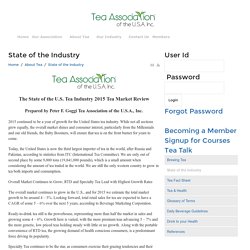 Tea Industry 2015 Tea Market Review Prepared by Peter F. Goggi Tea Association of the U.S.A., Inc. 2015 continued to be a year of growth for the United States tea industry. What Are the Key Categories in the US Tea Industry? Why the US Tea Industry Is Seeing Impressive Growth PART 2 OF 5 By Sharon Bailey | Jun 4, 2015 4:10 pm EST US tea industry Data from the Tea Association of the USA estimates that the wholesale value of the US tea industry grew by 4.1% to reach $10.8 billion in 2014. 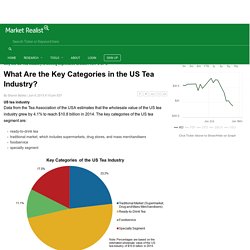 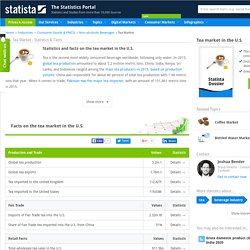 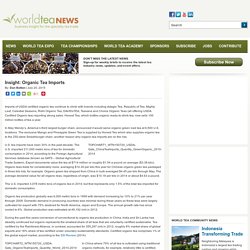 Honest Tea, which bottles organic ready-to-drink tea, now sells 100 million bottles of tea a year. In May Wendy’s, America’s third largest burger chain, announced it would serve organic green iced tea at 6,500 U.S. locations. The exclusive Mango and Pineapple Green Tea is supplied by Honest Tea which also supplies organic tea to the 250-store Smashburger chain, another reason why organic tea imports are on the rise. The World's Largest Exporters And Importers of Tea. The world’s second-most popular drink, after water, tea is a timeless, aromatic beverage enjoyed by people of all ages throughout the world. 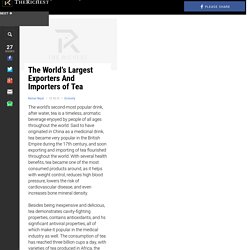 Said to have originated in China as a medicinal drink, tea became very popular in the British Empire during the 17th century, and soon exporting and importing of tea flourished throughout the world. With several health benefits, tea became one of the most consumed products around, as it helps with weight control, reduces high blood pressure, lowers the risk of cardiovascular disease, and even increases bone mineral density. Besides being inexpensive and delicious, tea demonstrates cavity-fighting properties, contains antioxidants, and hs significant antiviral properties, all of which make it popular in the medical industry as well. The consumption of tea has reached three billion cups a day, with varieties of tea produced in Africa, the Near East, South America, and in the Asian region. 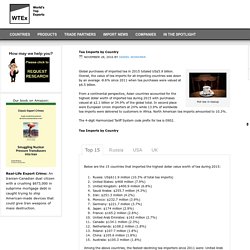 Overall, the value of tea imports for all importing countries was down by an average -8.6% since 2011 when tea purchases were valued at $6.5 billion.From a continental perspective, Asian countries accounted for the highest dollar worth of imported tea during 2015 with purchases valued at $2.1 billion or 34.9% of the global total. In second place were European Union importers at 24% while 13.9% of worldwide tea imports were delivered to customers in Africa. U.S. tea imports from selected countries of origin 2013. Tea Fact Sheet. Le thé (Rapport sur les tendances alimentaires américaines) Consumer Lifestyles in the US. Why buy this report? 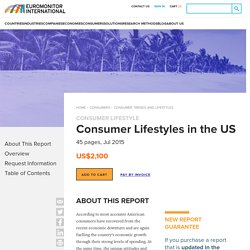 Gain competitive intelligence about market leaders. Track key industry trends, opportunities and threats. Inform your marketing, brand, strategy and market development, sales and supply functions. Tea in the US. New Report Guarantee If you purchase a report that is updated in the next 60 days, we will send you the new edition and data extract FREE! 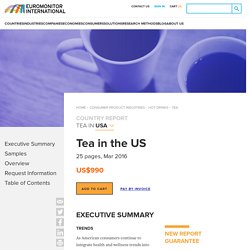 As American consumers continue to integrate health and wellness trends into their daily routines, the tea industry has received a boost in both retail volume and value terms. Tea is particularly appealing to the health-conscious consumer because of its health benefits, low calorie count and medicinal properties. In volume terms, herbal/traditional teas experienced the strongest growth of 13% in 2015 to approach sales of 2,800 tonnes.