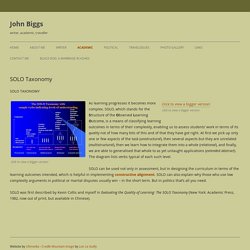 SOLO, which stands for the Structure of the Observed Learning Outcome, is a means of classifying learning outcomes in terms of their complexity, enabling us to assess students’ work in terms of its quality not of how many bits of this and of that they have got right. At first we pick up only one or few aspects of the task (unistructural), then several aspects but they are unrelated (multistructural), then we learn how to integrate them into a whole (relational), and finally, we are able to generalised that whole to as yet untaught applications (extended abstract).

The diagram lists verbs typical of each such level. SOLO can be used not only in assessment, but in designing the curriculum in terms of the learning outcomes intended, which is helpful in implementing constructive alignment. SOLO taxonomy explained using Lego. SOLO lesson outcomes and formative assessmnet.

On Twitter, I recently received sort of valid point about the ability of SOLO taxonomy to provide useful "feed forward". I sort of agree with this, a bit. And, only if you don't plan out the content that is to be learned. One of the inherently beautiful things about SOLO Taxonomy is the incorporation of content knowledge. Unlike the pillars of baroque villas, the columns that give SOLO its recognisable facade have structural integrity. The taxonomy is not a bolt accessory to learning, it structures it in a clear and purposeful way. However, the linear route learning takes appears to be considered axiomatic. Take these examples from the new year 8 Science module currently being planned. define an elementdefine a compounddefine a mixture Each one appears to be unistructural until each definition is dissected. The Secret SOLO'ist Part 1.

A few years back I undertook a whole load of reading and research to develop the quality of my teaching. 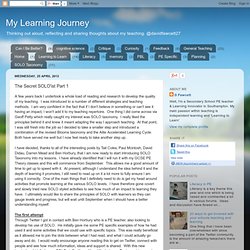 I was introduced to a number of different strategies and teaching methods. I am very confident in the fact that if I don't believe in something or can't see it having an impact, I won't add it to my teaching repertoire. One thing I did come across via Geoff Petty which really caught my interest was SOLO taxonomy. I really liked the principles behind it and knew it meant adapting the way I approach teaching. At that point, I was still fresh into the job so I decided to take a smaller step and introduced a combination of the revised Blooms taxonomy and the Alite Accelerated Learning Cycle. I have decided, thanks to all of the interesting posts by Tait Coles, Paul Mcintosh, David Didau, Darren Mead and Ben Horbury, that I am now ready to start introducing SOLO Taxonomy into my lessons. The session was loosely based around SOLO and used some slides that Ben Horbury had shared with my. Solo Taxonomy and MentorMob. A Match Made in Heaven?

The concept was first developed in 1982 (Biggs and Collis) and has since been defined as: ‘Structure of the Observed Learning Outcome, a means of classifying learning outcomes in terms of their complexity, enabling us to assess students’ work in terms of its quality not of how many bits of this and of that they got right.’ 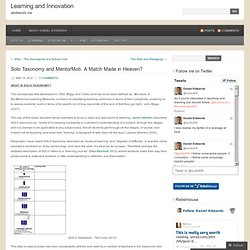 John Biggs (2007) The use of this linear structure allows teachers to focus a class and add layers to learning. James Atherton describes SOLO taxonomy as: ‘levels of increasing complexity in a student’s understanding of a subject, through five stages, and it is claimed to be applicable to any subject area. Not all students get through all five stages, of course, and indeed not all teaching (and even less “training” is designed to take them all the way)’ (James Atherton 2005). Personally I have heard SOLO taxonomy described as ‘levels of learning’ and ‘degrees of difficulty’.

(SOLO Tasksheet – Tait Coles 2012) So where does Mentormob.com figure in all of this? Like this: Hexagonal Learning. The mantra of all successful lesson observations these days is that students should be seen to be making progress. 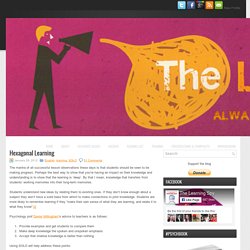 Perhaps the best way to show that you’re having an impact on their knowledge and understanding is to show that the learning is ‘deep’. By that I mean, knowledge that transfers from students’ working memories into their long-term memories. Students understand new ideas by relating them to existing ones. SOLO Stations. There seems to an awful lot of excellent posts written about SOLO Taxonomy at the moment, which is obviously absolutely fantastic …..I just thought I’d best write one to keep up with the very high standard of reflection and sharing! 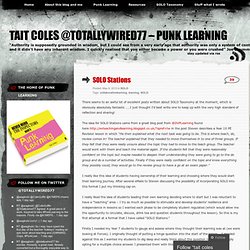 The idea for SOLO Stations came from a great blog post from @DVPLearning found here in the post Steven describes a Year 10 PE Revision lesson in which “He then explained what the next task was going to be. This is where teach, do, review comes in! The teacher explained that they needed to move themselves in to one of three groups. If they felt that they were really unsure about the topic they had to move to the teach group. The teacher would work with them and teach the material again.