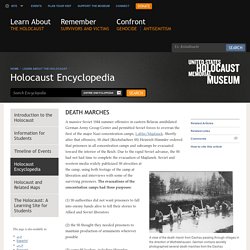 Shortly after that offensive, SS chief (Reichsfuehrer SS) Heinrich Himmler ordered that prisoners in all concentration camps and subcamps be evacuated toward the interior of the Reich. Due to the rapid Soviet advance, the SS had not had time to complete the evacuation of Majdanek. Soviet and western media widely publicized SS atrocities at the camp, using both footage of the camp at liberation and interviews with some of the surviving prisoners. The evacuations of the concentration camps had three purposes: (1) SS authorities did not want prisoners to fall into enemy hands alive to tell their stories to Allied and Soviet liberators. Microsoft Word 6260. Major death marches from Auschwitz, January 1945. Holocaust Survivor Testimonies: The Death Marches. And These are Their Names... Identifying the Death March Victims Buried in a Mass Grave in Poland. 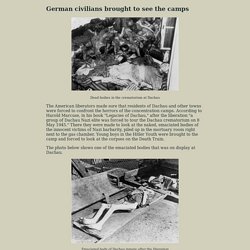 According to Harold Marcuse, in his book "Legacies of Dachau," after the liberation "a group of Dachau Nazi elite was forced to tour the Dachau crematorium on 8 May 1945. " There they were made to look at the naked, emaciated bodies of the innocent victims of Nazi barbarity, piled up in the mortuary room right next to the gas chamber. Deceiving the Public. “Common sense could not understand that it was possible to exterminate tens and hundreds of thousands of Jews,” —Yitzhak Zuckerman, a leader of the Jewish resistance in Warsaw Propaganda was as an important tool to win over the majority of the German public who had not supported Adolf Hitler. 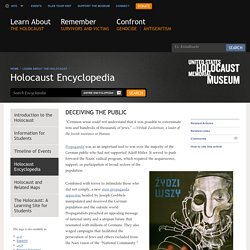 It served to push forward the Nazis' radical program, which required the acquiescence, support, or participation of broad sectors of the population. Combined with terror to intimidate those who did not comply, a new state propaganda apparatus headed by Joseph Goebbels manipulated and deceived the German population and the outside world. Propagandists preached an appealing message of national unity and a utopian future that resonated with millions of Germans. They also waged campaigns that facilitated the persecution of Jews and others excluded from the Nazi vision of the “National Community.” Germans knew of Holocaust horror about death camps. The mass of ordinary Germans did know about the evolving terror of Hitler's Holocaust, according to a new research study. 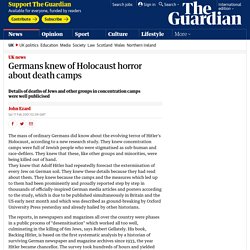 They knew concentration camps were full of Jewish people who were stigmatised as sub-human and race-defilers. They knew that these, like other groups and minorities, were being killed out of hand. They knew that Adolf Hitler had repeatedly forecast the extermination of every Jew on German soil. They knew these details because they had read about them.