Elie Wiesel: First Person Singular . Life In Sighet, Romania 1920-1939. Romania. The treaties that followed World War I more than doubled the territory and population of Romania. 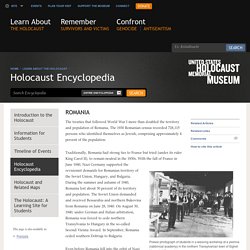 The 1930 Romanian census recorded 728,115 persons who identified themselves as Jewish, comprising approximately 4 percent of the population. Traditionally, Romania had strong ties to France but tried (under its ruler King Carol II), to remain neutral in the 1930s. Hungary before the German Occupation. HUNGARY AFTER WORLD WAR I Hungary had been on the losing side of World War I. 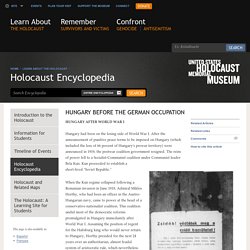 After the announcement of punitive peace terms to be imposed on Hungary (which included the loss of 66 percent of Hungary's prewar territory) were announced in 1919, the postwar coalition government resigned. The reins of power fell to a Socialist-Communist coalition under Communist leader Bela Kun. Hungary after the German Occupation. GERMAN OCCUPATION OF HUNGARY Hungarian units suffered tremendous losses during the German defeat at Stalingrad on the eastern front in 1942–1943. 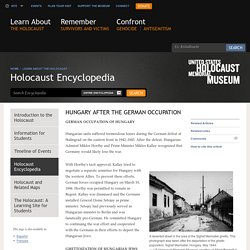 After the defeat, Hungarian Admiral Miklos Horthy and Prime Minister Miklos Kallay recognized that Germany would likely lose the war. With Horthy's tacit approval, Kallay tried to negotiate a separate armistice for Hungary with the western Allies. To prevent these efforts, German forces occupied Hungary on March 19, 1944. Deportations from Hungarian ghettos to Auschwitz. Classification System in Nazi Concentration Camps. VICTIMS OF PERSECUTION Among the first victims of persecution in Nazi Germany were political opponents—primarily Communists, Social Democrats, and trade unionists. 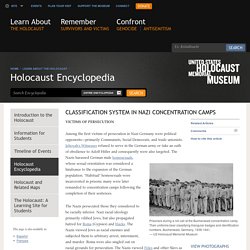 Jehovah's Witnesses refused to serve in the German army or take an oath of obedience to Adolf Hitler and consequently were also targeted. The Nazis harassed German male homosexuals, whose sexual orientation was considered a hindrance to the expansion of the German population. "Habitual" homosexuals were incarcerated in prisons; many were later remanded to concentration camps following the completion of their sentences. The Nazis persecuted those they considered to be racially inferior. Nazi racial ideology primarily vilified Jews, but also propagated hatred for Roma (Gypsies) and blacks. Winfrey & Wiesel - Auschwitz (Part 1) 8 Stages of Genocide. 10 stages of genocide. Case Study First Modern Genocide 20th Century 4th Ed Overheads Section 4.