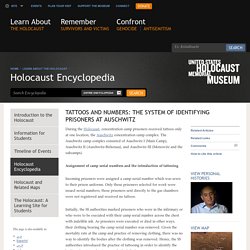 The Auschwitz camp complex consisted of Auschwitz I (Main Camp), Auschwitz II (Auschwitz-Birkenau), and Auschwitz III (Monowitz and the subcamps). Assignment of camp serial numbers and the introduction of tattooing. Sanitation in the Concentration Camps - Key Stage 3 - The Holocaust Explained. Sanitary facilities for prisoners at Auschwitz-Birkenau were extremely poor. 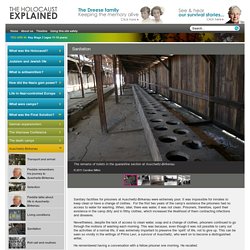 It was impossible for inmates to keep clean or have a change of clothes. For the first two years of the camp’s existence the prisoners had no access to water for washing. When, later, there was water, it was not clean. Prisoners, therefore, spent their existence in the camp dirty and in filthy clothes, which increased the likelihood of them contracting infections and diseases. 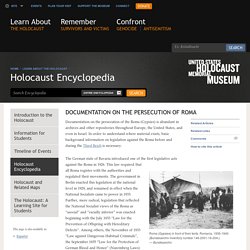 In order to understand where material exists, basic background information on legislation against the Roma before and during the Third Reich is necessary. The German state of Bavaria introduced one of the first legislative acts against the Roma in 1926. This law required that all Roma register with the authorities and regulated their movements. The government in Berlin enacted this legislation at the national level in 1929, and remained in effect when the National Socialists came to power in 1933. Mosaic of Victims: In Depth. Jews were one of four groups racially targeted for persecution in Nazi Germany and in German-controlled Europe. 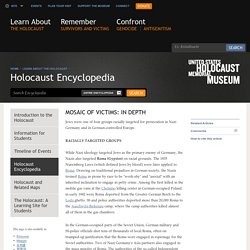 RACIALLY TARGETED GROUPS While Nazi ideology targeted Jews as the primary enemy of Germany, the Nazis also targeted Roma (Gypsies) on racial grounds. The 1935 Nuremberg Laws (which defined Jews by blood) were later applied to Roma. Drawing on traditional prejudices in German society, the Nazis termed Roma as prone by race to be "work-shy" and "asocial" with an inherited inclination to engage in petty crime. Among the first killed in the mobile gas vans at the Chelmno killing center in German-occupied Poland in early 1942 were Roma deported from the Greater German Reich to the Lodz ghetto.

SS and police authorities deported more than 20,000 Roma to the Auschwitz-Birkenau camp, where the camp authorities killed almost all of them in the gas chambers. The United States and the Holocaust. During World War II, rescue of Jews and other victim groups persecuted by Nazi Germany was not a priority for the United States government. 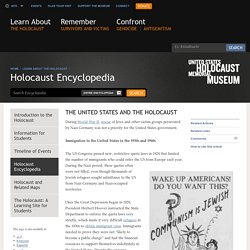 Immigration to the United States in the 1930s and 1940s The US Congress passed new, restrictive quota laws in 1924 that limited the number of immigrants who could enter the US from Europe each year. During the Nazi period, these quotas often were not filled, even though thousands of Jewish refugees sought admittance to the US from Nazi Germany and Nazi-occupied territories. Once the Great Depression began in 1929, President Herbert Hoover instructed the State Department to enforce the quota laws very strictly, which made it very difficult refugees in the 1930s to obtain immigrant visas.