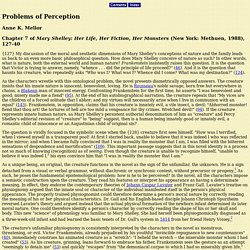 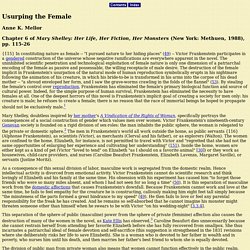 Mellor Chapter 6 of Mary Shelley: Her Life, Her Fiction, Her Monsters (New York: Methuen, 1988), pp. 115-26 {115} In constituting nature as female -- "I pursued nature to her hiding places" (49) -- Victor Frankenstein participates in a gendered construction of the universe whose negative ramifications are everywhere apparent in the novel.

The uninhibited scientific penetration and technological exploitation of female nature is only one dimension of a patriarchal encoding of the female as passive and possessable, the willing receptacle of male desire. A Cultural History of Frankenstein: Curiosity and Gender. Passion and curiosity: two things that women of the 19th century were feared to possess. 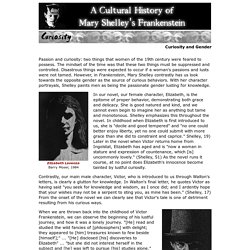 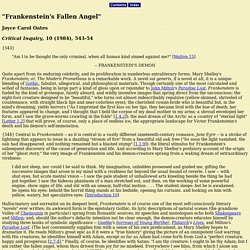 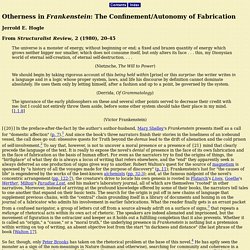 Hogle From Structuralist Review, 2 (1980), 20-45 The universe is a monster of energy, without beginning or end; a fixed and brazen quantity of energy which grows neither bigger nor smaller, which does not consume itself, but only alters its face . . . this, my Dionysian world of eternal self-creation, of eternal self-destruction. . . . 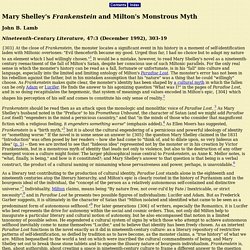 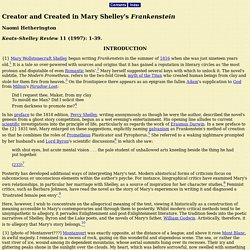 Monster of Theory: The “Quest” for Mythology and Archetypes in Frankenstein. Northrop Frye concedes in The Archetypes of Literature that his tables of archetypes are “not only elementary but grossly over-simplified” (1315), but these tables can still be of use in analyzing Shelley’s Frankenstein. 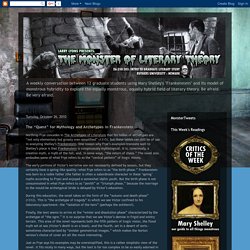 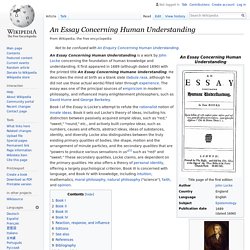 It first appeared in 1689 (although dated 1690) with the printed title An Essay Concerning Humane Understanding. He describes the mind at birth as a blank slate (tabula rasa, although he did not use those actual words) filled later through experience. The essay was one of the principal sources of empiricism in modern philosophy, and influenced many enlightenment philosophers, such as David Hume and George Berkeley. An Essay Concerning Human Understanding - Wikipedia. Romanticism. Mary Shelley's Frankenstein. A selective list of online literary criticism for Mary Shelley's Frankenstein, favoring signed articles by recognized scholars, articles published in reviewed sources, and web sites that adhere to the Modern Language Association Guidelines for Authors of Web Pages Main Page | 19th-Century Literature | 19th-Century Novel | About LiteraryHistory.com Anderson, Robert. 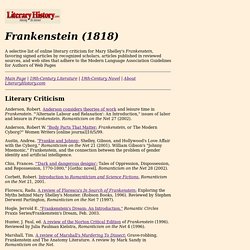 Anderson considers theories of work and leisure time in Frankenstein. Cantor, "The Nightmare of Romantic Idealism" The Nightmare of Romantic Idealism Chapter 3 of Creature and Creator: Myth-Making and English Romanticism (Cambridge and New York: Cambridge Univ. Press, 1984), 103-32 Paul Cantor Frankenstein has as much claim to mythic status as any story ever invented by a single author. The original novel continues to be read by a wide audience, and has of course spawned innumerable adaptations, imitations, and sequels.1 Through its cinematic incarnations, the Frankenstein story has ingrained itself on the popular imagination. Frankenstein.