Unlocking the Secrets of Dictation Software. Dragon is a software that allows you to dictate your translation while it does the heavy lifting, i.e., typing. 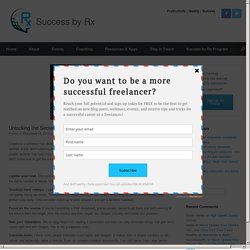 In my opinion, if you aren’t utilizing dictation software of some kind, you’re really missing out. I’ve heard from a few people recently that said they had tried it and not liked it, but the more I probed, the more I realized that they just didn’t know how to get the most out of it to actually see productivity results. First, let’s talk about the benefits: Lighten your load. First and foremost, it just makes translating easier. Goodbye hand cramps. Focus on the source. Hear your translation. Translate faster.

Use commands to automate your repeated tasks. Translate consistently and translate better. Multitask. I know you’re sold on dictation software now, but hold off on pressing “buy” before you read the pitfalls: Tomato: tomayto or tomahto? Proofread differently. Heavy program. No distractions. 10 Steps to Determine CAT Tool Compatibility with the Dragon. Nc 033524. Nora Díaz on Translation, Teaching, and Other Stuff: Dragon Professional Individual 14 and Studio: What will you say? While not every project is dictation-friendly, speech recognition can undoubtedly be a valuable tool for a translator. 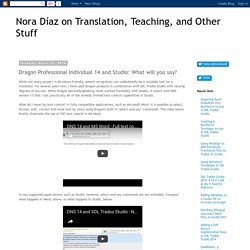 For several years now, I have used Dragon products in combination with SDL Trados Studio with varying degrees of success. While Dragon NaturallySpeaking never worked flawlessly with Studio, it wasn't until DNS version 13 that I lost practically all of the already limited text control capabilities in Studio. What do I mean by text control? In fully compatible applications, such as Microsoft Word, it is possible to select, format, edit, correct and move text by voice using Dragon's built-in "select-and-say" commands. The video below briefly illustrates the use of full text control in MS Word. In non-supported applications, such as Studio, however, select-and-say commands are not available. There are four methods that can be used to create commands: Translator forums - Speech recognition. Dragon Naturally Speaking (Speech recognition ) I've been using DNS for five years or so to great effect with Wordfast and for the last couple of years with Studio. 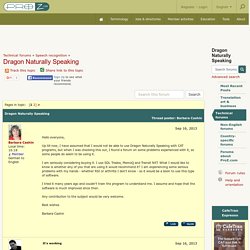 No problems at all with Wordfast, but sometimes Studio types annoying continental speechmarks if you pause to think (breathe!) Adding Speech to Text to Your Workflow. Michael J.W. 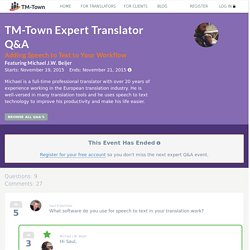 Beijer One downside of using speech recognition (SR) is that it can sometimes be harder to move words or phrases around or correct things by voice than with your keyboard or mouse. Having said that, this usually isn't such a problem as I like to combine speech recognition with keyboard/mouse use, rather than just try to do everything by voice alone, or keyboard/mouse alone. If you ask me, this is where the real benefits of SR start to appear: once you learn how to juggle the various input methods smoothly and enter flow.

For example, I am writing this reply using a combination of Dragon and my keyboard and mouse. Another potential downside involves lack of support for a particular program on your computer. Professional-Quality Translation at Light Speed: Why Voice Recognition May Well be the Most Disruptive Translation Technology You’ve Never Heard of. - Kevin Hendzel. ClaireCoxTranslations. I’ve been asked about my experiences of Dragon Naturally Speaking speech recognition software so much recently that it seemed a logical topic for my latest blog post. 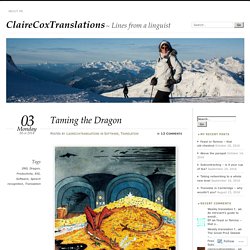 Translating against the clock with Dragon Naturally Speaking. After a discussion on voice recognition, which began in the comments for a totally unrelated post about a scatologically bad Linguistic Sausage Producer (LSP), I attempted a timed test of translation with voice transcription in my usual working environment as a demonstration of the productivity gains to be achieved. 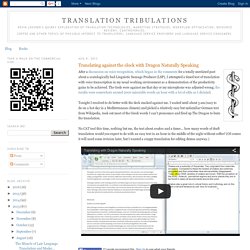 The Gods were against me that day or my microphone was adjusted wrong; the results were somewhere around 2000 miserable words an hour with a lot of edits as I dictated. Tonight I resolved to do better with the deck stacked against me. I waited until about 3 am (easy to do on a hot day in a Mediterranean climate) and picked a relatively easy but unfamiliar German text from Wikipedia, took out most of the Greek words I can't pronounce and fired up The Dragon to burn the translation. What version of Dragon? Home, Premium, Professional? (Speech recognition ) As of version 13, headset mics are no longer necessary (I hate them and have never used one), especially if you select the ‘Far Field’ option when setting up a new profile. 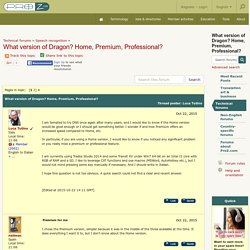 However, not all languages have access to the Far Field option yet, so you may not be able to use it (e.g., it is available for US English, but not for UK English). It is also not available in older versions of Dragon. I think they added it in v 13, so only 13 and 14 have it. Far field is optimised for a mic that is located farther away, e.g. a desktop mic. I am getting extremely good results (around 98%) with mine, together with Dragon Professional Individual 14, which is the latest version. The place to be for anything voice recognition-related is the KnowBrainer forum: I would also strongly recommend you do not buy directly from Nuance, but from as their support and service is much better, and more personalised. Michael. Nora Díaz on Translation, Teaching, and Other Stuff. Introduction to Voice Programming, Part One: DNS + Natlink.