The history of yeast... The use of yeast is not recent! 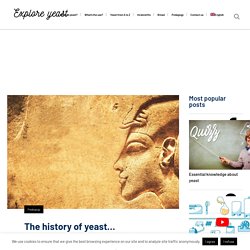 Without knowing its role or its existence, men have always used yeast. Its history goes back 5,000 years… … with the Egyptians who used yeast to make their bread, believing it to be a miracle. Humans have always used yeast, well before writing was invented. Egyptians used it to make bread some five thousand years ago. Before that they had been content with preparations made with cereals, gruel or flat breads as basic components of their daily diet. Bread was born the day that man realised that, with naturally fermented dough, bread could rise and its flavour and texture improved. In the first century AD, it is said that the first bread was made in Gaul and Iberia using beer foam, i.e. the head formed on the top of the beverage during its fermentation. Thanks Pasteur ! The history of yeast took a decisive turn in 1857 when Louis Pasteur discovered the fermentation process.

Explore yeast. Yeast is a microscopic, unicellular mushroom of ovoid or spherical shape. 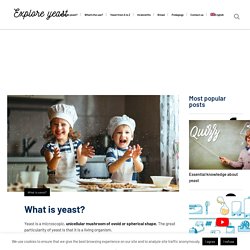 The great particularity of yeast is that it is a living organism. Just like those of humans, yeast cells are alive and natural. They need air to multiply, but the absence of air is not without consequence on its development. A living organism Although it looks inert, this block of yeast consists of a multitude of living organisms, scientifically called “micro-organisms“. There are several yeast species. Discovering the products of fermentation - Yeast. Use of yeast: major developments. People instinctively link yeast to bread and baking tradition. 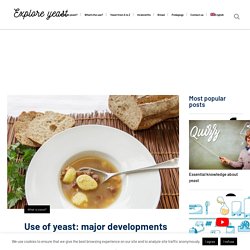 But tradition does not mean that techniques do not change! Whether in traditional or innovative fields of application, yeast is constantly being updated. Bread-making Evidently, knowledge and tools change, but so does society: bread consumption has become more international. For example, the Indian chapati or Italian ciabatta are now found everywhere and eaten worldwide. With the development of sourdough bread, attention is also turned on finding the best yeasts compatible with the acidic conditions of leavened recipes. Wine-making As the different players in the wine trade have various requirements for the quality of their finished products, there is even more ongoing research on the role of yeasts in wine-making than in bread-making.

Nutrition The biochemical composition of yeast reveals a product containing several elements which, when ingested by a living being, contribute to the smooth operation of its organism. Biofuels. The different forms of yeast. The benefits of yeast. Containing minerals, vitamins and amino acids, yeast offers many benefits. 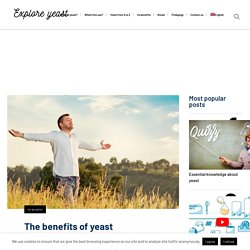 These indispensable elements for a healthy organism give yeast a crucial role in our diet and balance. For example, yeast and its derivatives are used in food supplements to complement our diet, ensure our well-being and help to improve our health. Yeast is also used in other sectors such as animal foods or cosmetics. Nutritional yeast : which benefits for our health ? The answer with John Westerdahl, nutritionnist. 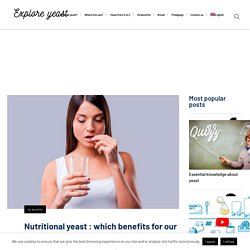 Why do you like yeast ? I love nutritional yeast because it adds great flavour as well as nutrition to foods. I have been using nutritional yeast in my diet regularly for the past 15 years. I love its nutty and “cheese-like” flavour. As a nutritionist, and as a vegan vegetarian myself, there are great culinary applications to using nutritional yeast in many recipes. What are the essential components of yeast ? How do the vitamins contained in yeast boost our health ? Is yeast an adequate supplement to a vegan diet ? Yeast and beer.

In the absence of air, yeast cells transform sugars into carbon dioxide and alcohol. 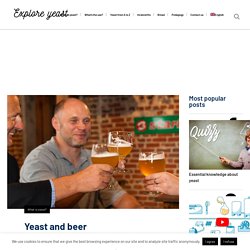 The same yeast is not used to ferment beer or whisky, or to make bread. Researchers have selected specific strains to make beer, wine, spirits and industrial ethanol (including ethanol-based fuel). The different strains of yeast for alcohol thus have their specific features to adapt to certain substrates (fruit, grapes, grain, beet, malt), enhance particular flavours in the finished product, adapt to certain temperatures, resist high or low temperatures, etc. The first beers appeared “by miracle” in Ancient Times. Discover the indispensable role of brewer’s yeast in the production of this beverage. According to historians, the first beers were accidentally brewed in Mesopotamia and Egypt and their fermentation was spontaneous. Yeast and wine. In the absence of air, yeast cells transform sugars into carbon dioxide and alcohol. 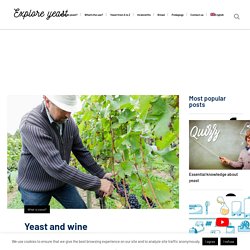 The same yeast is not used to ferment beer or whisky, or to make bread. Researchers have selected specific strains to make beer, wine, spirits and industrial ethanol (including ethanol-based fuel). The different strains of yeast for alcohol thus have their specific features to adapt to certain substrates (fruit, grapes, grain, beet, malt), enhance particular flavours in the finished product, adapt to certain temperatures, resist high or low temperatures, etc.

What role does yeast play in wine-making? Wine-making uses different strains of yeast that give wines their unique and sought-after taste. Yeasts reveal distinctive flavours (for instance the banana flavour so highly sought after in Beaujolais wine) and also enhance the flavours of certain grape varieties (Chardonnay, Sauvignon, etc.).