Roman Numbers (Roman Numerals) The Roman Numeral, as far as we know, was the only written numbering system used in Ancient Rome and Europe until about 900 AD, when the Arabic Numbering System, which was originated by the Hindu's, came into use. 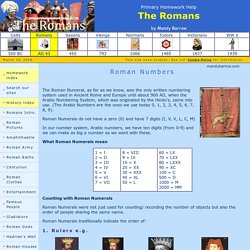 (The Arabic Numbers are the ones we use today 0, 1, 2, 3, 4, 5, 6, 7, 8, 9). Roman Numerals do not have a zero (0) and have 7 digits (I, V, X, L, C, M) In our number system, Arabic numbers, we have ten digits (from 0-9) and we can make as big a number as we want with these. What Roman Numerals mean Counting with Roman Numerals Roman Numerals were not just used for counting/ recording the number of objects but also the order of people sharing the same name.

Roman Numerals traditionally indicate the order of: XV means 10+5 =15 thus, XV=15 The current (265th) pope is Pope Benedict XVI, who was elected April 19, 2005. Other uses Roman numbers on a clock face What is odd about the Roman numbers used on a clock or watch? If you look at four, it is IIII instead of IV. Roman Numerals: Conversion, Meaning & Origins. The engraved marker for Entrance LII — 52 — is still visible at the Coliseum in Rome.Credit: WarpFlyght/Creative Commons Roman numerals originated, as the name might suggest, in ancient Rome. 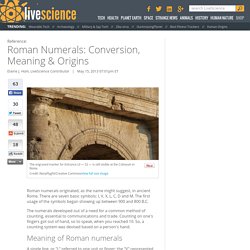 There are seven basic symbols: I, V, X, L, C, D and M. The first usage of the symbols began showing up between 900 and 800 B.C. The numerals developed out of a need for a common method of counting, essential to communications and trade. Counting on one's fingers got out of hand, so to speak, when you reached 10. Meaning of Roman numerals A single line, or "I," referred to one unit or finger; the "V" represented five fingers, specifically, the V-shape made by the thumb and forefinger. Larger Roman numerals developed from other symbols. M = 1,000 — Originally, the Greek letter phi — Φ — represented this value. D = 500 — The symbol for this number was originally IƆ — half of CIƆ. C = 100 — The original symbol was probably theta — Θ — and later became a C. Roman numerals. "Latin numerals" redirects here. 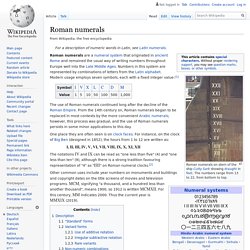 For counting in Latin, see Latin § Numbers. Entrance to section LII (52) of the Colosseum, with numerals still visible The numeric system represented by Roman numerals originated in ancient Rome and remained the usual way of writing numbers throughout Europe well into the late Middle Ages. Numbers in this system are represented by combinations of letters from the Latin alphabet. Roman Numerals Chart - Table of Equivalent Numbers. Roman numerals chart shows how letters are used in place of numbers. 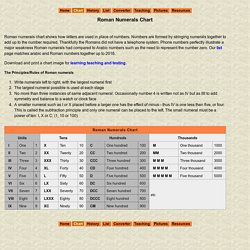 Numbers are formed by stringing numerals together to add up to the number required. Thankfully the Romans did not have a telephone system. Phone numbers perfectly illustrate a major weakness Roman numerals had compared to Arabic numbers such as the need to represent the number zero. Our list page matches arabic and Roman numbers together up to 2016. Download and print a chart image for learning teaching and testing. The Principles/Rules of Roman numerals Write numerals left to right, with the largest numeral firstThe largest numeral possible is used at each stageNo more than three instances of same adjacent numeral. Kids Math: Roman Numerals. Skills needed: Multiplication Addition Subtraction Roman numerals were used by the Ancient Romans as their numbering system. 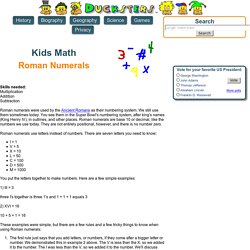