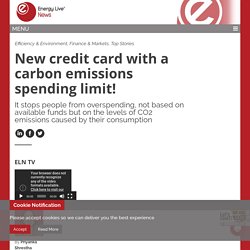 Swedish fintech company Doconomy’s ‘DO Black’ credit card, developed in partnership with Mastercard, is linked to an app that enables consumers to track and measure their carbon footprint from each purchase and allows them to put limits on the climate impact of their spending. It is the first credit card ever to stop people from overspending, not based on available funds but on the levels of CO2 emissions caused by their consumption. Those who sign up to DO will receive access to a savings account that helps them understand their carbon footprint, UN-certified climate compensation projects and investment funds that have a positive impact on people and the planet. “Many companies are already taking steps to lower their emissions, and to create a more sustainable and resilient future.

DECODE. Why are we doing this? 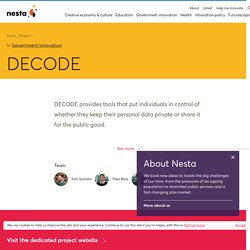 DECODE is a response to the loss of control people have over their personal data on the internet. As the internet and the number of connected devices has grown, so too has the amount of personal data people accumulate on a daily basis. Many internet services are free to use, but require people to share their data as a condition of use. This data is increasingly accumulated by a small number of big companies, who use and monetise this data, often without the awareness of the people who created it.

This is a problem. What are we doing? DECODE will develop and test new tools to give people control of their personal data. Government innovation.

Blockchain Technology is Shaping the Art World with Non-Fungible Tokens. [TL; DR] One of the promising field of application for NFTs is the Art industry: new usages, inspiration, transparency for all parties. 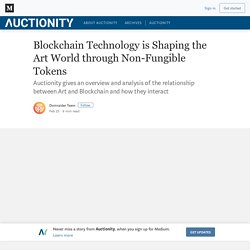 Let’s dive into this Art + Blockchain digest with some of our predictions for the future. The world of non-fungible tokens is currently teeming with new projects that are going to define the future evolutions and uses of blockchain technology. When we think of NFTs, the most famous ambassadors that come to mind are probably CryptoKitties or the card game Gods Unchained. Probably because they were among the very first demonstrations of NFT. However, that would be giving a very narrow vision of the current state of the NFT industry. NFTs: moving beyond gaming Sure, most NFT projects are currently games, there are about 35 of them (the main ones), with more or less numerous communities. Blockchain Technology is Shaping the Art World with Non-Fungible Tokens. Blockchain Technology is Shaping the Art World with Non-Fungible Tokens. UK ‘breaking open’ civil service recruitment, says chief exec. John Manzoni, chief executive of the UK Civil Service, Cabinet Office, UK. 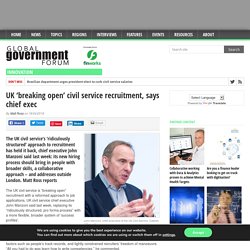 Speaking at an event hosted by think tank Reform, Manzoni noted that the previous recruitment process required applicants to demonstrate that they possessed a specific set of ‘competencies’ – but the system took little account of key factors such as people’s track records, and tightly constrained recruiters’ freedom of manoeuvre. 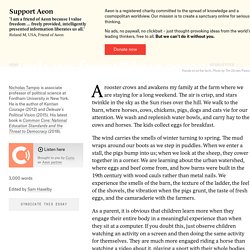 The air is crisp, and stars twinkle in the sky as the Sun rises over the hill. We walk to the barn, where horses, cows, chickens, pigs, dogs and cats vie for our attention. We wash and replenish water bowls, and carry hay to the cows and horses. The kids collect eggs for breakfast. The wind carries the smells of winter turning to spring. As a parent, it is obvious that children learn more when they engage their entire body in a meaningful experience than when they sit at a computer. Today, however, many powerful people are pushing for children to spend more time in front of computer screens, not less.

Many adults appreciate the power of computers and the internet, and think that children should have access to them as soon as possible. Updates on everything new at Aeon. According to Merleau-Ponty, European philosophy has long prioritised ‘seeing’ over ‘doing’ as a path to understanding.