Coping With Stress as a Parent of a Child With ASD. Autism Spectrum disorder or ASD is a reality that many families have to go through. 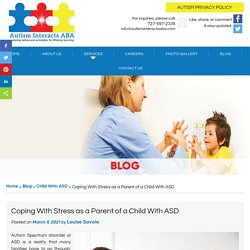 And while most of these families demonstrate the best in human beings – being able to take care of others without anything in return – even experts of ABA Therapy in New Port Richey, Florida, believe that this can be stressful, especially for the parents. Explaining Autism to Siblings. Society has become more adapted to deal with Autism Spectrum Disorder compared to a few hundred years ago. 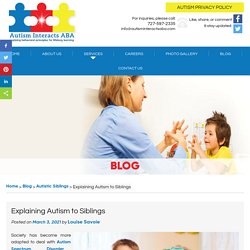 Back then, people misdiagnose ASD as one of many other conditions. In the most severe cases of ignorance, sometimes people call it the work of the devil. Today, the fields of psychology and medicine have had the time to study ASD. Research has found ways to increase the quality of life for patients and their families. Right now, patients with ASD have plenty of people to turn to – a psychiatrist, psychologist, and behavior analyst, among many others. What Puts You at Risk of Developmental Disabilities?

Developmental disabilities can begin at anytime during a child’s developmental period and can last throughout a person’s lifetime. 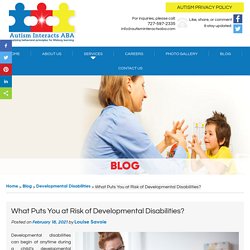 As a provider of behavior analysis in Tampa Bay, we have addressed cases with various causes. Some of the common causes of developmental disabilities in children include: Maternal infections during pregnancy such as cytomegalovirus (CMV) infectionFetal alcohol syndromeGenetic and chromosomal conditions such as Down syndrome and fragile X syndromeLow birthweight, premature birth, multiple births, and infections afterbirthUntreated newborn jaundice. Managing Over-Stimulation and Stress.

Children with autism can often become overwhelmed or overstimulated in situations beyond their control. 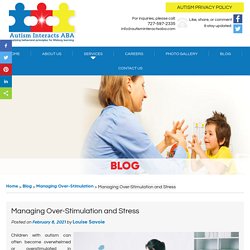 It is important for caregivers, teachers, and therapists to be able to have calming strategies to help these children even if they may not know what caused their discomfort. As a behavior analyst, we often provide advice regarding overstimulation and stress management. Here are some of the key points analysts always keep in mind especially during behavior therapy: Remember the rule of one Have only one person talk to the child and ask them to do only one thing. Having too many people talking all at once can escalate it. How Positive Reinforcement Works in Autism. Positive reinforcement involves the addition of a reinforcing stimulus following a behavior that makes it more likely that such behavior will occur again. 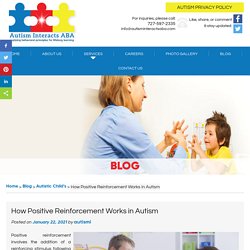 It is applied to strengthen a persons’ future behavior that is desired. It is the most effective behavior management strategy in dealing with children who have challenging behaviors. As per our behavior analysis in Tampa Baybehavior analys, it can be used to help children with autism learn new behaviors, effective life skills, and alternatives to repetitive behaviors. If your child has autism, it is best to visit us and undergo our behavior analysis in Florida. The principle of positive reinforcement is based on human nature that makes people act in certain ways to obtain desirable consequences.

If your child has autism, don’t worry. Raising a Child with Asperger’s Syndrome. Asperger’s Syndrome is a developmental disorder characterized by a difficulty in relating to others socially and having behavior and thinking pattern that is rigid and repetitive. 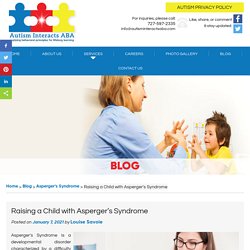 Generally, children with this disorder can speak with other people and perform fairly well in school. The difficulty comes in understanding social situations and subtle forms of communication like humor, sarcasm, and body language. A behavior analyst may be necessary for the diagnosis of Asperger’s Syndrome. Behavior therapy is helpful for children with Asperger’s. But as parents, we should know how to deal with them first and foremost. Early Intervention for Kids with Autism: What Does It Include? Autism Spectrum Disorder (ASD) doesn’t need to hinder kids from achieving success in their professional and personal adult life. 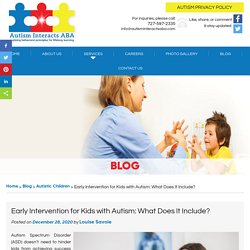 And as parents, helping them manage this condition starts by taking advantage of suitable programs and ABA Therapy in New Port Richey, Florida. To get started, find an early intervention program that includes the following – these are the core factors that can help kids cope. Family and Social Skills Training. This inclusion draws insights from an initial behavior analysis in Florida, especially on the child’s social readiness. Based on their current skills, they’ll be given training on expected group behavior. Games That Can Help Hone an Autistic Child’s Social Skills.

Play is often a kid’s idea of work. 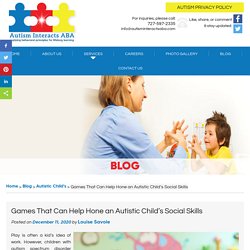 However, children with autism spectrum disorder (ASD) might find it challenging to play with their peers as they might have difficulties following expected group behavior. Yes, it’s best to take advantage of ABA Therapy in New Port Richey, Florida to assess your kids’ social readiness. Playing the following games with them at home might also help. Problem-solving Role Play. Proper Parent-Child Interaction.

Dealing with an autistic child can be challenging to parents, especially when they do not have any idea how to handle them properly. 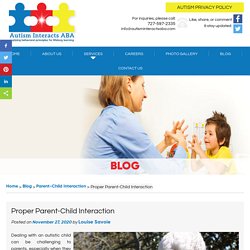 That is why they need to seek advice from professionals so they can handle their kids with care. ABA Therapy in New Port Richey, Florida in is here to help you! Here are some essential tips for dealing with them: Using positive reinforcementPositive reinforcements encourage a child to perform better, as time passes by, because of the reward they get. Importance of Playtime for Autistic Children. What to Do When Your Child Starts Having Tantrums. Tantrums are very common in children aged 1-3 years old. 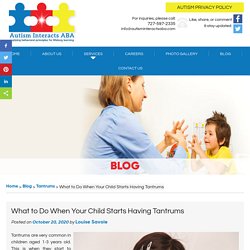 Here are some common myths about ASD: Vaccines cause autism. Take this from a behavior analyst, there is no single cause of ASD. Common Disabilities Misdiagnosed as ASD. Given how a lot of adults are unfamiliar with the signs and symptoms of autism in adults, Autism Spectrum Disorders (ASD) are commonly misdiagnosed as various other conditions. As a behavior analyst, we have encountered patients who have initially been misdiagnosed. Early Signs of Autism Spectrum Disorder. Many children with autism spectrum disorder (ASD) show differences in social and language skills at infancy.

These can be less obvious differences such as body gestures and social languages that can easily go unnoticed. As a provider of behavior analysis in Florida we give importance to tracking milestones for your child’s age to see if they are going through development typical for their age. Here are some common signs for children 24 months and below according to healthychildren.org: 12 months A child would typically turn his head when he hears his name. A child with ASD might not turn to look even after being called several times. 18 months A child with delayed speech skills may point, gesture, or use facial expressions to make up for the lack of talking.

However, keep in mind that children with ASD do not have exactly the same symptoms. Does your child have ASD? We provide various services such as behavior therapy, direct ABA service, parent training, and verbal behavior. Common Developmental Disabilities in Children. Developmental disabilities are impairments in physical, learning, language, or behavioral areas in children.

These begin during the developmental period and may impact day-to-day functioning, usually throughout a person’s lifetime. Positive Reinforcement for Behavior Improvement. Positive reinforcement involves the addition of a reinforcing stimulus following a behavior that makes it more likely that the behavior will occur again in the future (Source: verywellmind.com). Thus, when a favorable outcome occurs after an action, that particular behavior or response becomes strengthened. What to Expect in Applied Behavior Analysis. Applied Behavior Analysis (ABA) is a type of therapy that focuses on improving specific behaviors such as social skills, adaptive learning skills, fine motor skills, communication, and the like.