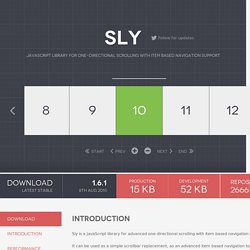 It can be used as a simple scrollbar replacement, as an advanced item based navigation tool, or as a great navigation and animation interface for parallax websites. This is achieved by a powerful & developer friendly API that provides a bunch of very useful methods giving you control over everything. Dependencies jQuery 1.7+ And that's it. Compatibility Sly works in every desktop browser, and due to some divine intervention, even in IE6+, but that is a complete accident. Mobile Sly does touch events, and I'm generally trying to make it work everywhere, but the fact is that mobile is not tested. 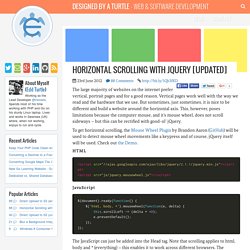 Vertical pages work well with the way we read and the hardware that we use. But sometimes, just sometimes, it is nice to be different and build a website around the horizontal axis. This, however, poses limitations because the computer mouse, and it’s mouse wheel, does not scroll sideways – but this can be rectified with good-ol’ jQuery.

To get horizontal scrolling, the Mouse Wheel Plugin by Brandon Aaron (GitHub) will be used to detect mouse wheel movements like a keypress and of course, jQuery itself will be used. Check out the Demo. JavaScript $(document).ready(function() { $('html, body, *').mousewheel(function(e, delta) { this.scrollLeft -= (delta * 40); e.preventDefault(); });}); The JavaScript can just be added into the Head tag. Demo After plenty of feedback, here’s a quick guide to getting it to work with WordPress. 10 jQuery Horizontal Scroll Demos & Plugins. In today’s post we bring to you 10 jQuery Horizontal Scroll Demos & Plugins useful for those who see things horizontally.

I guess we have to accept some people scroll both ways! :) Updated: March 2016 Updated all plugins and demos with the latest versions and added some new ones. Also removed plugins which aren’t in development anymore. ScrollMagic helps you to easily react to the user’s current scroll position. See the demo jInvertScroll is a lightweight plugin for jQuery that allows you to move in the horizontal with a parallax effect while scrolling down. See the demo 3. Cubiq/iscroll. iScroll 5, smooth scrolling for the web. Is there a way to invert vertical and horizontal scrolling · Issue #200 · alvarotrigo/fullPage.js. How To Make a Horizontal Website Tutorial. Home » code » jquery plugins » horizontal website View Demo 1 (simple as it gets) View Demo 2 (with a little style) I have some bad news folks - your going to see a lot more horizontal websites floating around the web now. 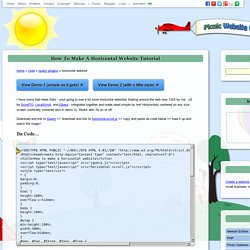 CSS by me - JS by ScrollTO, LocalScroll, and jQuery - integrated together and made dead simple by me! Horizontally centered on any size screen (vertically centered also in demo 2). Works with JS on or off. Download and link to jQuery >> download and link to horizontal-scroll.js >> copy and paste da code below >> load it up and watch the magic! Da Code... QUESTION: If you have more or less pages - how do I figure the math? ANSWER: Simple do this... in its current state there are 5 pages. Vertical and Horizontal Scrolling with fullPage.js. These days more and more sites are designed based on the single-page approach (known as single-page or one-page sites). 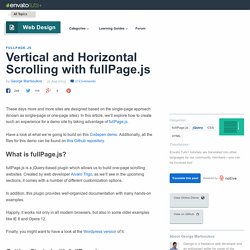 In this article, we’ll explore how to create such an experience for a demo site by taking advantage of fullPage.js. Have a look at what we’re going to build on this Codepen demo. Additionally, all the files for this demo can be found on this Github repository. FullPage.js jQuery Plugin for fullscreen scrolling websites. Nowadays is very common to find fullscreen websites as it was in the past in the age of flash, but now, with the power of HTML, CSS and Javascript. 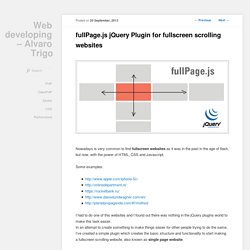 Some examples: I had to do one of this websites and I found out there was nothing in the jQuery plugins world to make this task easier. In an attempt to create something to make things easier for other people trying to do the same, I’ve created a simple plugin which creates the basic structure and functionality to start making a fullscreen scrolling website, also known as single page website. How I can make an autoplay of sliders · Issue #532 · alvarotrigo/fullPage.js. Jquery/jquery-mousewheel. Alvarotrigo/fullPage.js. Creating a full-page scrolling website with fullPage.js - Tutorial - Binpress. Fullscreen websites are everywhere, and it's highly likely that you'll wind up making at least one if you're a web designer. 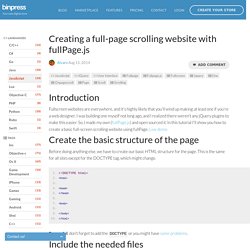 I was building one myself not long ago, and I realized there weren't any jQuery plugins to make this easier. So, I made my own (fullPage.js) and open sourced it. In this tutorial I'll show you how to create a basic full-screen scrolling website using fullPage. Live demo Before doing anything else, we have to create our basic HTML structure for the page. Be careful, don't forget to add the DOCTYPE or you might have some problems. We'll need to add four files: - jQuery - jQuery UI (Or its animation effects, at least.) - fullPage.js - fullPage's css file You can include them between the <head> tags of the page, although some people prefer to add the JavaScript files just before the closing </body> tag to improve content loading times. Let's add the files I named in the order detailed in the official documentation: Our file looks like this now: <!