Gulp for WordPress: Creating the Tasks. Share this: monday.com helps you manage your projects. 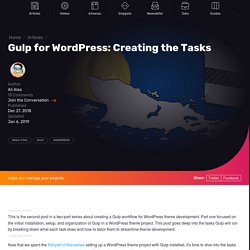 This is the second post in a two-part series about creating a Gulp workflow for WordPress theme development. Part one focused on the initial installation, setup, and organization of Gulp in a WordPress theme project. This post goes deep into the tasks Gulp will run by breaking down what each task does and how to tailor them to streamline theme development. Now that we spent the first part of this series setting up a WordPress theme project with Gulp installed, it's time to dive into the tasks we want it to do for us as we develop the theme.

Article Series: #Creating the style task Let’s start by compiling src/bundle.scss from Sass to CSS, then minifying the CSS output for production mode and putting the completed bundle.css file into the dist directory. Browsersync + Gulp.js. Building With Gulp. Optimizing your website assets and testing your design across different browsers is certainly not the most fun part of the design process. Luckily, it consists of repetitive tasks that can be automated with the right tools to improve your efficiency. Gulp is a build system that can improve how you develop websites by automating common tasks, such as compiling preprocessed CSS, minifying JavaScript and reloading the browser. In this article, we’ll see how you can use Gulp to change your development workflow, making it faster and more efficient. What Is Gulp?

Link Gulp1 is a build system, meaning that you can use it to automate common tasks in the development of a website. Gulp by itself doesn’t really do much, but a huge number of plugins are available, which you can see on the plugins page2 or by searching gulpplugin on npm. Other build tools are available, such as Grunt7 and, more recently, Broccoli8, but I believe Gulp to be superior (see the “Why Gulp?”

Automate Your Tasks Easily with Gulp.js. As developers we often need to look at the tools we use and decide if we are using the right tool for the job. 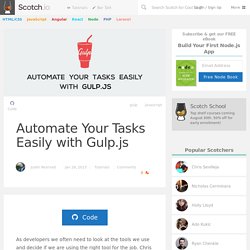 Chris did an awesome write up on Grunt early last year. But maybe Grunt just isn’t right for you. Gulp is a streaming build system, by using node’s streams file manipulation is all done in memory, and a file isn’t written until you tell it to do so. WPGulpTheme. WPGulp. A Tutorial for Getting Started with Gulp · Justin McCandless. A Beginners Guide to Package Manager Bower and Using Gulp to Manage Components.

Package managers like Composer for PHP and NPM for Node have become essential tools for simplifying a developer’s life. 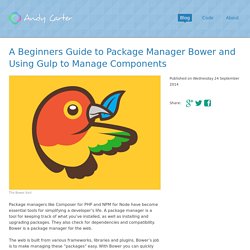 A package manager is a tool for keeping track of what you’ve installed, as well as installing and upgrading packages. They also check for dependencies and compatibility. Bower is a package manager for the web. The web is built from various frameworks, libraries and plugins. Bower’s job is to make managing these “packages” easy. Let’s Install Bower Bower uses Node, so make sure you’ve installed it before proceeding to install Bower. . $ node -v. Baby steps with gulp.js. I am working on a little front-end project to learn Backbone.js, and this presentation by Addy Osmani convinced me to invest the time to set up a proper continuous build workflow. 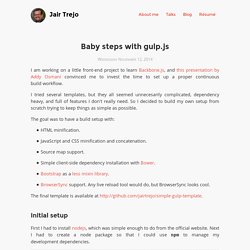 I tried several templates, but they all seemed unnecesarily complicated, dependency heavy, and full of features I don't really need. So I decided to build my own setup from scratch trying to keep things as simple as possible. The goal was to have a build setup with: HTML minification.JavaScript and CSS minification and concatenation.Source map support.Simple client-side dependency installation with Bower.Bootstrap as a less mixin library.BrowserSync support.

Any live reload tool would do, but BrowserSync looks cool. The final template is available at Initial setup First I had to install nodejs, which was simple enough to do from the official website. Gulp for Beginners. By Zell Liew On css injection, gulp Gulp is a tool that helps you out with several tasks when it comes to web development. 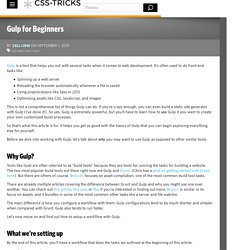 It's often used to do front end tasks like: Spinning up a web serverReloading the browser automatically whenever a file is savedUsing preprocessors like Sass or LESSOptimizing assets like CSS, JavaScript, and images. Advanced Gulp File - Mike Street - Front-end Developer from Brighton. Managing development and production assets with Gulp - Excodus. What is a task-runner? 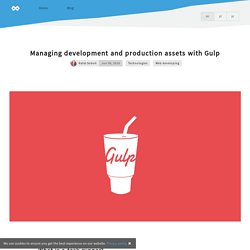 In this article I assume that you have basic knowledge about task-runners e.g. Gulp or Grunt. For newbies I'll only explain it briefly - they are tools for performing automated, programmable jobs. For example Semantic-UI framework, which I described earlier has build tools containing tasks for installing, combining, compiling assets. After running one command it creates four distribution files from several source files: semantic.css semantic.min.css semantic.js semantic.min.js Gulp has a lot of plugins available to download via npm, they can make some amazing things and are really well documented: Why should I need a task-runner? First of all - automation. One of the problems I stumbled upon during one project was to keep different assets on developer and production instances.

What is actually the problem? In our example we are going to manage client application written in AngularJS, which consists of HTML, JavaScript and LESS/CSS files. We will do the following: GitHub - jairtrejo/simple-gulp-template: A very simple gulpjs template.