SPACE: from science to fiction 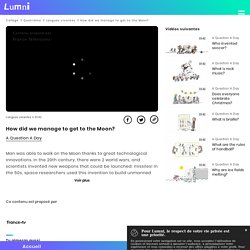 In the 20th century, there were 2 world wars, and scientists invented new weapons that could be launched: missiles! In the 50s, space researchers used this invention to build unmanned space probes that they sent to the Moon. Because humans have always dreamt of going there and have been fascinated by the Earth’s natural satellite for thousands of years. And for some countries, it was a way of proving their technological superiority. In the 50s and 60s, the United States and Russia were adversaries: it was the Cold War.

Today, the 2 countries are helping each other to reach a new space objective: the planet Mars! Nom de l'auteur : Jacques Azam. The War of the Worlds. War of the Worlds Radio Documentary Part 1. Sting - Russians. One Small Step - The Apollo 11 Mission Animated. How many planets are there in the solar system? Well, it’s hard to give an exact figure. 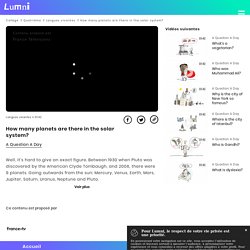 Between 1930 when Pluto was discovered by the American Clyde Tombaugh, and 2006, there were 9 planets. Going outwards from the sun: Mercury, Venus, Earth, Mars, Jupiter, Saturn, Uranus, Neptune and Pluto. But in 2006, another American, Mike Brown, nicknamed PlutoKiller, showed that Pluto is not the same as other planets. Why? Because it’s too small and not special enough; it’s just like many other objects in the region of Neptune, such as Eris, which he discovered in 2006.

Until 20 January 2016 that is… when Mike Brown, him again, and Konstantin Batygin, working together, said they had discovered a 9th planet by deduction. Nom de l'auteur : Jacques Azam. How can you live in a space station? In 1961, the Russian Yuri Gagarin was the first man to go into space. 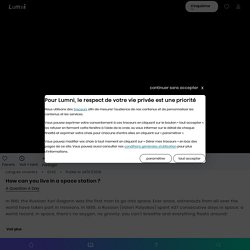 Ever since, astronauts from all over the world have taken part in missions. In 1995, a Russian (Valeri Polyakov) spent 437 consecutive days in space; a world record. In space, there’s no oxygen, no gravity: you can’t breathe and everything floats around! Astronauts live on board the ISS — the international space station — where air contains oxygen and the atmospheric pressure is the same as on Earth. This spacecraft also protect them from the burning rays of the sun and extreme temperatures: plus or minus 150°C.

What is an asteroid? An asteroid is an extra terrestrial body made of rock or metal… or both. 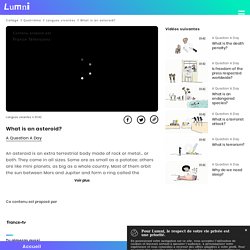 They come in all sizes. Some are as small as a potatoe; others are like mini planets, as big as a whole country. Most of them orbit the sun between Mars and Jupiter and form a ring called the “asteroid belt”. The solar system was formed out of a swirl of gas, dust and ice particles. These tiny particles joined together bit by bit to form bigger and bigger rocks, until they became planets. Have lots of women been in space? Women in space? 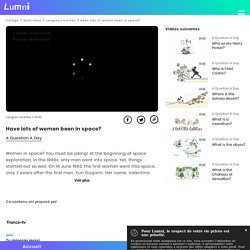 You must be joking! At the beginning of space exploration, in the 1960s, only men went into space. Yet, things started out so well. On 16 June 1963, the first woman went into space, only 2 years after the first man, Yuri Gagarin. Her name, Valentina Terechkova, a 26-year-old Russian. Because not many women want to be astronauts! L’Agence spatiale européenne lance sa campagne de recrutement d’astronautes. Avis aux admirateurs de Thomas Pesquet. 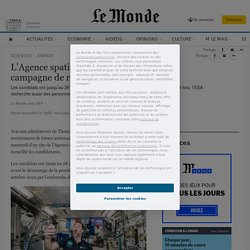