Can we do without plastic? - Vidéo Langues vivantes. Plastic… is fantastic! 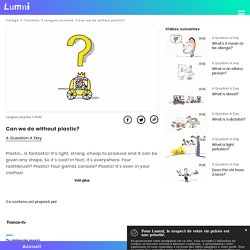 It’s light, strong, cheap to produce and it can be given any shape. So it’s cool! In fact, it’s everywhere. Your toothbrush? Plastic! Plastic is made of oil, plus various chemical products. Nom de l'auteur : Jacques Azam Producteur : Milan Presse, France Télévisions. What is an endangered species? - Vidéo Langues vivantes. It’s an animal or a plant in danger of disappearing from the face of the Earth. 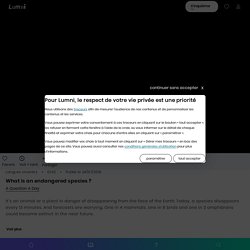 Today, a species disappears every 13 minutes. And forecasts are worrying. One in 4 mammals, one in 8 birds and one in 3 amphibians could become extinct in the near future. Since life appeared on our planet, the number of species has constantly evolved. Some die out and others appear. Nom de l'auteur : Jacques Azam Producteur : Milan Presse, France Télévisions. What is light pollution? - Vidéo Langues vivantes. 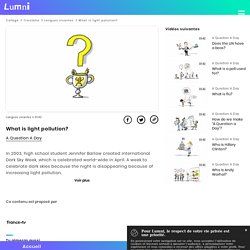 A week to celebrate dark skies because the night is disappearing because of increasing light pollution. Light pollution is not felt as much as air pollution because you have to be above the air to see the millions of city lights. In Europe 99% of the population can hardly see the stars. The whole world’s affected and 80% of all countries have light pollution. In Canada for example, Toronto has so many lights that the observatory had to close down. 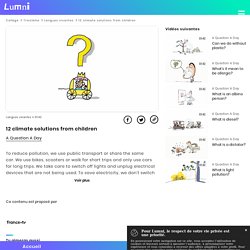 We use bikes, scooters or walk for short trips and only use cars for long trips. We take care to switch off lights and unplug electrical devices that are not being used. To save electricity, we don’t switch on lights during the day and we open the shutters. Why are ice fields melting? - Vidéo Langues vivantes. Ice all around the world is melting due to the effects of global warming. 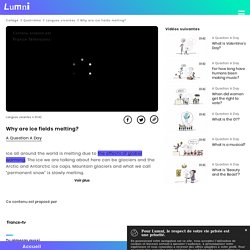 The ice we are talking about here can be glaciers and the Arctic and Antarctic ice caps. Mountain glaciers and what we call “permanent snow” is slowly melting. As the planet warms up, the ice cap breaks and melts more quickly. Scientists are worried that the more ice melts in summer, the harder it is to freeze again in winter. Ice that has been there for centuries is now diminishing. Nom de l'auteur : Jacques Azam Producteur : Milan Presse, France Télévisions. 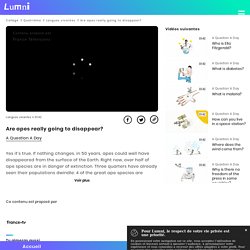 If nothing changes, in 50 years, apes could well have disappeared from the surface of the Earth. Right now, over half of ape species are in danger of extinction. Three quarters have already seen their populations dwindle: 4 of the great ape species are already close to extinction. If apes disappear, it’s mainly because their habitat, the forest is disappearing. Indeed, wild forests are being destroyed by man all over the planet. What is the 8th continent? - Vidéo Langues vivantes. This continent is very different from Africa, America, Antarctica, Asia, Europe and Oceania! 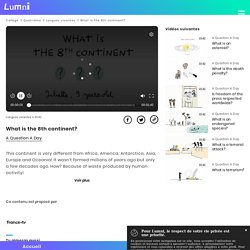 It wasn’t formed millions of years ago but only a few decades ago. How? How do we protect life in the oceans? - Vidéo Langues vivantes. There are 5 oceans on our planet: the Pacific, Atlantic, Indian, Arctic and the Antarctic… all linked to each other. 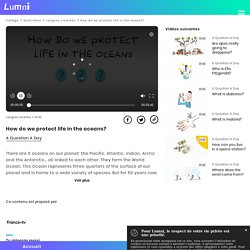 They form the World Ocean. This Ocean represents three quarters of the surface of our planet and is home to a wide variety of species. But for 50 years now, with the increase in pollution and fishing, ecologists have been sounding the alarm. Why must we protect the oceans? - Vidéo Langues vivantes. More than half the planet is covered by oceans. 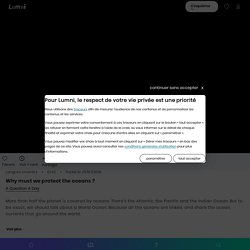 There’s the Atlantic, the Pacific and the Indian Ocean. But to be exact, we should talk about a World Ocean. Because all the oceans are linked, and share the ocean currents that go around the world. In the oceans there are hugely valuable natural resources such as fish or oil. Some businesses take too many of these reserves or create lots of pollution by doing so. Nom de l'auteur : Jacques Azam Producteur : Milan Presse, France Télévisions Année de copyright : 2018. Savoir dire 'Depuis quand ... ?' en anglais.

The Animals Save the Planet