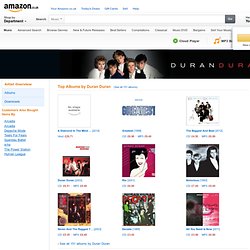 Formed in 1978 by John Taylor (bass) and Nick Rhodes (keyboards) in Birmingham, England, their most successful line-up also included Simon Le Bon (vocals), Andy Taylor (guitar) and Roger Taylor (drums). Between 1980 and 1983 they released three albums, Duran Duran (1981, re-released in the US in 1983), their best LP Rio (1982), and Seven and the Ragged Tiger (1983). These three albums spawned eight hit singles, most notably “Girls on Film”, “Rio”, “Hungry Like the Wolf” and “The Reflex”. They also released two other hit singles: “Wild Boys” was the only new song on live album Arena, and “View to a Kill” was the theme from fourteenth James Bond movie A View to a Kill. This was the final release with this line-up and was the pinnacle of their success. Duran Duran: Songs, Albums, Pictures, Bios. Fractals.

Hearts of Space. Fractale. Animate or movie making - web video. Visual Thinking Software. Visual Thinking. Graphics plus Fractals and Animations. How to Crush Self-Doubt and Become an Epic Human Being. Recently I was looking at some epic blogs written by amazing people. 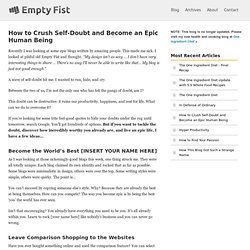 This made me sick. I looked at pitiful old Empty Fist and thought: “My design isn’t as sexy … I don’t have very interesting things to share … There’s no way I’ll never be able to write like that… My blog is just not good enough.“ A wave of self-doubt hit me. Between the two of us, I’m not the only one who has felt the pangs of doubt, am I? This doubt can be destructive: it ruins our productivity, happiness, and zest for life. If you’re looking for some trite feel-good quotes to hide your doubts under the rug until tomorrow, search Google. Become the World’s Best [INSERT YOUR NAME HERE] As I was looking at those sickeningly-good blogs this week, one thing struck me. You can’t succeed by copying someone else’s style.

Isn’t that encouraging? Leave Comparison Shopping to the Websites Have you ever bought something online and used the comparison feature? Self-doubt always and only arises out of comparisons with others. Hypnotic Soundscapes (AudioTrances) Hearts of Space. High Spirits Flutes. Odell Borg, founder of High Spirits Flutes (www.highspirits.com), has been handcrafting Native American style flutes since 1990. 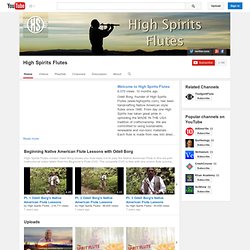 From day one High Spirits has taken great pride in upholding the MADE IN THE USA tradition of craftsmanship. We are committed to using sustainable, renewable and non-toxic materials. Each flute is made from raw, kiln dried wood that is domestic and plantation grown and finished with a non-toxic oil that protects and gives each flute its luster. All High Spirits flutes are constructed with a uni-body design, which means that they are crafted out of a single piece of raw unsplit wood.

The tolerances on each flute are precise and measurable to thousandths of an inch. All High Spirits flutes come with a free "How-to-Play" book and DVD that will guide you from never playing music to creating your own melodies. If you are a first-time player make sure to look into our packages for beginning players. Bevani Flute. Irish flute - Topic. Dinesh Flute. Jennifer Margaret Barker. Celtic Flute Music - Gearr Aonach - composer Jennifer Margaret Barker 281,425 views 5 years ago Titled 'Gearr Aonach', this piece is the first movement of a three-movement work for flute and piano (titled 'Na Tri Peathraichean'), written by Scottish-American composer Jennifer Margaret Barker. 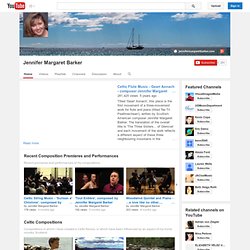 The translation of the overall title is 'The Three Sisters... of Glencoe' and each movement of the work reflects a different aspect of these three neighbouring mountains in the Highlands of Scotland. The flautist is Laurie Baefsky and the pianist is the composer. The footage was filmed in Scotland by British cameraman John Anthony Palmer. Sheet music for this piece is available from Flute World ( Search under 'Barker' for the composer. Hypnotic Soundscapes. Thelondonpianoman. Michael Walthius. Steven Cravis. MANY PEOPLE requested my piano arrangement. 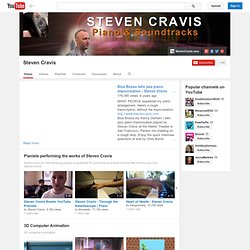 Here's a rough transcription, without the improvisation: Bossa (by Kenny Dorham ) latin jazz piano improvisation played by Steven Cravis at the Herbst Theater in San Francisco. Pardon me chewing on a cough drop. Enjoy the quick interview questions at end by Chris Burns Comedy ! Want to see this video with a BLUE shade to it? First STOP this video from playing or let it finish to the end, then Click here: Steven Cravis wants to congratulate all of Rio De Janeiro, Brazil on being granted the 2016 Olympics Update! Steven Cravis - Topic. Hypnosis Collective Tree.