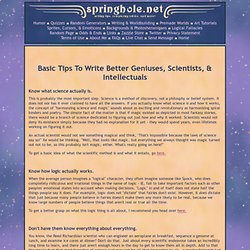 This is probably the most important step. Science is a method of discovery, not a philosphy or belief system. It does not nor has it ever claimed to have all the answers. If you actually know what science is and how it works, the concept of "harmonzing science and magic" sounds about as exciting and revolutionary as harmonizing spiral binders and poetry. The simple fact of the matter is that if magic existed as depicted in most fantasy stories, there would be a branch of science dedicated to figuring out just how and why it worked.

An actual scientist would not see something magical and think, "That's impossible because the laws of science say so! " To get a basic idea of what the scientific method is and what it entails, go here. Know how logic actually works. To get a better grasp on what this logic thing is all about, I recommend you head over here. Don't have them know everything about everything. Don't make (all of) them dry and dull. See Also: Write Better (And More Likeable) Badasses. Yet another character type that is often poorly-written by amateurs, many badass characters end up becoming completely unlikeable or even despicable. 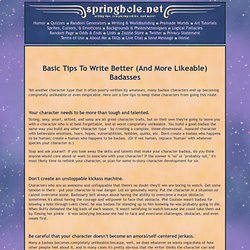 Here are a few tips to keep these characters from going this route. Your character needs to be more than tough and talented. Strong, sexy, smart, skilled, and sassy are all great character traits, but on their own they're going to leave you with a character who is at best forgettable, and at worst completely unlikeable. You build a good badass the same way you build any other character type - by creating a complex, three-dimensional, nuanced character with believable emotions, fears, hopes, vulnerabilities, hobbies, quirks, etc. Don't create a badass who happens to be human; create a human who happens to be badass. Stop and ask yourself: if you took away the skills and talents that make your character badass, do you think anyone would care about or want to associate with your character?

Writing Cute Characters. Now, while all of these traits are considered "cute," it's of utmost importance to remember that a character need not exhibit all of them to be perceived as cute. 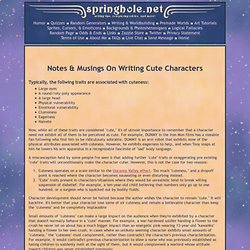 For example, DUMMY in the Iron Man films has a sizeable fan following who find him to be ridiculously adorable. DUMMY is an arm robot that exhibits none of the physical attributes associated with cuteness. However, he exhibits eagerness to help, and when Tony snaps at him he lowers his arm apparatus in a recognizable fascimile of "sad" body language.

A misconception held by some people I've seen is that adding further "cute" traits or exaggerating pre-existing "cute" traits will unconditionally make the character cuter. However, this is not the case for two reasons: Cuteness operates on a scale similar to the Uncanny Valley effect. Character development should never be halted because the author wishes the character to remain "cute. " Write Better & More Despicable Villains. Show your villain personally doing something despicable. 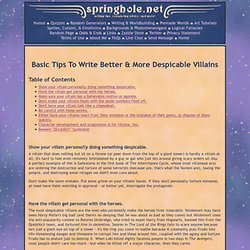 A villain that does nothing but sit on a throne (or peer down from the top of a giant tower) is hardly a villain at all. It's hard to feel even remotely intimidated by a guy or gal who just sits around giving scary orders all day. A perfect example of this is Galbatorix in the first book of The Inheiritance Cycle, whose most villainous acts are ordering the destruction and torture of some terrorists (because yes, that's what the Varden are), taxing the people, and destroying some villages we didn't even care about. Don't make the same mistake. Put some grime on your villains' hands. Have the villain get personal with the heroes.

The most despicable villains are the ones who personally make the heroes lives' miserable. Make sure your villain has a believable motive or agenda. First of all, unless you don't intend your work to be taken seriously, you should never write a villain who does anything Just Because It's Evil.