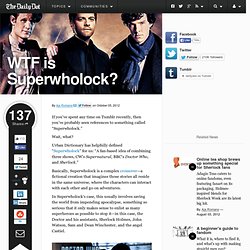 Wait, what? Batcows: Steal their look - Superwholock fandom ... Sherlock Isn’t the Fan-Friendly Show You Think It Is. When journalists and fans gathered in London last month for an advance screening of the first episode of Sherlock’s third season, show creators Steven Moffat and Mark Gatiss joined costars Benedict Cumberbatch and Martin Freeman for a Q&A. 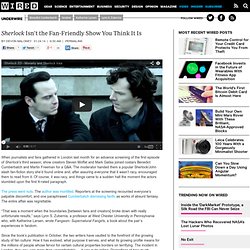 The moderator handed them a popular Sherlock/John slash fan-fiction story she’d found online and, after assuring everyone that it wasn’t racy, encouraged them to read from it. Of course, it was racy, and things came to a sudden halt the moment the actors stumbled upon the first X-rated paragraph. The press went nuts. Bronies Are Redefining Fandom — And American Manhood. On the internet, no one knows you’re a pony. 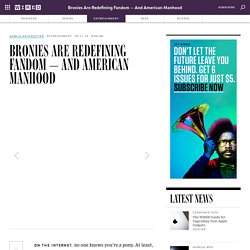 At least, they don’t have to. When the largely male, largely adult contingent of My Little Pony Friendship Is Magic fans now known as “bronies” emerged shortly after the show’s premiere three years ago, they were a largely disorganized, largely anonymous band haunting places like 4chan’s /co/ and /b/ boards. They got trolled. Brony Stupidity. 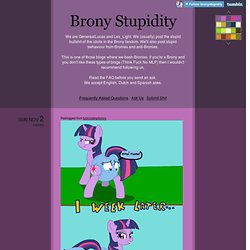 Just a thought. Well obviously, tumblrinas who constantly rant about rape culture have often be found to flood their panties with rape, abuse and pedophilia in yaoi. I am sure there would be even sane feminists that are ashamed by that kind of stuff done by misandrists that consider themselves “feminists” and shame the reputation of the feminism movement.

In fact, if I remember well, Lauren Faust was against that kind of “feminism”. Ur a nerd. Die hard fan lands dream role in Downton Abbey (From The Bolton News) A DIE-hard Downton Abbey fan is delighted to have landed a role in his favourite programme. 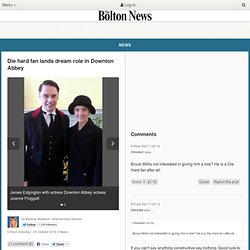 Harwood singer and actor James Edgington will appear on television screens tomorrow evening in Julian Fellowes' hit ITV period drama. The 31-year-old, one half of 2010 Britain’s Got Talent finalists Father and Son with dad Graham, filmed the scene with former Coronation Street actress Joanne Froggatt in April. Mr Edgington, who studied theatre and performance at Manchester Metropolitan University, said: “I was told I wouldn’t stand a chance because I was a Northerner and they wanted a Londoner, but they said, can we see you anyway?” The former Bolton School pupil prepared extensively for the audition, including attending acting classes and working on his accent. Mr Edgington, whose musical theatre show Voices and Lyrics is returning to Bolton’s Octagon Theatre in December, said: “I totally geeked out on it. Fandom as Pathology: “Us” vs “Them” Media Scholar, Joli Jensen, in her essay “Fandom as Pathology: The Consequences of Characterization” highlights the academic characterization of fans as the other. 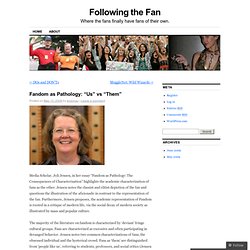 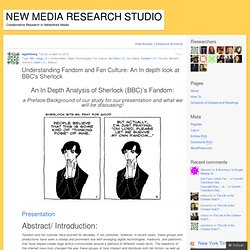 Presentation Abstract/ Introduction: Fandom, Fanservice, and the relationship between Sherlock and its fandom (updated 3/11/14) Refashioning Sherlock: Fandom, Digital Spaces and Performativity. Your Friend Elle: Sherlock and the Fans, Has it Gone Too Far? Unpopular opinion, I did not like season three of Sherlock. 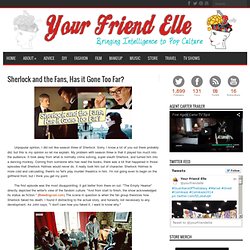 Sorry, I know a lot of you out there probably did, but this is my opinion so let me explain. My problem with season three is that it played too much into the audience. It took away from what is normally crime solving, super sleuth Sherlock, and turned him into a dancing monkey. Coming from someone who has read the books, there was a lot that happened in those episodes that Sherlock Holmes would never do. It really took him out of character. Sherlock and Doctor Who: beware of fans influencing the TV they love. Doctor Who and Sherlock are linked by inspiration – Steven Moffat and Mark Gatiss write for both – and by impact: the shows were awarded the prime seasonal drama slots on Christmas Day and New Year's Day respectively. 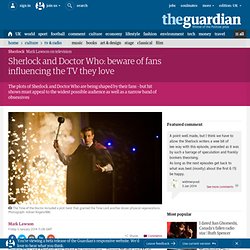 But those special editions also demonstrated another connection between them: these series are significantly redefining the relationship between television programmes and fans. For most of the history of TV drama, fans have been on the outside looking in. New episodes or series were released by the creators for consumption by the audience, whose only possible effect on the product was to raise or lower the ratings figures that might influence whether a new series was commissioned. More recently, websites and social media have changed beyond recognition the way in which a show is watched, through preview, real-time and review discussion between viewers. Tlon, fandom, and source texts: The effect of fan works on the narrative of "Supernatural" 1. 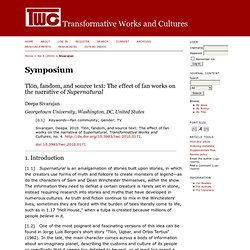 Introduction [1.1] Supernatural is an amalgamation of stories built upon stories, in which the creators use forms of myth and folklore to create monsters of legend—as do the characters of Sam and Dean Winchester themselves, within the show. The information they need to defeat a certain creature is rarely set in stone, instead requiring research into stories and myths that have developed in numerous cultures. As truth and fiction continue to mix in the Winchesters' lives, sometimes they are faced with the burden of tales literally come to life, such as in 1.17 "Hell House," when a tulpa is created because millions of people believe in it.

Evaluating fan power – The influence of online fandom on film production, promotion and distribution. Introduction: Fandom and the active audience “I’m your number one fan.” Whether spoken by a teenager at a science-fiction convention or by Annie Wilkes (Kathy Bates) in Misery (Rob Reiner, USA 1990), these words can be just as distressing as they can be gratifying. To Boldly Go Online - Fandom Communities in the Digital Age.

Srinivas 4 The approach of aca-fans and scholars of especially the second wave of fan studies have utilized some media and social theory in their work in order to explain the particular nature of the functioning of fandom. T he term ‘poaching’ as it appears in the book Textual Poachers, by Henry Jenkins was first ideated in Michel de Certeu’s book The Science of Everyday Life. De Certeau argues that audiences are not passive consumers but instead active interpreters. He suggests that people do in fact attach their own meanings to the texts that they read, reaching beyond the limits drawn by academicians or scholars, thus bypassing a possible cultural monopoly.