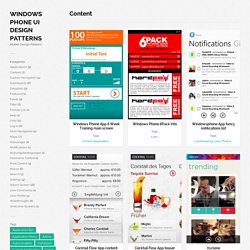 Tags: Custom Application Lists. Introduction To Designing For Windows Phone 7 And Metro. Microsoft’s new mobile operating system, Windows Phone 7 (WP7), introduces a fresh approach to content organization and a different UX, based on the Metro design language and principles that will be incorporated into Windows 8. 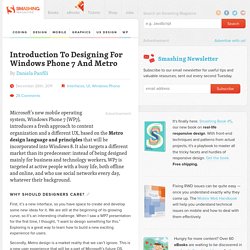 It also targets a different market than its predecessor: instead of being designed mainly for business and technology workers, WP7 is targeted at active people with a busy life, both offline and online, and who use social networks every day, whatever their background. Why Should Designers Care? Link First, it’s a new interface, so you have space to create and develop some new ideas for it. We are still at the beginning of its growing curve, so it’s an interesting challenge. Secondly, Metro design is a market reality that we can’t ignore. A New Approach To Design Link The Windows Phone team was inspired by the typography in way-finding design1. 2Grid Systems in Graphic Design, by Josef Müller-Brockman. Icon Size Guides Archives - Simple Android Icon Size Guide for Lollipop 5.1 | Adam Parrish What icon sizes do I need for Android 5?

Android 5.1 Lollipop continues with the same sensible icon size methodology as Android 4.1 As technology has evolved, phone & tablet manufacturers have created screens with ever increasing resolutions and pixel density. An increase in pixel density or dots per inch (dpi), means more image information… Read more » Free icon maker software review – which is the best? | Tanya How good are free icon maker tools? Windows Ico Explained Windows IconsWindows ICO Specification You can view all the Windows icon sizes within the file explorer Windows icons can be more complicated than you might think As with all the other software platforms that support icons files, Icons for Windows have there very own set of sizes and specifications. Android Icon Size Guide Made Simple (4.1) 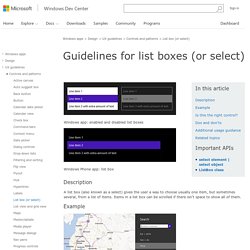 Items in a list box can be scrolled if there isn’t space to show all of them. Example Is this the right control? Use a list box when the items are important enough to display prominently. Factors that indicate against using a list box include: There are a very small number of items. Dos and don'ts Verify that the purpose of the list box, and which items are currently selected, is clear.Reserve visual effects and animations for touch feedback, and for the selected state of items.Limit the list box item’s text content to a single line. Additional usage guidance. Cards - Components - Google design guidelines. The primary action in a card is typically the card itself. 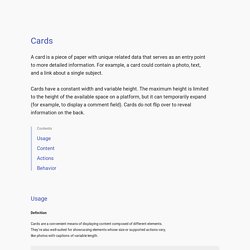 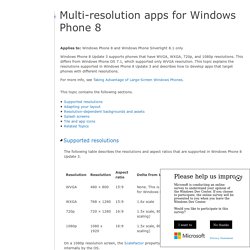 You don’t have to consider the internals of how each control stretches and flows. In Windows Phone 8 Update 3, you have to lay out controls and other UI elements to look good in each of the supported aspect ratios. Since Windows Phone 8 Update 3 phones can have one of two aspect ratios – 15:9 or 16:9 - controls laid out for one aspect ratio may be laid out unexpectedly at the other aspect ratio. To make a page render correctly on phones with WVGA, WXGA, 720p, and 1080p resolutions, don’t hard-code the height and width or the margins of the controls. After you drag and drop controls from the Toolbox, delete or carefully test the Margins that were added automatically. To create an adaptable layout, you can use a container like the Grid control.