Cardboard – Google. Evolution of a Maker Space, From “Monstie Stuffie” Projects to a Giant Catapult. LittleBits activities at the circulation desk in Colleen Graves’s school library. 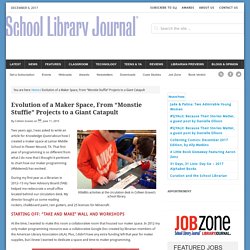 Two years ago, I was asked to write an article for Knowledge Quest about how I created a maker space at Lamar Middle School in Flower Mound, TX. That first year of programming is so different from what I do now that I thought it pertinent to chart how our maker programming (#Makered) has evolved. During my first year as a librarian in 2012–13 my Teen Advisory Board (TAB) helped me redecorate a small office located behind our circulation desk. My director bought us some reading rockers, chalkboard paint, rain gutters, and 25 licenses for Minecraft. Starting off: “Take and Make” wall and workshops At the time, I wanted to make this room a collaborative room that housed our maker space. How the Lamar Middle School maker space evolved.

In late April 2013, my TAB members helped me pick out some maker workshop ideas from the collaborative Google doc started by librarian P.C. Arduino, Magic 8 Balls, and a Theremin. ISTE 2015: Takeaway Tips for a Library Maker Space. Maker station at the ISTE Librarians Digital Age Playground at the 2015 ISTE conference in Philadelphia. 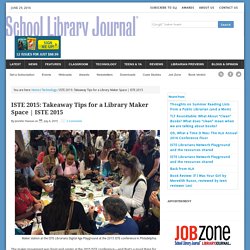 The maker movement was front and center at the 2015 ISTE conference—and that’s a good thing for me. After following maker initiatives with great interest for some time now, I have the opportunity to design a maker space this year for 6th–12th grade students at my school, Worcester (MA) Academy. A search of this year’s program at ISTE, held June 28 to July 1 in Philadelphia, using the term “constructivist learning/maker movement” resulted in 67 related sessions. The ISTE Librarians Network hosted a maker station at their Digital Age Playground and convened a panel on library maker spaces, featuring elementary and middle school librarians, a school administrator, and the coordinator of a public library maker initiative. 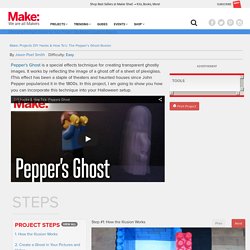 Makerspace - Inspiration on Pinterest. Stop motion puppetry with Sugru. The Pop-Up/Mobile Makerspace Moment. After researching MakerSpaces to write some blog posts here, Christie and I recently put together proposals (which were approved) for Pop-Up Mobile MakerSpaces at our libraries. 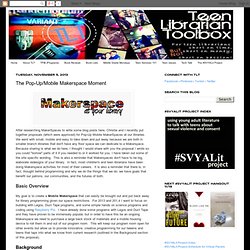 We went with small, mobile and easy to take down and put away because we are both in smaller branch libraries that don't have any floor space we can dedicate to a Makerspace. Because sharing is what we do here, I thought I would share with you the proposal I wrote so you could "borrow" parts of it if you needed to or it worked for you. I have taken out some of the site specific wording. This is also a reminder that Makerspaces don't have to be big, elaborate redesigns of your library. In fact, most children's and teen librarians have been doing Makerspace activities for most of their careers. 3D Ink™ brand plastic filament. ABS 3mm. 3Doodler: The World's First 3D Printing Pen by WobbleWorks LLC. 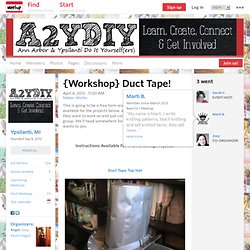 We'll have instructions available for the projects below, and people should pick something they want to work on and just come to hang out and craft with a group. MakerspaceSuccess_Slides.pdf. MakerBridge. 3D Systems Inc. - The MakerLab Club Application. The MAKERLAB CLUB An Initiative of 3D Systems in partnership with YALSA and ASTC Membership Application due: 5 PM Eastern Standard Time On Monday, November 17th, 2014 Submit Application Below 3D System’s, in collaboration with the American Library Association and the Association of Science and Technology Centers is committed to expanding young people’s access 21st century tools that can help them learn and create, including 3D Design, 3D Scanning and 3D Printing. 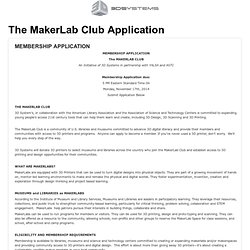 The MakerLab Club is a community of U.S. libraries and museums committed to advance 3D digital literacy and provide their members and communities with access to 3D printers and programs. Knitting together literacy, technology & creativity into one school library & Makerspace. » Schedule. Exploratorium's The Art of Tinkering Pop-up Shop. Instructables - DIY How To Make Instructions.