World’s 'doomsday' clock will stay at three minutes to midnight. In its symbolic look at the likelihood of armageddon, members of the Bulletin of the Atomic Scientists announced today that they are keeping the world's so-called Doomsday Clock at three minutes to "midnight" — a metaphor for the end of the world as we know it. 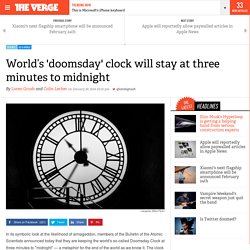 The clock has been set at 11:57PM since January 2015, when it was moved down from five minutes to destruction. It's the closest the clock has been to midnight since the Cold War in the 1980s. The Bulletin scientists cited a number of reasons why the clock is staying right where it is. Notably, tensions between the United States and Russia are fairly high, reminiscent of their Cold War-era levels; the Bulletin is concerned that the two nations are unlikely to discuss any future arms control measures. And while President Obama signed a major, if controversial, deal to prevent Iran from obtaining a nuclear weapon, North Korea tested a nuclear weapon of its own earlier this month. The symbol of the Swastika and its 12,000-year-old history. 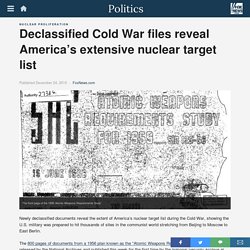 The 800 pages of documents from a 1956 plan known as the “Atomic Weapons Requirements Study” were released by the National Archives and published this week for the first time by the National Security Archive at George Washington University. “As far as can be told, no comparable document has ever been declassified for any period of Cold War history,” the organization said, while calling the Strategic Air Command study a “chilling” document depicting plans to attack population centers filled with civilians. The study includes thousands of targets or “designated ground zeros” -- spanning 1,200 cities. 8 things you didn't know about mistletoe. Mistletoe is a staple of holiday decorating, and we all know what to do when we find ourselves standing beneath it. 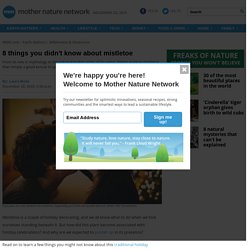 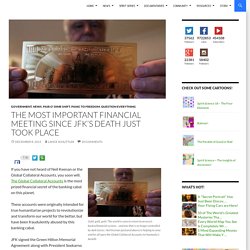 The world is soon to return to an asset-backed financial system…and one that is no longer controlled by dark forces. History, Travel, Arts, Science, People, Places. “Enough shovels to go around”: Ars looks back at the lies of the Cold War. In the fall of 1971, I got my first taste of what the Cold War was really about. 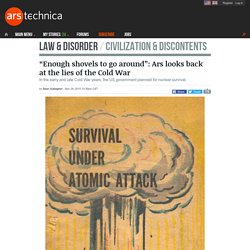 I was in the second grade at Coram Elementary School. As an alarm sounded, my teacher, Mrs. Cohen, led us out of the classroom into the school's brick-lined central hallway and told us to kneel with our heads down in the "duck and cover" position. "Why are we doing this? " I asked her. This Is What The Rich And Powerful Don't Want You To Know About Nikola Tesla - Higher Perspectives. At the end of his life, Nikola Tesla died penniless. 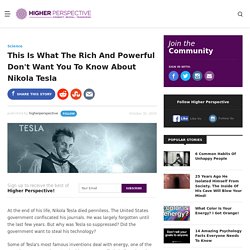 The United States government confiscated his journals. How Railroad History Shaped Internet History. Council Bluffs is a mid-sized town in Iowa, right on that state’s border with Nebraska. 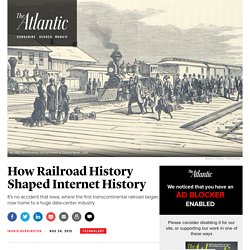 Although better known for cultivating presidential candidates than server racks, Iowa is a pretty popular site for data centers, especially new data centers built by major tech companies. Microsoft, Google, and Facebook have all built custom data centers in the state over the past seven years, and all three are expanding in the region. Many forces have come together to shape Iowa’s data-center industry (which will be discussed in further detail in another story), but it’s the state’s history as a junction for another major network—railroads—that put it at the top of my list for Cloud sightseeing.

My favorite part of looking for network infrastructure in America is really all the ghosts. Networks tend to follow networks, and telecommunications and transportation networks tend to end up piled on top of each other. De Beers myth: Do people spend a month's salary on a diamond engagement ring? Some say you should spend three months' salary on an engagement ring. 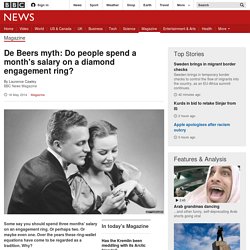 Or perhaps two. Or maybe even one. Over the years these ring-wallet equations have come to be regarded as a tradition. History, Travel, Arts, Science, People, Places. The Unlikely Struggle Of The Family Whose Neighbor Is Area 51. By the Reflection of What Is. Plate 2. 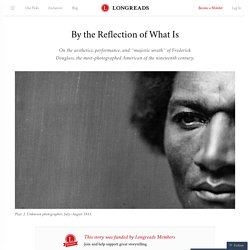 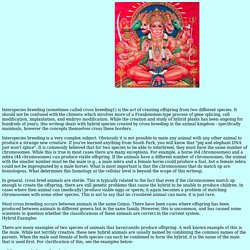 It should not be confused with the chimera which involves more of a Frankenstein-type process of gene splicing, cell modification, implantation, and embryo modification. While the creation and study of hybrid plants has been ongoing for hundreds of years, this writeup deals with hybrid species created by cross breeding in the animal kingdom - specifically mammals, however the concepts themselves cross these borders. Interspecies breeding is a very complex subject. Obviously it is not possible to mate any animal with any other animal to produce a strange new creature.

If you've learned anything from South Park, you will know that "pig and elephant DNA just won't splice". In general, cross bred animals are sterile. Heroin: A Hundred-Year Habit. In 1898 a German chemical company launched a new medicine called ‘Heroin’. A hundred years later, this drug is flooding illegally into Britain in record amounts. The latest Home Office figures show a 40 per cent increase in police seizures of heroin.

The National Criminal Intelligence Service believes that up to 80 per cent of the heroin currently entering Britain is controlled by Turkish organised criminals based in London and the South-East. How, then, did nineteenth-century science come to bequeath this notorious drug of abuse to twentieth-century crime? Heroin: A Hundred-Year Habit.