Forbes Welcome. Earth Life Can Be Designed To Make Silicon-Carbon Bonds. 'Evidence of life on Mars' found in NASA Spirit rover images, say scientists. Scientists have reviewed images taken by the Spirit rover nearly a decade ago, and have concluded that NASA may have previously overlooked evidence contained in them that could point towards them being biosignatures for past early forms of life in outer space on the planet. 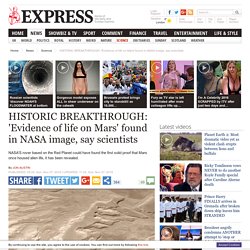 A new study published in Nature Communications suggests rocky outcrops and regoliths formed of opaline silica that the rover photographed in the Gusev crater in 2007 potentially have these biosignatures, which are natural traces of current or past life. Vue: Your Everyday Smart Glasses by Vue. Or swipe to cycle through songs Your frames function the way you want them to. 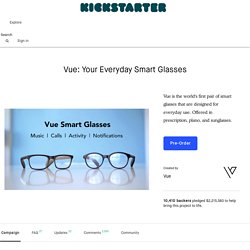 Use the app to pair gestures with custom actions tied to your phone, like hearing the current time, weather, activity summary, and more. Vue ensures you’re safe whether you’re a pedestrian, cyclist or driver. Hear turn-by-turn navigation without having to look at your phone. Vue’s open ear design allows you to listen to directions, music or calls without blocking your ears, so you can still hear traffic and the world around you. Introduction to Astronomy. Our 86 Billion Neurons: She Showed It. The Human Advantage: A New Understanding of How Our Brain Became Remarkable by Suzana Herculano-Houzel MIT Press, 256 pp., $29.95 Reading about the brain is as fascinating as it is demanding. 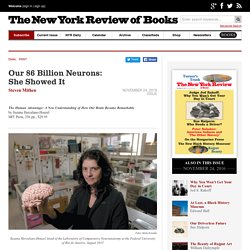 During the last decade we have had a steady stream of books purporting to explain how the brain works and its relationship to mind, consciousness, creativity, and many other qualities that might give us humans an advantage over other types of animals. [windows] Failed to run pipe server with low integrity and EPM support attributes - Windows Desktop Help. Better Buy: Ziopharm Oncology, Inc. vs. Juno Therapeutics. Image source: Getty Images. 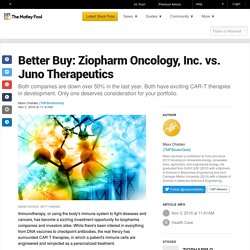 Immunotherapy, or using the body's immune system to fight diseases and cancers, has become a sizzling investment opportunity for biopharma companies and investors alike. While there's been interest in everything from DNA vaccines to checkpoint antibodies, the real frenzy has surrounded CAR-T therapies, in which a patient's immune cells are engineered and reinjected as a personalized treatment. One darling of the CAR-T boom has been Juno Therapeutics (NASDAQ:JUNO), which will be among the first companies to submit an application to the U.S.

Food and Drug Administration for approval. UUA. ‘Next year or the year after, the Arctic will be free of ice’ Peter Wadhams has spent his career in the Arctic, making more than 50 trips there, some in submarines under the polar ice. 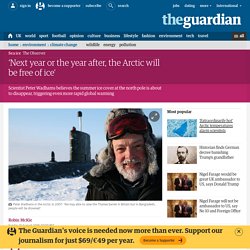 He is credited with being one of the first scientists to show that the thick icecap that once covered the Arctic ocean was beginning to thin and shrink. He was director of the Scott Polar Institute in Cambridge from 1987 to 1992 and professor of ocean physics at Cambridge since 2001. Solanezumab. In Phase 1, single doses of 0.5, 1.5, 4.0, or 10.0 mg/kg of solanezumab were well-tolerated in healthy volunteers and 19 patients with mild to moderate AD. 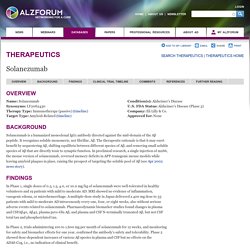 MRI showed no evidence of inflammation, vasogenic edema, or microhemorrhage. A multiple-dose study in Japan delivered a 400 mg dose to 33 patients with mild to moderate AD intravenously every one, four, or eight weeks, also without serious adverse events related to solanezumab. Pimp up the touchpad of your notebook - Linux Mint Community. Although equipped with a very capable driver by now, the standard installation brought up the touchpad of my Asus UX-32A Zenbook in a state in which it was indeed usable from the first moment on, but without any of its more advanced features. 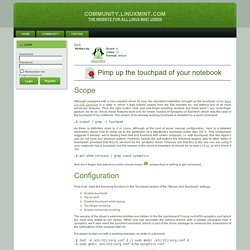 Thus the right button click and one-finger scrolling worked, but there wasn’t any multi-finger gesture. As far as I know, these features work only for newer models of Synaptics or Elantech, which was the case of the touchpad of my notebook. The vendor of an already working touchpad is revealed by a quick command: …$ xinput | grep -i touchpad. Scientific language is becoming more informal. We are not supposed to use first-person pronouns, and contractions aren’t allowed. 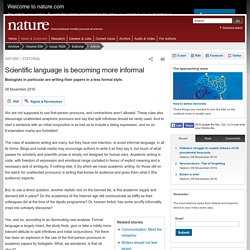 These rules also discourage unattended anaphoric pronouns and say that split infinitives should be rarely used. And to start a sentence with an initial conjunction is as bad as to include a listing expression, and so on. Exclamation marks are forbidden! The rules of academic writing are many, but they have one intention: to avoid informal language, in all its forms. Juno-therapeutics-on-a-roll-in-q3-with-celgenes-ca. Juno Therapeutics (NASDAQ:JUNO) announced its third-quarter earnings results on Wednesday after the market closed. 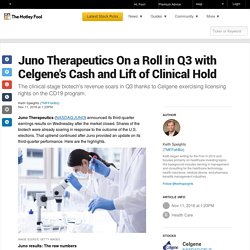 Shares of the biotech were already soaring in response to the outcome of the U.S. elections. That uptrend continued after Juno provided an update on its third-quarter performance. Here are the highlights. Image source: Getty Images. Juno results: The raw numbers. Serbia deports Russians suspected of plotting Montenegro coup. Serbia has deported a group of Russians suspected of involvement in a coup plot in neighbouring Montenegro, the Guardian has learned, in the latest twist in a murky sequence of events that apparently threatened the lives of two European prime ministers. 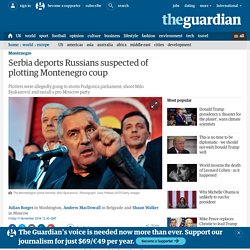 The plotters were allegedly going to dress in police uniforms to storm the Montenegrin parliament in Podgorica, shoot the prime minister, Milo Ðjukanović, and install a pro-Moscow party. The Russian fingerprints on the October plot have heightened intrigue about Moscow’s ambitions in a part of Europe hitherto thought to be gravitating towards the EU’s orbit. A group of 20 Serbians and Montenegrins, some of whom had fought with Moscow-backed separatists in eastern Ukraine, were arrested in Podgorica, the Montenegrin capital. In Serbia, meanwhile, several Russian nationals suspected of coordinating the plot were caught with €120,000 and special forces uniforms.

The Seattle biotech company reported revenue of $20.8 million for the quarter, compared to revenue of $1.6 million for the same quarter last year. The boost was largely tied to a partnership agreement with Celgene. Meanwhile, its cash burn increased to $59.5 million during the quarter, as Juno continued to accumulate losses as it works on experimental cancer therapies and moves toward manufacturing of its drug therapies. Shares of the company soared 12 percent today, jumping to $28.41.The stock is still down 35 percent so far this year.

It went public at $24 per share in December 2014. Barracuda Konzu: The World's Most Advanced Backpack by Barracuda. Kickstarter Collections Projects We Love Saved. Arnold Schwarzenegger Still In Shape - Workout 2016 at 70 yro (Motivation) Schindler's List factory to be turned into Holocaust memorial. A disused factory in the Czech Republic where German industrialist Oskar Schindler employed more than a thousand Jews to save them from the gas chambers is to host a Holocaust memorial, officials have said. Stólar — Sólóhúsgögn. How to Tighten Loose Chairs. Stærsti geimsjónauki heims tilbúinn. The environmental BAT Group (best available technique) Livet på landet - 49.000 skrabehøner. Juno Therapeutics to Highlight CAR T Advances in B-cell Malignancies at ASH 2016. Juno Therapeutics, Inc. (JUNO), a biopharmaceutical company focused on re-engaging the body’s immune system to revolutionize the treatment of cancer, today announced that seven oral and four poster presentations detailing updated clinical and preclinical results generated in partnership with its collaborators will be presented at the 58th American Society of Hematology (ASH) Annual Meeting.

Senior executives will also review results and provide an update on Juno’s clinical development program at an analyst and investor event, which will also be available via webcast. “Presentations at ASH will showcase new data that support our best-in-class CAR T strategy across a range of B-cell malignancies,” said Mark J. Gilbert, M.D., Juno’s Chief Medical Officer. “The responses we are seeing with our product candidates, including updated JCAR017 results in adults with relapsed/refractory NHL, demonstrate the potential of our CAR T programs for patients in need of more treatment options. Cold fusion - Wikipedia. Diagram of an open-type calorimeter used at the New Hydrogen Energy Institute in Japan Cold fusion is a hypothetical type of nuclear reaction that would occur at, or near, room temperature, compared with temperatures in the millions of degrees that are required for "hot" fusion.

It was proposed to explain reports of anomalously high energy generation under certain specific laboratory conditions. The original experimental results which were touted as evidence for cold fusion were not replicated consistently and reliably, and there is no accepted theoretical model of cold fusion. Cold fusion. Better-buy-juno-therapeutics-vs-inovio-pharmaceuti.