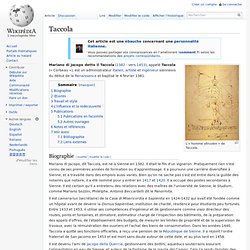 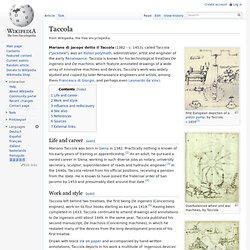 Taccola is known for his technological treatises De ingeneis and De machinis, which feature annotated drawings of a wide array of innovative machines and devices. Taccola’s work was widely studied and copied by later Renaissance engineers and artists, among them Francesco di Giorgio, and perhaps even Leonardo da Vinci. Life and career[edit] Mariano Taccola was born in Siena in 1382. Work and style[edit] Taccola left behind two treatises, the first being De ingeneis (Concerning engines), work on its four books starting as early as 1419.[5] Having been completed in 1433, Taccola continued to amend drawings and annotations to De ingeneis until about 1449. 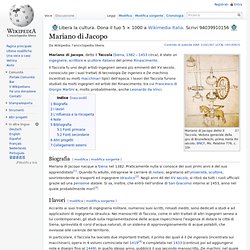 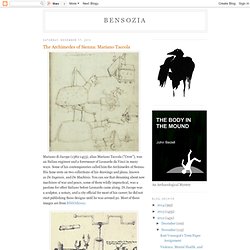 Some of his contemporaries called him the Archimedes of Sienna. His fame rests on two collections of his drawings and plans, known as De Ingensis, and De Machinis. You can see that dreaming about new machines of war and peace, some of them wildly impractical, was a pastime for other Italians before Leonardo came along. Di Jacopo was a sculptor, a notary, and a city official for most of his career; he did not start publishing these designs until he was around 50. Impossible world: Art: Classic artworks. Mariano di Jacopo detto il Taccola (1382 – 1453), called Taccola ('Crow') was an Italian administrator, artist and engineer of the early Renaissance. 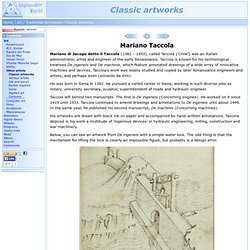 Taccola is known for his technological treatises De ingeneis and De machinis, which feature annotated drawings of a wide array of innovative machines and devices. Taccola’s work was widely studied and copied by later Renaissance engineers and artists, and perhaps even Leonardo da Vinci. He was born in Siena in 1382. He pursued a varied career in Siena, working in such diverse jobs as notary, university secretary, sculptor, superintendent of roads and hydraulic engineer. DMD - Database Machine Drawings. Taccola - [TPE Mouvement perpétuel] College Museum of Ancient Inventions: Kit Trepanation. Trebuchet, Siena, early 15th century CE by Ae-Ree Nam '99 (visiting), Swan Park '01 and Nisha Shah '01 The Trebuchet was invented by Mariano Taccola, "the Sienese Archimedes. 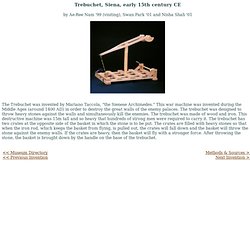 " This war machine was invented during the Middle Ages (around 1400 AD) in order to destroy the great walls of the enemy palaces. The trebuchet was designed to throw heavy stones against the walls and simultaneously kill the enemies. The trebuchet was made of wood and iron. College Museum of Ancient Inventions: Kit Trepanation. Keel Breaker, Sienna, 15th Century CE by Stacey Cooney and Dara Weinerman A keel breaker is a counterweight hull-piercing device. 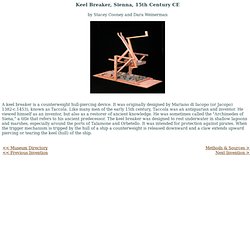 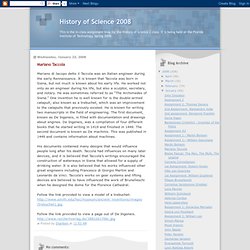 It is known that Taccola was born in Siena, but not much is known about his early life. He worked not only as an engineer during his life, but also a sculptor, secretary, and notary. He was sometimes referred to as “The Archimedes of Siena.” One invention he is well known for is the double-armed catapult, also known as a trebuchet, which was an improvement to the catapults that previously existed. He is known for writing two manuscripts in the field of engineering. 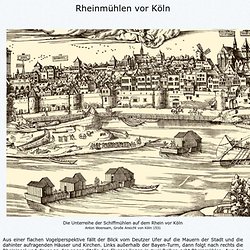