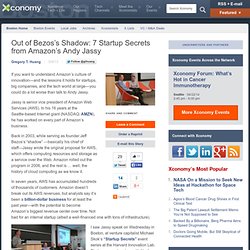 Huang5/9/13 If you want to understand Amazon’s culture of innovation—and the lessons it holds for startups, big companies, and the tech world at large—you could do a lot worse than talk to Andy Jassy. Jassy is senior vice president of Amazon Web Services (AWS). In his 16 years at the Seattle-based Internet giant (NASDAQ: AMZN), he has worked on every part of Amazon’s business.

Back in 2003, while serving as founder Jeff Bezos’s “shadow” —basically his chief of staff—Jassy wrote the original proposal for AWS, which offers computing resources and storage as a service over the Web. In seven years, AWS has accumulated hundreds of thousands of customers. I saw Jassy speak on Wednesday in Boston, at venture capitalist Michael Skok’s “Startup Secrets” event series at the Harvard Innovation Lab. Category:JavaScript. Six Unique Things About Hadoop for a BI Practitioner - Blog: Wayne Eckerson. With a data lake, you simply dump all your data, both structured and unstructured, into the lake (i.e. 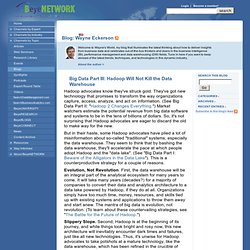 Hadoop) and then let business people "distill" their own parochial views within it using whatever technology is best suited to the task (i.e. SQL or NoSQL, disk-based or in-memory databases, MPP or SMP.) And you create enterprise views by compiling and aggregating data from multiple local views. The mantra of the data lake is think global, act local. Not bad! Fungibility. The word comes from Latin fungibilis from fungi, meaning "to perform", related to "function" and "defunct". Fungibility versus liquidity[edit] Fungibility is different from liquidity. A good is liquid if it can be easily exchanged for money or another different good. A good is fungible if one unit of the good is substantially equivalent to another unit of the same good of the same quality at the same time and place. Examples: Amazon Vine™ Program. Amazon Mechanical Turk - Welcome. Get Better Results with Less Effort with Mechanical Turk Masters! - The Mechanical Turk Blog. 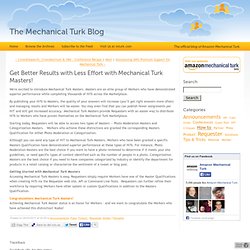 Masters are an elite group of Workers who have demonstrated superior performance while completing thousands of HITs across the Marketplace. By publishing your HITs to Masters, the quality of your answers will increase (you’ll get right answers more often) and managing results and Workers will be easier.

jQuery: The Write Less, Do More, JavaScript Library. 13 Most Popular jQuery Plugins of July 2012. Here we are at the end of another month, so it's time to get an overview of the most popular jQuery plugins from July 2012.

No matter what kind of project you are developing, some of these plugins will definitely come in handy. 1. Repo.js Repo.js is a light-weight Plugin that helps you to embed a Github repository onto your site. 18 Most Popular jQuery Plugins of August 2012. It is time we go through our monthly roundup of fresh jQuery plugins that have gained lots of buzz in the past month, Check out this list to see what you may have missed in August. 1.

jQuery Picture. Trunk8. jQuery plugin for Avgrund concept popin. Smart-time-ago by pragmaticly. Smart Time Ago is a little jQuery library to update the relative timestamps in your document intelligently. 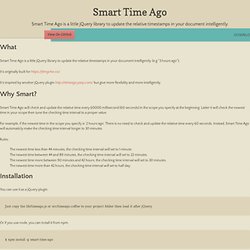 (e.g "3 hours ago"). It's originally built for It's inspired by another jQuery plugin but give more flexibility and more intelligently. Smart Time Ago will check and update the relative time every 60000 millisecond (60 seconds) in the scope you specify at the beginning. Latter it will check the newest time in your scope then tune the checking time interval to a proper value. For example, if the newest time in the scope you specify is '2 hours ago'. Rules: Free Book Collections. Amazon to Employees: Please Quit! Amazon.com (Nasdaq: AMZN ) wants its warehouse employees to ditch their jobs. 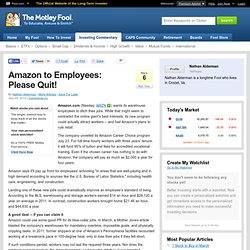 While that might seem to contradict the online giant's best interests, its new program could actually attract workers -- and fuel Amazon's plans to rule retail. The company unveiled its Amazon Career Choice program July 23.

Qat. Qat lets you search for words matching a given pattern. It is the ideal tool for the discerning setter or solver of crosswords and other word puzzles. Try it now! Qat can find individual words matching simple and compound patterns (much like grep, Word Matcher and similar tools); beyond that, it also has an ‘equation solver’ mode that can find sets of words that simultaneously satisfy given constraints. Using this feature you can, for example, find pairs of words that are single-letter (or multiple-letter) misprints of one another, words that share common segments or that differ from one another in specified ways, words containing the same segments in different orders, and much more besides. See the examples below; a more formal explanation of the pattern syntax appears at the bottom of this page. Examples In all the following examples, ‘word’ means ‘word or phrase’. Examples of ordinary patterns Examples using the equation solver. 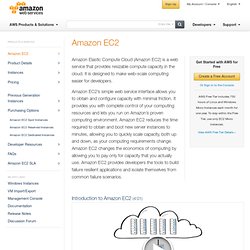 It is designed to make web-scale computing easier for developers. Amazon EC2’s simple web service interface allows you to obtain and configure capacity with minimal friction. It provides you with complete control of your computing resources and lets you run on Amazon’s proven computing environment. Amazon EC2 reduces the time required to obtain and boot new server instances to minutes, allowing you to quickly scale capacity, both up and down, as your computing requirements change. Setting Up Drupal on Ubuntu 10.10 on EC2. For several years, I've been using pretty-cheap web hosting services for my blog, my corporate website, and other webby things. 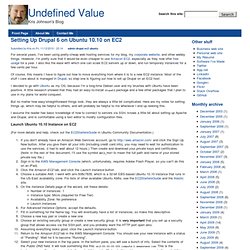 However, I'm pretty sure that it would be even cheaper to use Amazon EC2, especially as they now offer free usage for a year. I also like the ease with which one can scale EC2 servers up or down, and run temporary instances for a few cents per hour. Of course, this means I have to figure out how to move everything from where it is to a new EC2 instance. Most of the stuff I care about is managed in Drupal, so step one is figuring out how to set up Drupal on an EC2 host. MySQL Import Command [ Database Import ] How do I import data stored in a .sql file created by mysqldump command on Linux or UNIX like operating systems? 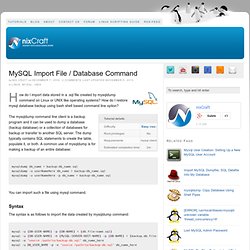 Instant SQL Formatter. Plugin for Notepad++UltraEditeclipse1.1KShare Instant SQL Formatter (Ver4.0.2 Updated: 09-19-2014) Database Output: Enter your sql code here... To create a MySQL database and set privileges to a user. MySQL is a widely spread SQL database management system mainly used on LAMP (Linux/Apache/MySQL/PHP) projects. In order to be able to use a database, one needs to create: a new database, give access permission to the database server to a database user and finally grant all right to that specific database to this user.

This tutorial will explain how to create a new database and give a user the appropriate grant permissions. For the purpose of this tutorial, I will explain how to create a database and user for the music player Amarok. How do I increase disk space for EC2. Hi there I have tested these instructions on both Windows 2003 server and Windows 2008 server As with all procedures that are going to modify data/partitions It is prudent to make sure that you have full backups including snapshots should you run into any difficulty that you can back out your changes. Steps for Resizing a Windows 2003/2008 Boot drive. [1] Identify your Windows instance in the AWS web console and write down the instance ID e.g. i-3cffee2 [2] Click on the Description tab on the lower section of the page for this instance and find the line on the left hand side marked Block Devices.

Note down the volume name of the /dev/sda1 device e.g. vol-00931469. Running Django on Windows (with performance tests) Writing your first Django app, part 1. Let’s learn by example. Throughout this tutorial, we’ll walk you through the creation of a basic poll application. Using the Google Visualization API in Django. Relational Database Service (Amazon RDS) Amazon RDS gives you online access to the capabilities of a MySQL, Oracle, Microsoft SQL Server, PostgreSQL, or Amazon Aurora relational database management system. This means that the code, applications, and tools you already use today with your existing databases can be used with Amazon RDS.

Amazon RDS automatically patches the database software and backs up your database, storing the backups for a user-defined retention period and enabling point-in-time recovery. You benefit from the flexibility of being able to scale the compute resources or storage capacity associated with your Database Instance (DB Instance) via a single API call.