How to be a Good Developer. As a PHP developer, or any kind of developer as a matter of fact, you need to constantly improve yourself in this ever-changing industry; you need to learn and use new knowledge every day. 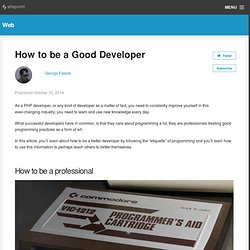 What successful developers have in common, is that they care about programming a lot, they are professionals treating good programming practices as a form of art. In this article, you’ll learn about how to be a better developer by following the “etiquette” of programming and you’ll learn how to use this information to perhaps teach others to better themselves. How to be a professional Professionalism, regardless of the job you’re working on, always starts with you.

Professionals first and foremost have strong personalities and characters. As in any area of life, programming professionals are respected. Don’t be egoistic I’ve had the chance to work in large teams since I practice this craft and the most important team dynamic I learned early on is that team and collaboration goes hand in hand. Web Apps Are the Future. Native mobile apps are a little weird, if you stop and think about them. 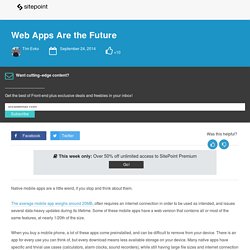 The average mobile app weighs around 20MB, often requires an internet connection in order to be used as intended, and issues several data-heavy updates during its lifetime. Some of these mobile apps have a web version that contains all or most of the same features, at nearly 1/20th of the size. When you buy a mobile phone, a lot of these apps come preinstalled, and can be difficult to remove from your device. There is an app for every use you can think of, but every download means less available storage on your device. Many native apps have specific and trivial use cases (calculators, alarm clocks, sound recorders), while still having large file sizes and internet connection requirements.

If you’re a developer, it only gets weirder. The Problem Although native mobile applications are useful and entertaining, they’re also a giant inconvenience. The Solution The solution is the browser. The 5 Best Front-End Developer Tools – mention's blog. This is a tech post by Arnaud Breton, full-stack developer here at mention with a specific focus on the front-end side and user experience. 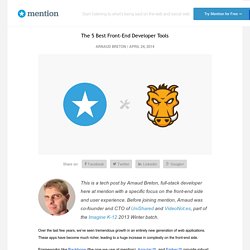 Before joining mention, Arnaud was co-founder and CTO of UniShared and VideoNot.es, part of the Imagine K-12 2013 Winter batch. Over the last few years, we’ve seen tremendous growth in an entirely new generation of web applications. These apps have become much richer, leading to a huge increase in complexity on the front-end side. Frameworks like Backbone (the one we use at mention), AngularJS, and EmberJS provide robust solutions to build amazing apps, leveraging all of the web’s power. 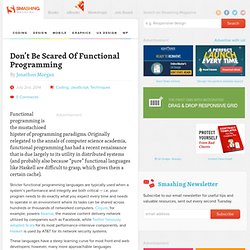 Originally relegated to the annals of computer science academia, functional programming has had a recent renaissance that is due largely to its utility in distributed systems (and probably also because “pure” functional languages like Haskell are difficult to grasp, which gives them a certain cache). Stricter functional programming languages are typically used when a system’s performance and integrity are both critical — i.e. your program needs to do exactly what you expect every time and needs to operate in an environment where its tasks can be shared across hundreds or thousands of networked computers. Clojure1, for example, powers Akamai2, the massive content delivery network utilized by companies such as Facebook, while Twitter famously adopted3 Scala4 for its most performance-intensive components, and Haskell5 is used by AT&T for its network security systems. 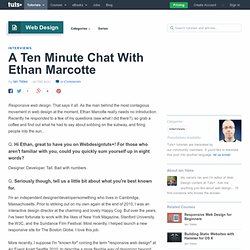 That says it all. As the man behind the most contagious movement in web design at the moment, Ethan Marcotte really needs no introduction. Recently he responded to a few of my questions (see what I did there?) , so grab a coffee and find out what he had to say about sobbing on the subway, and firing people into the sun.. Designer. I'm an independent designer/developer/something who lives in Cambridge, Massachusetts. More recently, I suppose I'm "known for" coining the term "responsive web design" at An Event Apart Seattle 2010, to describe a more flexible way of designing beyond the desktop.

In a nutshell, responsive design is an alternative way to design the post-desktop web. Anyway. Personal crusade? Hey! But really, the absolute best thing about working on the Web is that there is no One True Way™ of working. Man. Iconion : Free Icon Maker. Build Internet. Artfan Design -Web and Graphic Design, Photography, Logo, Design Inspiration and Resources, Wordpress. Welcome to Dezinerfolio. MyInkBlog - a resource for all things design. Tuts+ In this tutorial, we will cover in detail how we extracted the data, how the helper and utility methods accomplish their jobs, and how all the puzzle pieces...Improve your workflow with these helpful Gmail features. 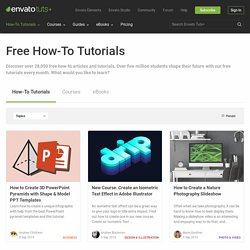 Here's a collection of some of the most interesting and best Gmail tools you may not know about.In the previous tutorial, we took a glimpse at creating CSS Shapes, allowing us to define the true shape of an element. We touched on the basics; creating a...This tutorial will focus on explaining how 2D physics joints work in Unity and how to use them to achieve great effects (without sacrificing the game...A hundred years ago in 1916, during WW1 on the battlefields of the Somme in Northern France, a revolution in armed conflict made its first appearance. This...In this tutorial I'll show you how to create a winter rural scene. First we'll build the base scene using a sky image and two landscape images. Smashing Magazine — For Professional Web Designers and Developers.