I chose this particular music hosting sites because you can actually choose from a wide range of artists and Tumblr doesn’t have limits as long as the music is hosted somewhere else. You can add as many playlists as you want and make them play auto or not. This has nothing to do with audio posts, which actually have only a 10mb limit. UPDATE: If you need to download music from Tumblr read the tutorial.

A List With The Best Tumblr Music Widgets. Hypster: Hypster has become very popular among tumblr users, due to the availability of well known artists and mainstream songs, the only thing here is that you need to be registered to create the playlist. GrooveShark: In my opinion this has to be the best Tumblr Music Widget, since it has all the features you look for: All artists, all songs, endless playlists, customizable colors and size, autplay feature, etc. Add Autoplay Background Music on Tumblr.

I know that many Tumblr users really hate the idea of a music player set on autoplay, specially those that can’t be turned off. 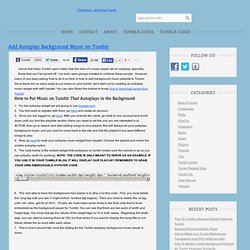 I’ve even seen groups created to unfollow these people. However, many of you keep asking how to do it so here is how to add background music playlists to Tumblr. Since there are so many ways to put music on your tumblr, we’ll start out by creating an autoplay music widget with with hypster. You can also Read this tutorial to know how to download songs from Tumblr.

How to Put Music on Tumblr That Autoplays in the Background For the autoplay widget we are going to use Hypster.comYou first need to register with them. go here and create an account.Once you are logged in, go here. The next step to have the background mp3 player is to strip a lot this code. Last but not least, read the following suggestions for inserting autoplay music on Tumblr; JSON and the Dynamic Script Tag: Easy, XML-less Web Services for JavaScript. December 21, 2005 Making requests to third-party web services from an AJAX application is a pain, but new web services that offer the option of returning JSON (JavaScript Object Notation) instead of XML can provide significant relief. 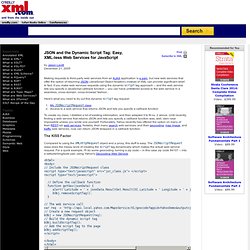 In fact, if you make web services requests using the dynamic script tag approach -- and the web service lets you specify a JavaScript callback function -- you can have unfettered access to the web service in a seamless, cross-domain, cross-browser fashion. Here's what you need to try out this dynamic script tag request: To create my class, I distilled a lot of existing information, and then adapted it to fit no. 2 above. Until recently, finding a web service that returns JSON and lets you specify a callback function was, well, darn near impossible unless you wrote one yourself.

The KISS Factor Compared to using the XMLHttpRequest object and a proxy, this stuff is easy. Figure 1. Tumblelog MP3 Widget. 20 Great Widgets to Enhance Your Tumblr Blog. While Tumblr tends to keep things minimal, sometimes you're just dying to post a widget on your site that relates to what you discuss, or maybe you just want to share something with your readers.

The 20 widgets we've gathered below are not meant to be used en masse on Tumblr blogs, but one here or there might enhance what it is you're trying to communicate to your readers. Why not share a podcast, photography, or maybe even a great work of art? With the right combination of Tumblr theme and widgets, you can maintain the platform's minimalism and bring your readers more value at the same time. What are some of your favorite widgets for Tumblr? Communication Widgets Jaxtr - Let your readers give you a call on a phone number they can't see. Meebo Me - Place a little chat box in your sidebar that allows readers to communicate with you when you are logged into Meebo, or they can leave you an offline message.