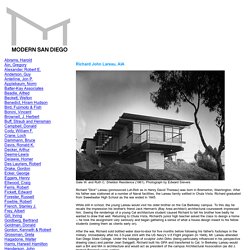 Sheldon Residence (1961). Photograph by Edward Sievers Richard "Dick" Lareau (pronounced Luh-Roh as in Henry David Thoreau) was born in Bremerton, Washington. After his father was stationed at a number of Naval facilities, the Lareau family settled in Chula Vista. While still in school, the young Lareau would visit his older brother on the Cal Berkeley campus. After the war, Richard sold bottled water door-to-door for five months before following his father's footsteps in the military. Richard Lareau left the San Francisco area returning to San Diego where he felt more opportunity would arise in a city with too few licensed architects.

Growing to a staff of 15 at its peak, the Lareau office acted as a training ground for a number of the region's architects such as Al Macy, Paul McKim, George Hartley, Bill Richards and Paul Thorke. Ruth Newman Residence (1963), Vista Photo by George Lyons Partial Project List 1957 - 1970 Henry, Fred Residence. Grant Barra. It’s in the nature of innovation that each idea is different. 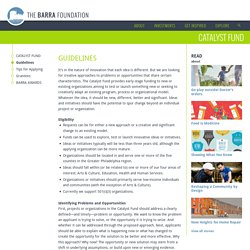 But we are looking for creative approaches to problems or opportunities that share certain characteristics. The Catalyst Fund provides early-stage funding to new or existing organizations aiming to test or launch something new or seeking to creatively adapt an existing program, process or organizational model. Whatever the idea, it should be new, different, better and significant. Ideas and initiatives should have the potential to spur change beyond an individual project or organization.

Eligibility Identifying Problems and Opportunities First, projects or organizations in the Catalyst Fund should address a clearly defined—and timely—problem or opportunity. What We Mean by Innovation. Grant Barra` Catalyst Fund Grantees Abington Art Center March 2016 $150,000/39 months Abington Arts Center has served as a traditional community arts center in Montgomery County for over 75 years. 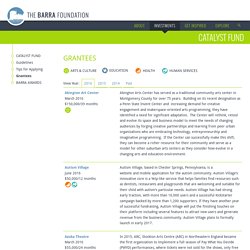 Building on its recent designation as a Penn State Invent Center and increasing demand for creative engagement and makerspace-oriented arts programming, they have identified a need for significant adaptation. The Center will rethink, retool and evolve its space and business model to meet the needs of changing audiences by forging creative partnerships and learning from peer urban organizations who are embracing technology, entrepreneurship and imaginative programming. Autism Village June 2016 $50,000/12 months Autism Village, based in Chester Springs, Pennsylvania, is a website and mobile application for the autism community. 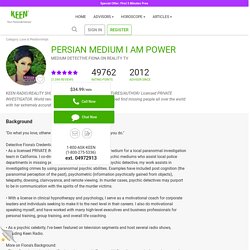 I AM the winner of several psychic shows in Europe, where I was raised! I have participated in reality shows and psychic challenges, and have been mentioned on NBC local news for my work. I provide accurate visions and predictions based on my gift and abilities and my unique use of the Pentagon technique. I AM a licensed clinical hypnotherapist, as well as a licensed private investigator. I AM an ordained minister and perform marriages.

I AM the lead medium for a local paranormal investigation team in California and co-direct a national team of psychic mediums who assist local police in missing persons and unsolved cases. I AM a private detective assisting to find missing people and assist in solving various crimes. I AM not afraid of storms for I AM learning how to sail my ship - Persian Medium I AM POWER. Persian Medium Psychic. @ Zenia, for some reason I have a feeling that she writes her own feedback lol Also the other interesting thing is the fact that her price changes constantly, I have seen 6.66 to 24.44!!! 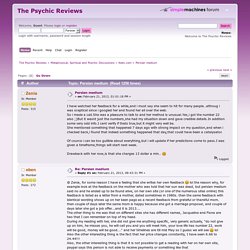