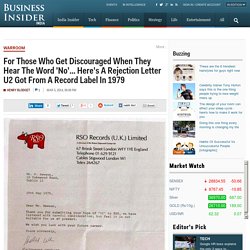 Paul Hewson (a.k.a., "Bono") the bad news... It sucks to hear the word, "no. " Even when you've gotten rejected thousands of times (as any successful person has), it's still discouraging. When you hear the word, "no" - when a proposal of yours gets rejected - it's easy to think that there might be something wrong with the proposal. So it's helpful to remember that everyone has heard the word "no. " Lots of investors passed on Facebook, Google, Twitter, et al, for example. Lots of publishers sniffed at "Harry Potter and the Philosopher's Stone" (the UK title of the original book before one brave US publisher finally bought it).

And at least one record company, it seems, rejected the early recordings of an unknown teenage Dublin band called "U2. " U2, needless to say, is one of the most successful bands in history. So have a look at this U2 rejection letter that @uberfacts just tweeted around every time you yourself get rejected. Why just capture CO2 emissions when you can turn them into cash? - SmartPla. If Joe Jones has his way, the limestone used in cement, paper and paint won’t be extracted out of the ground using explosives and heavy equipment in the future. 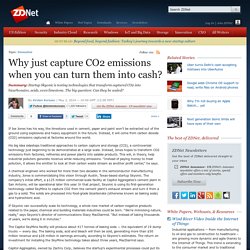 Instead, it will come from carbon dioxide (CO2) emissions captured at factories around the world. His big idea sidesteps traditional approaches to carbon capture and storage (CCS), a controversial technology just beginning to be demonstrated at a large scale. Instead, Jones hopes to transform CO2 emissions from factories, refineries and power plants into salable products. This will, in theory, help industrial polluters generate revenue while reducing emissions. "Instead of paying money to treat pollution, it allows the emitter to look at their carbon waste stream as another profit center,” he says. A chemical engineer who worked for more than two decades in the semiconductor manufacturing industry, Jones is commercializing this vision through Austin, Texas-based startup Skyonic. There are still risks, of course. The mathematician who proved why hipsters all look alike - The Washington P. Jonathan Touboul is a mathematician and a neuroscientist. 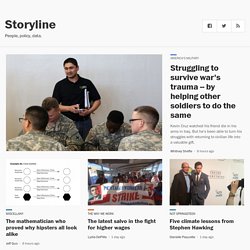 He holds a PhD in math from France’s prestigious École Polytechnique, where he won a prize for his thesis on how to simulate neurons in the brain. He publishes papers with titles like “Pulsatile localized dynamics in delayed neural-field equations in arbitrary dimension” and “The propagation of chaos in neural fields.” Recently, though, Touboul has been thinking about hipsters. Specifically, why hipsters all seem to dress alike. In his line of work, there are neurons that also behave like hipsters.

Because he is a mathematician, Touboul began to look for a way to explore this idea using equations. “In wanting to oppose the trends, there actually emerges some sort of hipster loop,” Touboul said. A day before Halloween, Touboul put a draft of his paper on the arXiv, calling it “The hipster effect: When anticonformists all look the same.” Trying to unpack one of these models can be like describing a work of Cubism: The art is lost. If losing weight has you feeling light as air, you may be on to something. 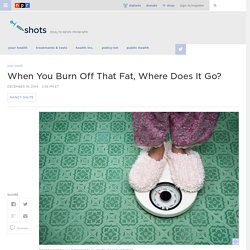 Terry Vine/Corbis hide caption itoggle caption Terry Vine/Corbis If losing weight has you feeling light as air, you may be on to something. Terry Vine/Corbis Lose weight and those pounds shuffle off, unmourned. But where does weight go when we lose it? We talk about burning off fat, and it does burn in a way, going through a complex biochemical process. That mystery was bedeviling Ruben Meerman, an Australian and former physicist turned TV personality and science educator. So he teamed up with Andrew Brown, a lipid researcher at the University of New South Wales, to figure it out. The adipose sleuths started with this chemical formula, which describes what happens when you burn a molecule of triglyceride, the predominant fat in a human body: C55H104O6+78O2 —> 55CO2+52H2O+energy.

That's based on the work of other scientists. The myth of race: Why are we divided by race when there is no such thing? This article has been updated. 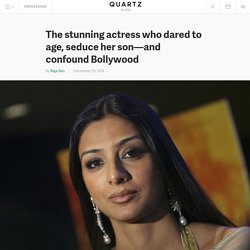 The mother smiles at her wounded son. She’s just cradled his flailing head in her arms, held on to him for dear life, held him so tight it feels the world will unravel if she doesn’t. Clutching the top of his head with her hand, she comes closer and kisses his bleeding temple. She pulls away only to come closer, caress his beard, kiss him on his cheek, intimately. Her hands drop to his shoulders as she rubs his mouth with her thumb.

She lingers devastatingly close to him, daring him to inhale her, breathe her in, but then steps down, as if about to kneel. Like a stick of raw dynamite, that scene from Haider—with that scandalous nearly-kneeling serving as the matchstick on the fuse—is by far the most sexually-charged moment in recent Indian cinema. It’s hard to feel affection toward a black widow spider who leaves bodies strung up in her wake—unless Tabu plays her. A Bollywood conundrum Childhood.