Tracking a vehicle has never been easier with just a few components and a little knowhow Back in 2010 business marketing student Yasir Afifi found a tracking device (an Orion Guardian ST820) hidden underneath his car when he went to get his oil changed. 48-hours later the FBI came to his apartment to retrieve the device, which is understandable considering how expensive they are (around $6,000). 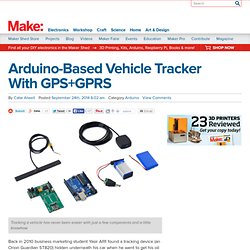 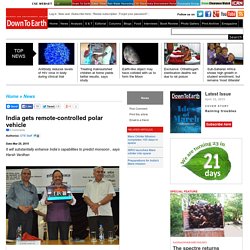 The minister inaugurated the vehicle during a visit to the National Institute of Ocean Technology (NIOT), a part of the Earth System Sciences Organization (ESSO) in Chennai on Wednesday evening, according to an official press release. The vehicle’s successful development by ESSO-NIOT signals the beginning of a process of both self-sufficiency and entry into the highly sophisticated field of Remotely Operated Vehicle (ROV) engineering which has hitherto been dominated by western powers. Insane Screwdriver-Powered EX Vehicle Rockets You Headfirst Through the Str. (Phys.org) —Today when an electric vehicle is plugged into the grid, it's almost always in charge mode, meaning it consumes power. 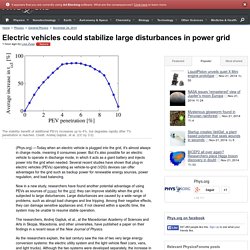 But it's also possible for an electric vehicle to operate in discharge mode, in which it acts as a giant battery and injects power into the grid when needed. Several recent studies have shown that plug-in electric vehicles (PEVs) operating as vehicle-to-grid (V2G) devices can offer advantages for the grid such as backup power for renewable energy sources, power regulation, and load balancing. Now in a new study, researchers have found another potential advantage of using PEVs as sources of power for the grid: they can improve stability when the grid is subjected to large disturbances.

Large disturbances are caused by a wide range of problems, such as abrupt load changes and line tripping. Among their negative effects, they can damage sensitive appliances and, if not cleared within a specific time, the system may be unable to resume stable operation. Tesla's new battery swap station will give electric vehicles a full charge. Last year, Tesla announced plans for a new battery swap technology that would give Model S owners the ability to replace their depleted battery with a fully charged one in less time than it takes to fill a gas tank. 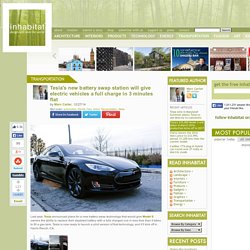 Tesla is now ready to launch a pilot version of that technology, and it’ll kick off in Harris Ranch, CA. The battery swap pilot program is intended to test the technology and see how much demand there actually is for it. Tesla says that initially, the swap will only be available by appointment and “will cost slightly less than a full tank of gasoline for a premium sedan.” The battery swap will take about three minutes to complete, since more time is needed to remove the titanium and hardened aluminum ballistic plates that now shield the battery pack. The Search for a Better Electric Vehicle Battery is Making Progress - Solar. This article was written for Berkeley Lab by Lynn Yarris Lithium (Li)-ion batteries serve us well, powering our laptops, tablets, cell phones and a host of other gadgets and devices. 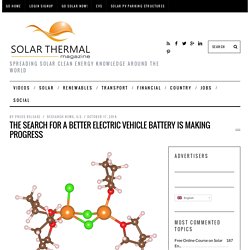 However, for future automotive applications, we will need rechargeable batteries with significant increases in energy density, reductions in cost and improvements in safety. Hence the big push in the battery industry to develop an alternative to the Li-ion technology. The Remarkable Plunge in the Cost of Electric Vehicles. Electric cars may seem like a niche product that only wealthy people can afford, but a new analysis suggests that they may be close to competing with or even beating gas cars on cost. 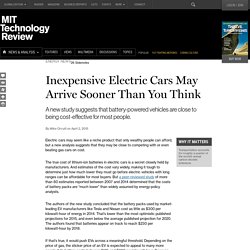 The true cost of lithium-ion batteries in electric cars is a secret closely held by manufacturers. And estimates of the cost vary widely, making it tough to determine just how much lower they must go before electric vehicles with long ranges can be affordable for most buyers. But a peer-reviewed study of more than 80 estimates reported between 2007 and 2014 determined that the costs of battery packs are “much lower” than widely assumed by energy-policy analysts. The authors of the new study concluded that the battery packs used by market-leading EV manufacturers like Tesla and Nissan cost as little as $300 per kilowatt-hour of energy in 2014.

That’s lower than the most optimistic published projections for 2015, and even below the average published projection for 2020. Electric Vehicle Business ( Solar Thermal Magazine) The electric vehicle business will approach a massive $500 billion in 2025 with the traction motors being over $25 billion. 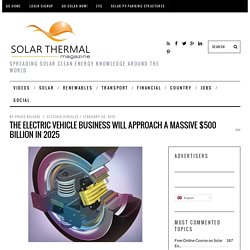 Their design, location and integration is changing rapidly. Traction motors propelling land, water and air vehicles along can consist of one inboard motor or – an increasing trend – more than one near the wheels, in the wheels, in the transmission or ganged to get extra power. Integrating is increasing with an increasing number of motor manufacturers making motors with integral controls and sometimes integral gearing.

Alternatively they may sell motors to the vehicle manufacturers or to those integrating them into transmission. Today, with the interest in new traction motor design there is a surge in R&D activities in this area, much of it directed at specific needs such as electric aircraft needing superlative reliability and power to weight ratio.