9 Apps Draining Your Phone's Battery. Whether you're an Android or an iPhone user, odds are you have a gripe or two about your phone's battery life. It's the number one complaint among cell phone users, and unfortunately, there haven't been many breakthroughs in cell battery tech. As apps continue to get more sophisticated, they're also sucking more of the life out of your phone's battery.

Almost all smartphone users download apps, which explains why we're all familiar with the agony of being down to 10% battery by 5 p.m. We're not suggesting you should give up your Twitter or Google Maps apps, but learning which of your apps are the most battery draining can help you make smarter decisions using your smartphone. Many of the estimated 50 million lithium-ion laptop batteries discarded every year could provide electricity storage sufficient to light homes in poor countries, researchers at IBM say. 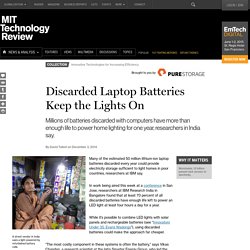 In work being aired this week at a conference in San Jose, researchers at IBM Research India in Bangalore found that at least 70 percent of all discarded batteries have enough life left to power an LED light at least four hours a day for a year. While it’s possible to combine LED lights with solar panels and rechargeable batteries (see “Innovators Under 35: Evans Wadongo”), using discarded batteries could make the approach far cheaper. “The most costly component in these systems is often the battery,” says Vikas Chandan, a research scientist at the lab’s Smarter Energy Group, who led the project. “In this case, the most expensive part of your storage solution is coming from trash.” IBM is not considering this as a business but says the technology could be offered free to poor countries. 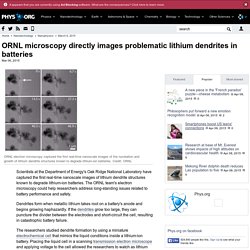 The ORNL team's electron microscopy could help researchers address long-standing issues related to battery performance and safety. Dendrites form when metallic lithium takes root on a battery's anode and begins growing haphazardly. If the dendrites grow too large, they can puncture the divider between the electrodes and short-circuit the cell, resulting in catastrophic battery failure.

Now On Sale: The First AA Batteries Made Out Of Old Batteries. Every time I get rid of used batteries, I have a tinge of guilt. 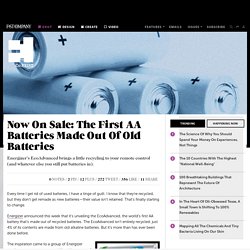 I know that they're recycled, but they don't get remade as new batteries—their value isn't retained. That's finally starting to change. Na-Ion batteries. (Phys.org)—As lithium resources continue to decline worldwide, the next generation of portable electronics will most likely be powered by something other than Li-ion batteries. 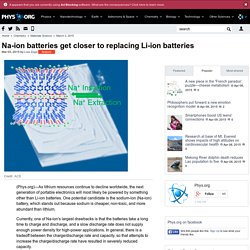 One potential candidate is the sodium-ion (Na-ion) battery, which stands out because sodium is cheaper, non-toxic, and more abundant than lithium. Currently, one of Na-ion's largest drawbacks is that the batteries take a long time to charge and discharge, and a slow discharge rate does not supply enough power density for high-power applications. In general, there is a tradeoff between the charge/discharge rate and capacity, so that attempts to increase the charge/discharge rate have resulted in severely reduced capacity. Now in a new study published in the Journal of the American Chemical Society, researchers led by Yong Lei, a professor at the Technical University of Ilmenau in Germany, have achieved a significant improvement in this area. Polar Umbrella: Ice Sheet Regenerating Skyscraper Wins the 2013 eVolo Skysc.

The Polar Umbrella super-structure is a buoyant skyscraper designed to rebuild the shrinking polar ice sheets affected by global warming. 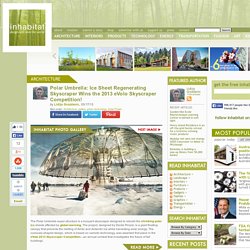 The project, designed by Derek Pirozzi, is a giant floating canopy that prevents the melting of Arctic and Antarctic ice while harvesting solar energy. The curiously-shaped design, which is based on osmotic technology, was awarded first place in the eVolo 2013 Skyscraper Competition—an annual contest that investigates the future of tall buildings. Research shows that the polar ice caps have melted faster in last 20 years than in the last 10,000.

Polar regions have experienced dramatic melting trends which are responsible for a fifth of the global sea level rise since 1992. Pirozzi’s Polar Umbrella seeks to address these issues and offer a solution that reverses the harmful consequences of global warming. With wildlife habitats, housing units and eco-tourist attractions, the proposal is a self-sufficient metropolis. . + Derek Pirozzi. Half-millimeter-thick battery could be worn in a wrinkle-smoothing patch. (TechXplore)—As the batteries under development in today's research labs are looking less like large blocks of metal and more like pieces of plastic wrap, their novel applications are coming closer to reality. 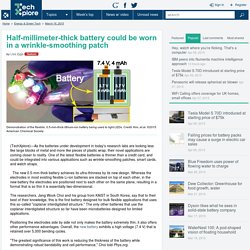 One of the latest flexible batteries is thinner than a credit card, and could be integrated into various applications such as wrinkle-smoothing patches, smart cards, and watch straps. The new 0.5-mm-thick battery achieves its ultra-thinness by its new design.