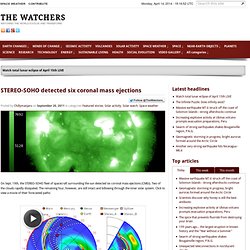 Two of the clouds rapidly dissipated. The remaining four, however, are still intact and billowing through the inner solar system. Strong Geomagnetic Storm in Progress - strong compression of Earth's magnetosphere. Are You Ready? Mayan Secrets to Be Revealed by Mexican Government in '2012' Doc. 2012 News and recent Information must watch. Sun storms 'could be more disruptive within decades' 18 August 2011Last updated at 20:11 By Judith Burns Science reporter, BBC News Solar storms may be more powerful at times of middling solar activity Within decades, solar storms are likely to become more disruptive to planes and spacecraft, say researchers at Reading University. 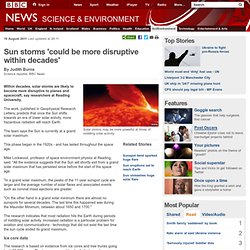 The work, published in Geophysical Research Letters, predicts that once the Sun shifts towards an era of lower solar activity, more hazardous radiation will reach Earth. The team says the Sun is currently at a grand solar maximum. This phase began in the 1920s - and has lasted throughout the space age. Mike Lockwood, professor of space environment physics at Reading, said: "All the evidence suggests that the Sun will shortly exit from a grand solar maximum that has persisted since before the start of the space age. "In a grand solar maximum, the peaks of the 11-year sunspot cycle are larger and the average number of solar flares and associated events such as coronal mass ejections are greater. 2011-THE POLE SHIFT IS REALLY HAPPENING NOW! Main Stream Media AGREES. Vijf vragen over de Bilderbergconferentie. De Nederlandse Publieke Omroep maakt gebruik van cookies. 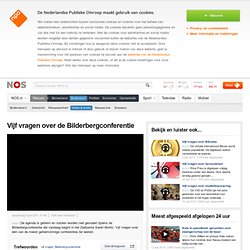 CNN Nasa 2012 Bullshit!/ TIMES UP!!!!! Part 2. The Ultimate Lies. Astronomers find evidence of 'cosmic climate change' A team of astronomers has found evidence that the universe may have gone through a warming trend early in its history. 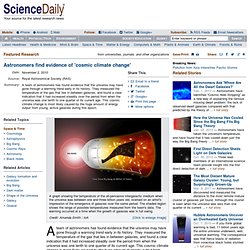 They measured the temperature of the gas that lies in between galaxies, and found a clear indication that it had increased steadily over the period from when the universe was one tenth to one quarter of its current age. This cosmic climate change is most likely caused by the huge amount of energy output from young, active galaxies during this epoch. The researchers publish their results in a forthcoming paper in the journal Monthly Notices of the Royal Astronomical Society. "Early in the history of the universe, the vast majority of matter was not in stars or galaxies," University of Cambridge astronomer George Becker explains. "Instead, it was spread out in a very thin gas that filled up all of space. " The quasar light the astronomers were studying was more than ten billion years old by the time it reached Earth, and had travelled through vast tracts of the universe.

How Can We Cope in a World of Rapid Change? > The Good News: July/August 2010. Do you feel bombarded with change from every direction? 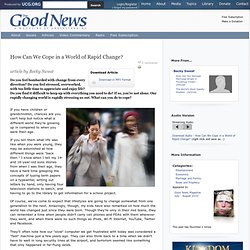 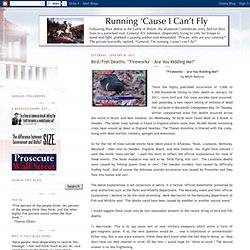 " by Mitch Battros "Since the highly published occurrence of 3,000 to 5,000 blackbirds falling to their death on January 1st 2011, more bird and fish mass suicides have occurred. Just yesterday, a new report telling of millions of dead fish surfaced in Maryland's Chesapeake Bay. On Tuesday, similar unexplained mass fish deaths occurred across the world in Brazil and New Zealand. On Wednesday, 50 birds were found dead on a street in Sweden. So far the list of mass suicide events have taken place in Arkansas, Texas, Louisiana, Kentucky, Maryland - then onto to Sweden, England, Brazil, and New Zealand. The above explanations is not conjecture or satire, it is factual "official statements" presented by area authorities such as the Parks and Wildlife Department. 2012: Leaks Found in Earth's Magnetic Field. 2012, Planet "X" - Michio Kaku on End of Days & Water on the Moon. Michio Kaku's warning for 2012. Terence Mckenna: 2012 Timewave Zero TV Show Sightings.

Earth Changes Media - for the latest info on our changing earth. NASA: A Giant Breach in Earth's Magnetic Field. Did fireworks scare thousands of birds to death? - CTV News. Wildlife experts say New Year's Eve fireworks probably scared thousands of blackbirds, sending them into a frenzy, causing them to drop dead from the sky onto a small Arkansas town. 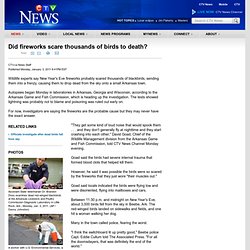 Autopsies began Monday in laboratories in Arkansas, Georgia and Wisconsin, according to the Arkansas Game and Fish Commission, which is heading up the investigation. The tests showed lightning was probably not to blame and poisoning was ruled out early on. For now, investigators are saying the fireworks are the probable cause but they may never have the exact answer. "They get some kind of loud noise that would spook them . . . and they don't generally fly at nighttime and they start crashing into each other," David Goad, Chief of the Wildlife Management division from the Arkansas Game and Fish Commission, told CTV News Channel Monday evening.