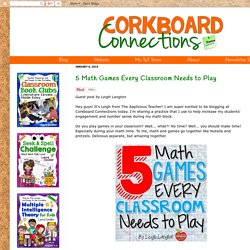 It's Leigh from The Applicious Teacher! I am super excited to be blogging at Corkboard Connections today. I'm sharing a practice that I use to help increase my students' engagement and number sense during my math block. Do you play games in your classroom? Wait... what?! As a third grade teacher, I know how limited our time can be, so I am here to share with you 5 math games you should take the time to play this year! This game can be played in a k-5 classroom. Here's how to play... The idea is simple, but can be modified for your students. Other Variations Students sit down on a certain multiples (like the multiples of 7) Students don't say the multiple. This paper and pencil game works well in second to fifth grade classrooms and can be played by teams of students (like boys against girls) or in pairs.

Shari Sloane - Educational Consultant. Math Centers and Games (Click on any image to see a larger version of that image.) 10s Go Fish - This game is played just like "Go Fish. 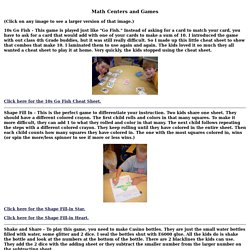 " Instead of asking for a card to match your card, you have to ask for a card that would add with one of your cards to make a sum of 10. I introduced the game with out class 4th Grade buddies, but it was still really difficult. So I made up this little cheat sheet to show that combos that make 10. Click here for the 10s Go Fish Cheat Sheet. Math Game: Target Number. July 15, 2014 This game is from Mr. 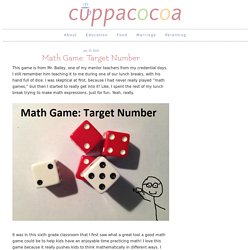 Bailey, one of my mentor teachers from my credential days. I still remember him teaching it to me during one of our lunch breaks, with his hand full of dice. I was skeptical at first, because I had never really played “math games,” but then I started to really get into it! Like, I spent the rest of my lunch break trying to make math expressions. It was in this sixth grade classroom that I first saw what a great tool a good math game could be to help kids have an enjoyable time practicing math!

A quick refresher on PEMDAS: First, do portions in Parentheses.Next, work out any Exponents.Next, do all Multiplication and Division problems from left to right. This game would work well for your fourth grader who can use parentheses, multiplication, division, addition, and subtraction to play. Seesaw Logic - PrimaryGames Mobile: Free Mobile Games. 40+ Resources for Dice and Everything Dice... Öva matte på Nomp. Studyzone.tv - Maths Games, Video Lessons and Worksheets. Mathwire.com. Paper Math Games: Fractions and Multiplication. 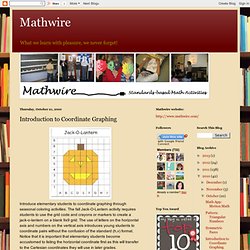 The fall Jack-O-Lantern activity requires students to use the grid code and crayons or markers to create a jack-o-lantern on a blank 9x9 grid. The use of letters on the horizontal axis and numbers on the vertical axis introduces young students to coordinate pairs without the confusion of the standard (h,v) format. Notice that it is important that elementary students become accustomed to listing the horizontal coordinate first as this will transfer to the Cartesian coordinates they will use in later grades. Download the Mathwire Jack-o-Lantern graphing activity. Download the Mathwire Mad Monster graphing activity. Guess My Rule Game. This function machine game was created to give students practice in saying and writing the rule, given an input/output table. 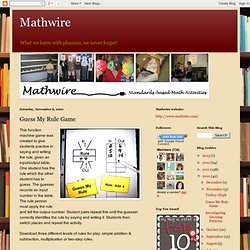 One student has the rule which the other student has to guess. The guesser records an input number in the table. The rule person must apply the rule and tell the output number. Student pairs repeat this until the guesser correctly identifies the rule by saying and writing it. Students then switch places and repeat the activity. Download three different levels of rules for play: simple addition & subtraction, multiplication or two-step rules. Download directions and cards for the Guess My Rule game.Download a function machine template designed to be inserted into a clear sheet protector and used with dry erase markers for easy game play.Differentiation: This game is easily differentiated by varying the rule cards provided to students. Matematik spel. Spel som lär dig siffror och att räkna. 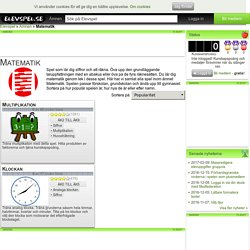