OGRIN Home. The Dutch Ban Roundup, France and Brazil to Soon Follow. The dominoes are starting to fall. 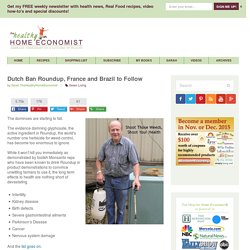 The evidence damning glyphosate, the active ingredient in Roundup, the world’s number one herbicide for weed control, has become too enormous to ignore. While it won’t kill you immediately as demonstrated by foolish Monsanto reps who have been known to drink Roundup in product demonstrations to convince unwitting farmers to use it, the long term effects to health are nothing short of devastating. InfertilityKidney diseaseBirth defectsSevere gastrointestinal ailmentsParkinson’s DiseaseCancerNervous system damage And the list goes on. Finally, governments around the world are starting to take action, with the Dutch Parliament in recent days voting to ban all glyphosate-based herbicides including Roundup, from the end of 2015 and beyond.

Esther Ouwehand, Dutch Parliament member who introduced the successful motion to ban the deadly herbicide for private use, had this to say: France Poised to Ban Roundup and Follow Netherlands’ Lead Need a Nontoxic Weedkiller? Roundup: Quick Death for Weeds, Slow Death for You - The Healthy Home Economist. You’ve seen the commercials. 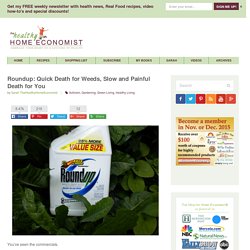 All American Dad, pump sprayer in hand, attacking those pesky weeds growing in the cracks of his family’s driveway with a vengeance. He chooses Roundup, of course. Why? Because Roundup kills weeds to the root so they won’t come back making you the laughingstock of your suburban neighborhood. Roundup, Roundup everywhere. Roundup is indisputably the King of Herbicides and one of Monsanto’s most lucrative crown jewels.

The trouble is, while Roundup is highly effective at killing weeds, it’s also proving highly effective at killing us too – slowly but surely and insidiously – via Roundup’s deadly active ingredient – glyphosate. While the pesticide industry maintains that glyphosate is minimally toxic to humans, new research published in the Journal Entropy strongly argues otherwise by shedding light on exactly how glyphosate disrupts mammalian physiology. Glyphosate’s Suppression of Cytochrome P450 Enzymes and Amino Acid Biosynthesis by the Gut Microbiome: Pathways to Modern Diseases. 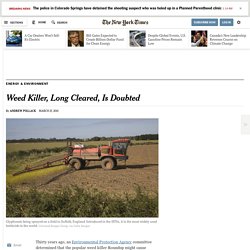 Six years later, in 1991, the agency reversed itself after re-evaluating the mouse study that had been the basis for the original conclusion. Now the issue is back again, in an even bigger way. An agency of the World Health Organization has declared that glyphosate, the active ingredient in Roundup, “probably” causes in people. One piece of evidence the agency cites is that same mouse study. The declaration drew an angry response from Monsanto, the maker of Roundup, which has accused the agency of having an “agenda” and “cherry picking” the data to support its case.

The conclusion is “starkly at odds with every credible scientific body that has examined glyphosate safety,” Philip Miller, ’s vice president for global regulatory affairs, told reporters on Tuesday. Over all, the agency has reviewed 983 things like chemicals and occupations. Kathryn Z. WHO Declares that Glyphosate Herbicides Probably Cause Cancer - Progressive Radio Network. The World Health Organisation’s cancer agency has declared the world’s most widely used weedkiller – glyphosate – a “probable human carcinogen” in a move that will alarm the agrochemical industry and amateur gardeners. 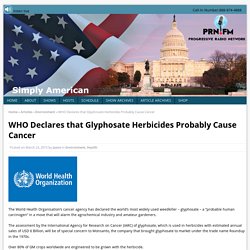 The assessment by the International Agency for Research on Cancer (IARC) of glyphosate, which is used in herbicides with estimated annual sales of USD 6 Billion, will be of special concern to Monsanto, the company that brought glyphosate to market under the trade name Roundup in the 1970s. Over 80% of GM crops worldwide are engineered to be grown with the herbicide. The IARC has no regulatory role and its decisions do not automatically lead to bans or restrictions, but campaigners are expected to use them to put pressure on regulators. Potassium Bromate: Bread Conditioner and Cancer, Banned in UK Not US. Whole Foods does not sell products containing potassium bromate. 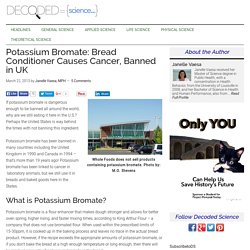 Photo by: M.O. Stevens If potassium bromate is dangerous enough to be banned all around the world, why are we still eating it here in the U.S.? Perhaps the United States is way behind the times with not banning this ingredient. Potassium bromate has been banned in many countries including the United Kingdom in 1990 and Canada in 1994 – that’s more than 19 years ago! What is Potassium Bromate? Potassium bromate is a flour enhancer that makes dough stronger and allows for better oven spring, higher rising, and faster mixing times, according to King Arthur Flour – a company that does not use bromated flour.

Cancer in Your Bread? Countries around the world have banned potassium bromate because researchers have found that it causes cancer in rats. Avoiding Potassium Bromate. Most U.S. Apples Are Coated With A Chemical Banned In Europe. A chemical widely used on nonorganic American apples was banned in the European Union in 2012 because its makers could not show it did not pose a risk to human health, according to a new analysis by Environmental Working Group. 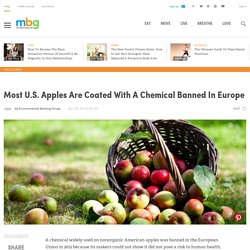 In the U.S., as few Americans may realize, after harvest, farmers and packers drench most conventionally-raised apples with diphenylamine, known as DPA, which helps prevent “storage scald,” blackening or browning of fruit skin during long months of cold storage. DPA was first registered for use in the U.S. in 1962. Tests of raw apples conducted by U.S. Department of Agriculture scientists in 2010, the most recent year for which data are available, found DPA on 80 percent of the apples tested. “While it is not yet clear that DPA is risky to public health, European Commission officials asked questions that the chemicals’ makers could not answer,” said EWG senior scientist Sonya Lunder.