Aruza’s Home Protection Plan combines some of the most innovative, Eco-friendly pest management methods to rid your home of pests for good. Our service is designed to amaze you—and with our money back guarantee, you won’t have to worry about pests again. 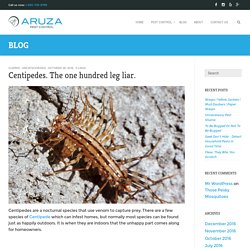 There are a few species of Centipede which can infest homes, but normally most species can be found just as happily outdoors. It is when they are indoors that the unhappy part comes along for homeowners. In the South the most common centipede pest species is that of the house centipede. The most apt description is that of a many legged beast, which is lighting fast , and looks like it emerged from the ninth circle of Hades. The house centipede moves fast when it needs to, and is a record holder in speed for it’s size. Here is the good news. Most centipede species you may encounter in your home are generally too small for their pincers to pierce human skin and inject venom. Woe is the Foe Bitten. Black Widow Spider. 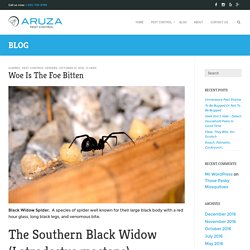 A species of spider well known for their large black body with a red hour glass, long black legs, and venomous bite. The Southern Black Widow (Latrodectus mactans) The Black Widow Spider has a neurotoxin called Latrotoxin which they use on prey for hunting, defense, and mating purposes (feel sorry for the spider fellas). The male Black Widow is generally too small to inject enough of the neurotoxin into humans.

The female however is the one responsible for the bites dangerous to humans, although most Black Widow bites reported are generally non -fatal to humans. Black Widow species are notorious for placing there webs in the corners of garages near the door as well as around the exterior of houses low to the ground. The Black Widow Spider Is No Joke Black Widows are a serious and dangerous household pest. About - Aruza Pest Control. How to Choose a Pest Control Company – Family, Home & Health. I’ve heard about so many pest control disasters lately that I decided to find out more about this issue and get to an effective tutorial on it. 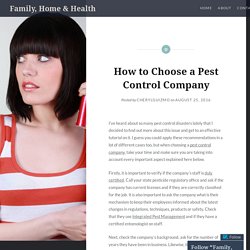 I guess you could apply these recommendations in a lot of different cases too, but when choosing a pest control company, take your time and make sure you are taking into account every important aspect explained here below. Firstly, it is important to verify if the company’s staff is duly certified. Call your state pesticide regulatory office and ask if the company has current licenses and if they are correctly classified for the job. It is also important to ask the company what is their mechanism to keep their employees informed about the latest changes in regulations, techniques, products or safety.

Check that they use Integrated Pest Management and if they have a certified entomologist on staff. Next, check the company’s background, ask for the number of years they have been in business. Like this: Like Loading... Diseases Directly Transmitted By Rodents. IDENTIFY PESTS: Pest Library. Mice are not nice! – Family, Home & Health. Yes, I know. 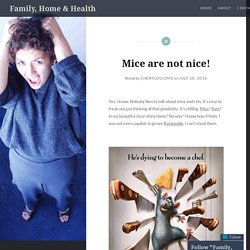 Nobody likes to talk about mice and rats. It’s easy to freak out just thinking of that possibility. It’s chilling. Mice? Rats? How to Tell if I Have Mice or Rats at Home? For this mission, you need to be a great observer. Your pets look upset: Your cats and dogs get stirred up if they hear and smell any rodents at home, which for them is their territory. Those Pesky Mosquitoes - Aruza Pest Control. Aedes aegypti. 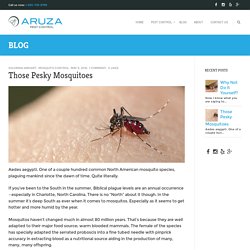 One of a couple hundred common North American mosquito species, plaguing mankind since the dawn of time. Quite literally. If you’ve been to the South in the summer, Biblical plague levels are an annual occurrence—especially in Charlotte, North Carolina. There is no “North” about it though. In the summer it’s deep South as ever when it comes to mosquitos. Mosquitos haven’t changed much in almost 80 million years. Why change when the means of your food source will always have warm blood coursing just underneath the skin?

Mosquitos use carbon dioxide, heat and odor when locating a prey. Carbon dioxide is emitted when exhaling, heat is radiated from the body from various functions which keep you alive and blood pumping, and to be frank you can’t stop having an odor. This wouldn’t be too bad in retrospect if you had to deal with maybe one mosquito. The best treatment as they say is prevention. Why Not Do It Yourself? - Aruza Pest Control. Now I know what you are saying to yourself “Why don’t I just buy some bug spray at my local store?” 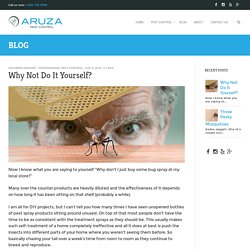 Many over the counter products are heavily diluted and the effectiveness of it depends on how long it has been sitting on that shelf (probably a while). I am all for DIY projects, but I can’t tell you how many times I have seen unopened bottles of pest spray products sitting around unused. On top of that most people don’t have the time to be as consistent with the treatment sprays as they should be. This usually makes such self-treatment of a home completely ineffective and all it does at best is push the insects into different parts of your home where you weren’t seeing them before.