Angular Directive To Create Ripple Effect - Angular Script. Advanced Angular Forms with angular-formly - Video Tutorial Playlist @eggheadio. AngularJS Fundamentals - Video Tutorial Series @eggheadio. AngularJS is an incredibly powerful framework but sometimes it can be confusing and frustrating trying to figure out how all of these amazing features actually fit together. 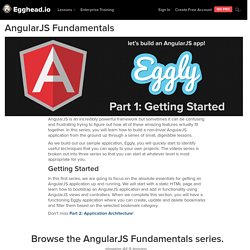 In this series, you will learn how to build a non-trivial AngularJS application from the ground up through a series of small, digestible lessons. As we build out our sample application, Eggly, you will quickly start to identify useful techniques that you can apply to your own projects. The videos series is broken out into three series so that you can start at whatever level is most appropriate for you. Getting Started In this first series, we are going to focus on the absolute essentials for getting an AngularJS application up and running. Don't miss Part 2: Application Architecture! Angular. Promises in AngularJS, Explained as a Cartoon. One morning, a father says to his son: "Go and get the weather forecast, son! 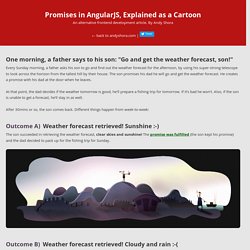 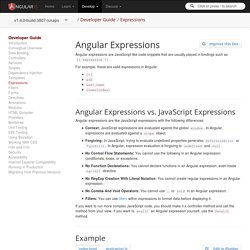 Angular expressions are JavaScript-like code snippets that are usually placed in bindings such as {{ expression }}. For example, these are valid expressions in Angular: Introduction to AngularJS. AngularJS: Developer Guide: Expressions. Testing Overview - AngularJS Video Tutorial #free @eggheadio. John Lindquist: Before I go any further, I really need to introduce the concept of testing. 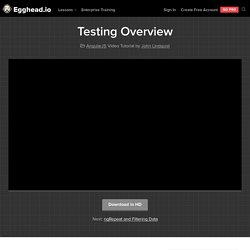 We're going to test our filter to make sure that it works. This is going to be the only video on testing. It's going to be a broad overview of what you should generally do. It's necessary, because when you start writing things like filters, you need to have absolute confidence that they're doing what you expect them to do, not just that they're magically working. Let's delete our filter. We're going to describe a test suite of what our filters should do. Our reverse filter should reverse a string. That's a full test there saying that we should have a reverse filter, and it should take a string of a, b, c, d, and then to reverse it to d, c, b, a. Failing in unit test tests is actually a good thing, because it gives you the next step of what you need to do.

Create out reverse filter here. We headed back nothing, and it wanted, d, c, b, a. Let's actually fulfill the requirements here. How to master AngularJS? - Stack Overflow. Soup to Bits: Shaping Up With Angular.js - Code School. Shaping up with Angular.js. AngularJS Tutorial: Learn to Build Modern Web Apps with MEAN - Thinkster. The goal of this tutorial is to guide you through the creation of a Reddit/Hacker News clone using the MEAN stack. 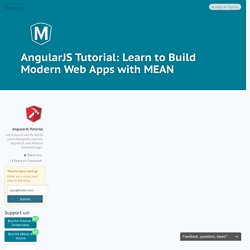 By completing this tutorial, you will gain a basic understanding of the MEAN stack including building a REST interface with Express.js on top of Node.js and using that interface to perform CRUD operations on a database via an AngularJS frontend. Why MEAN Stack? The acronym "MEAN" stands for "MongoDB Express.js AngularJS Node.js" and represents a group of technologies which are known to synergize well together. The major benefit of the MEAN stack is that it's extremely quick to prototype with. Node.js allows you to use Javascript on the backend as well as the frontend which can save you from having to learn a separate language. Prerequisites This course assumes knowledge of programming and at least basic knowledge of JavaScript. Recommendations for Completing this Tutorial Throughout the course of this tutorial, links to additional concepts and information will be included. A Better Way to Learn AngularJS - Thinkster. Congratulations on taking the plunge! 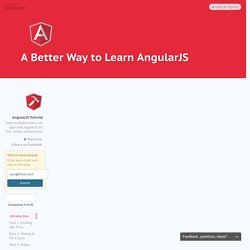 This AngularJS course is built with the intent of exposing you to the best available resources on each Angular topic. Our desire is to present these topics richly, and from a variety of vantage points, in order to afford you a more complete perspective on them. This course is accompanied by AngularJS Tutorial: Learn to Build Modern Web Apps with MEAN. The learning curve of AngularJS can be described as a hockey stick. Getting started with apps featuring basic functionality is delightfully easy. With AngularJS, the "Ready, Fire, Aim" learning methodology of duct taping together a handful of tutorials and a cursory glance through the documentation will lead to confusion and frustration.

Prerequisites Resources Since AngularJS is still in its infancy relative to other JavaScript frameworks, the number of encyclopaedic resources on it is still insufficient.