Edward Snowden Interview. Edward Snowden: The Untold Story. The afternoon of our third meeting, about two weeks after our first, Snowden comes to my hotel room. 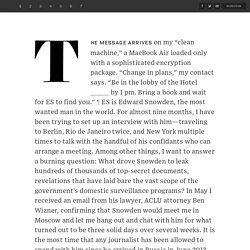 I have changed locations and am now staying at the Hotel National, across the street from the Kremlin and Red Square. An icon like the Metropol, much of Russia’s history passed through its front doors at one time or another. Lenin once lived in Room 107, and the ghost of Felix Dzerzhinsky, the feared chief of the old Soviet secret police who also lived here, still haunts the hallways.

But rather than the Russian secret police, it’s his old employers, the CIA and the NSA, that Snowden most fears. “If somebody’s really watching me, they’ve got a team of guys whose job is just to hack me,” he says. More than anything, Snowden fears a blunder that will destroy all the progress toward reforms for which he has sacrificed so much. Indeed, some of his fellow travelers have already committed some egregious mistakes. Nor is he optimistic that the next election will bring any meaningful reform. Edward Snowden - Biography - Computer Programmer. Edward Snowden is a former National Security Agency subcontractor who made headlines in 2013 when he leaked top secret information about NSA surveillance activities. 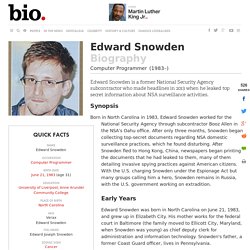 Synopsis Born in North Carolina in 1983, Edward Snowden worked for the National Security Agency through subcontractor Booz Allen in the NSA's Oahu office. After only three months, Snowden began collecting top-secret documents regarding NSA domestic surveillance practices, which he found disturbing. After Snowden fled to Hong Kong, China, newspapers began printing the documents that he had leaked to them, many of them detailing invasive spying practices against American citizens. With the U.S. charging Snowden under the Espionage Act but many groups calling him a hero, Snowden remains in Russia, with the U.S. government working on extradition. Early Years Edward Snowden was born in North Carolina on June 21, 1983, and grew up in Elizabeth City. Government Work Blowing the Whistle Aftermath. Edward Snowden.

In 2013, Snowden was hired by an NSA contractor, Booz Allen Hamilton, after previous employment with Dell and the CIA.[4] On May 20, 2013, Snowden flew to Hong Kong after leaving his job at an NSA facility in Hawaii and in early June he revealed thousands of classified NSA documents to journalists Glenn Greenwald, Laura Poitras and Ewen MacAskill. 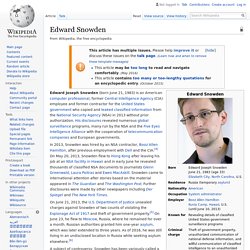 Snowden came to international attention after stories based on the material appeared in The Guardian and The Washington Post. Further disclosures were made by other newspapers including Der Spiegel and The New York Times. On June 21, 2013, the U.S. Department of Justice unsealed charges against Snowden of two counts of violating the Espionage Act of 1917 and theft of government property.[5] On June 23, he flew to Moscow, Russia, where he remained for over a month. Russian authorities granted him one-year asylum, which was later extended to three years. Background Childhood, family, and education Political views Career Employment at CIA Publication. Libertarians Will Never Be Successful Because EDWARD SNOWDEN! Writing at The New York Post, William McGurn slams libertarian politicians and various unnamed folks at Reason (Hi, Mom!) 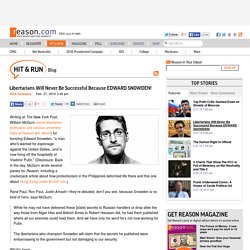 For lionizing Edward Snowden, "a man who's wanted for espionage against the United States...and is now living off the hospitality of Vladimir Putin. " (Disclosure: Back in the day, McGurn wrote several pieces for Reason, including a crackerjack article about how protectionism in the Philippines deformed life there and this one about Hong Kong under British rule.) Rand Paul, Ron Paul, Justin Amash—they're deluded, don't you see, because Snowden is no kind of hero, says McGurn: While he may not have delivered these [state] secrets to Russian handlers or drop sites the way those from Alger Hiss and Aldrich Ames to Robert Hanssen did, he had them published where all our enemies could read them. What's more: Say you oppose the NSA program and believe it a good thing it was exposed.