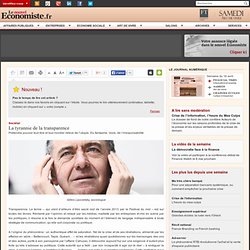 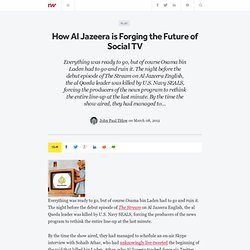 The night before the debut episode of The Stream on Al Jazeera English, the al Qaeda leader was killed by U.S. Navy SEALS, forcing the producers of the news program to rethink the entire line-up at the last minute. By the time the show aired, they had managed to schedule an on-air Skype interview with Sohaib Athar, who had unknowingly live-tweeted the beginning of the raid that killed bin Laden. Athar, who Al Jazeera tracked down via Twitter, gave his first on-screen interview on The Stream that Monday.

Athar fielded questions not only from the show's host, but from users across the globe via Twitter. So how did this scrappy upstart show land such an important source before CNN, BBC and other mainstream broadcast outlets? From Tweets to Hangouts, a Thoroughly Social Production. Step-by-Step Guide to your Social Media Success. London 2012: Social media restriction for Games Makers. 5 January 2012Last updated at 14:57 By Claire Heald BBC 2012 No behind the scenes posts or pictures from volunteers Olympic organisers have set out social media rules for the 70,000 Games Maker volunteers, including a ban on pictures or posts featuring backstage VIPs. 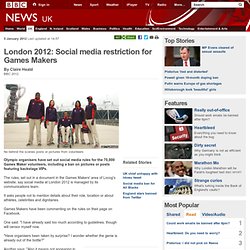 The rules, set out in a document in the Games Makers' area of Locog's website, say social media at London 2012 is managed by its communications team. It asks people not to mention details about their role, location or about athletes, celebrities and dignitaries. List of Social Media Management Systems (SMMS) Pain: Social Media Teams Are Challenged To Respond To the Distributed Conversations I’m starting to get a few briefings and requests from strategists LaSandra Brill, about new technologies that enable social marketers to quickly manage, maintain, and conduct reporting on multiple channels. 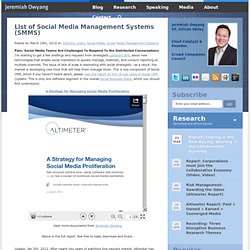 The issue of lack of scale is resonating with social strategists –as a result, the market is developing new tools that will help them manage them. This is one component of Social CRM, which if you haven’t heard about, please read the report on the 18 use cases of Social CRM. (Update: This is only one software segment in the overall Social Business Stack, which you should first understand) Above is the full report, feel free to read, download and share. Update: Jan 5th, 2012. BuddyPress.org.

Social Consulting Services. 2011. 2012. Case Studies. Platforms. Strategy. How To Build an Online Community - Kristen Taylor - Technology - The ... Editor's note: If you're launching a website or app today, you need to build a community around your content. 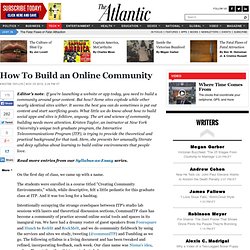 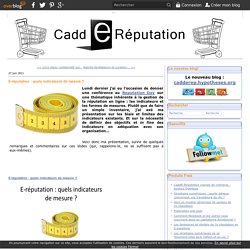 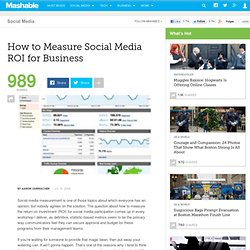 The question about how to measure the return on investment (ROI) for social media participation comes up in every workshop I deliver, as definitive, statistic-based metrics seem to be the primary way communicators feel they can secure approval and budget for these programs from their management teams. If you’re waiting for someone to provide that magic bean, then put away your watering can. The Maturation of Social Media ROI. Brian Solis is a principal at new media agency FutureWorks, and author of the upcoming book, Engage. 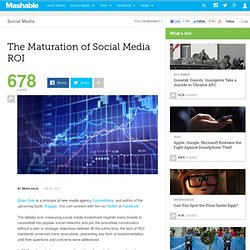 You can connect with him on Twitter or Facebook. The debate over measuring social media investment inspired many brands to cannonball into popular social networks and join the proverbial conversation without a plan or strategic objectives defined. At the same time, the lack of ROI standards unnerved many executives, preventing any form of experimentation until their questions and concerns were addressed. In 2010, we're entering a new era of social media marketing — one based on information, rationalization, and resolve.

Business leaders simply need clarity in a time of abundant options and scarcity of experience. Over the years, our exploration and experience has redefined the traditional metrics and created hybrid models that will prove critical to modern business practices and help companies effectively compete for the future. A new way to measure word-of-mouth marketing - McKinsey Quarterly - Marketing - Strategy. Consumers have always valued opinions expressed directly to them. 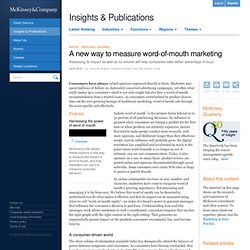 Marketers may spend millions of dollars on elaborately conceived advertising campaigns, yet often what really makes up a consumer’s mind is not only simple but also free: a word-of-mouth recommendation from a trusted source. As consumers overwhelmed by product choices tune out the ever-growing barrage of traditional marketing, word of mouth cuts through the noise quickly and effectively. A Framework for Social Analytics. Social Business Planning. How To Monitor Your Brand Online (Without Losing Your Shirt)

Let’s face it, in some cases monitoring your brand online through systems such as Radian6 might not just be out of your budget, they can also be overkill if you’re a personal brand or a small business. 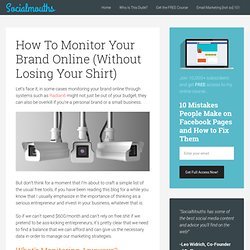 But don’t think for a moment that I’m about to craft a simple list of the usual free tools, if you have been reading this blog for a while you know that I usually emphasize in the importance of thinking as a serious entrepreneur and invest in your business, whatever that is. So if we can’t spend $600/month and can’t rely on free shit if we pretend to be ass-kicking entrepreneurs, it’s pretty clear that we need to find a balance that we can afford and can give us the necessary data in order to manage our marketing strategies.

What’s Monitoring Anyways? Monitoring your brand means being aware of who mentions your brand, what they say, where and when. Why You Need To Monitor Your Brand The main reason to monitor your brand is so you can react to those mentions, hopefully in a timely manner. Social Media Strategy-50 Articles to Expand Your Perspective. Companies Must Ascend the Social Business Hierarchy of Needs. 9+ Free Trials That Can Instantly Improve Your Online Marketing Efforts. I just wanted to share some of the Internet’s most incredibly marketing software that can help you instantly improve your rankings, conversion rates, and revenues in a relatively short amount of time.

And oh yeah, you can try each for free! 1) Ontolo Ontolo is an extremely powerful (semi) automated link prospecting and building tool that can help your business dramatically improve its link profile in a relatively short amount of time. The trial period is 14 days and will provide you with 1000+ new link prospects for the whopping price of [substring:0:1000] I just wanted to share some of the Internet’s most incredibly marketing software that can help you instantly improve your rankings, conversion rates, and revenues in a relatively short amount of time.

Social Media Statistics. 35 Great Social Media Infographics. 35 Great Social Media Infographics [Note: I recently updated this compilation to include some more recent visualizations... you can see it here.] Here’s a collection of terrific social media infographics that might come in handy. As you probably know, infographics are visual representations of information, data, or knowledge. They illustrate information that would be unwieldy in text form and they act as a kind of visual shorthand, making information easy to understand and consume. They are driven by the same information as charts, but they’re often a better form of communication because of their pleasant aesthetics — charts and graphs can communicate data, but infographics turn data into information. It’s very helpful to use infographics in presentations, reports, articles, etc., to convey concepts. 50 of the Best Social Media Guides, Tips and Insights of 2011 (So Far)

Social media marketing has gone well beyond the hype stage and is now mainstream business practice. Still, questions remain: how do I use social media most effectively across the enterprise? [Réseaux sociaux] 60% des internautes rejettent les marques. Les marques doivent mieux cibler leurs discours en fonction de leurs cibles. How People Share Content On The Web. Don’t Call Me, I Won’t Call You. How Social Media Can Induce Feelings of ‘Missing Out’ The Pyschology of Influence and Sharing. The NYTimes recently covered researchout of the University of Pennsylvania to understand the drivers of the NYTimes "most-emailed" list which appears on their site and reflects what stories readers are sending around the most. I continue to believe that psychology is the next rediscovered territory for marketers. A Herd Makes Money on Wall Street. Everything is contagious. This is the second of two articles on the recent outbreak of social contagion studies. The newspapers are saying a social plague has struck mankind.

Scientists contend that everything from obesity to happiness to loneliness can be "socially contagious"—meaning that if your friend gets fat, gets happy or grows lonely, you are at increased risk of doing the same. The leading advocates for the new social contagionism are sociologist Nicholas Christakis and political scientist James Fowler. Their work—now summarized in a popular book called Connected —suggests that our behaviors, emotions, and even our body types can be passed from friend to friend to friend like a flu virus.

As Fowler told Stephen Colbert in a January interview, the research suggests that people don't really make individual decisions at all but, instead, function as part of a "human superorganism"—like a herd of buffalo or a flock of birds. The “Sharing” Mirage. This week’s most stunning statistic: In February, Facebook drove more traffic to the Guardian web site than Google did. This fact was proffered (I couldn’t bring myself to write shared) at the Changing Medias Summit Conference by Tanya Corduroy, Guardian’s director for digital development (full text of her speech): Eighteen months ago, search represented 40% of the Guardian’s traffic and social represented just 2%. Six months ago – before the launch of our Facebook app – these figures had barely moved. A recent Pew report echoed these figures, revealing that just 9% of digital news consumers follow news recommendations from Facebook or from Twitter.

That compares with 32% who get news from search. But last month, we felt a seismic shift in our referral traffic. She made her point with a graph showing the crossing of the two traffic lines, even though the Facebook referrals now appear to be receding: This is obviously a great achievement for the team who created the FB app. . #2: Control. 8 Ways to Improve Your Live Event With Social Media. Clay McDaniel is the principal and co-founder of social media marketing agency Spring Creek Group.

Find him via @springcreekgrp on Twitter. Do you remember life before Evite, Facebook Events, and Eventbrite? Web 2.0 Suicide Machine - Meet your Real Neighbours again! - Sign out forever! I am absolutely sure that my Facebook login details are correct, but the machine answers always with "Wrong password, dude! "? The facebook screen shows a message like "You are signing in from an unfamiliar location. Connecting with Today’s Customer. Yahoo closing down Delicious; but why won&#039;t Carol use the F-word?

In which we dissect Carol Bartz's memo to the Yahoo troops, after many were given "pink slips" – the American equivalent of the P45 – on Thursday. Because the question is still: what is Yahoo for? Yahoos, Social Media Still Not a Big Deal. Social network analysis software. Mining social networks: Untangling the social web. TELECOMS operators naturally prize mobile-phone subscribers who spend a lot, but some thriftier customers, it turns out, are actually more valuable. Known as “influencers”, these subscribers frequently persuade their friends, family and colleagues to follow them when they switch to a rival operator. The trick, then, is to identify such trendsetting subscribers and keep them on board with special discounts and promotions.