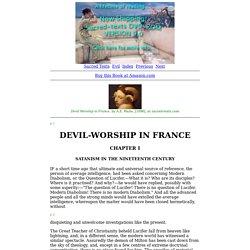 Waite, [1896], at sacred-texts.com p. 1 IF a short time ago that ultimate and universal source of reference, the person of average intelligence, had been asked concerning Modern Diabolism, or the Question of Lucifer,—What it is? P. 2 disquieting and unwelcome investigations like the present. Copy than translate text - Bois Les Petites Religions de Paris - see "le Culte d'ISIS' Auguste Villiers de l'Isle-Adam - ISIS worshipper, promoter, wrote a book called ISIS. Life[edit] Villiers de l'Isle-Adam was born in Saint-Brieuc, Brittany, to a distinguished aristocratic family. 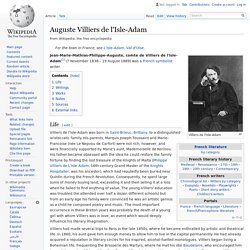 His parents, Marquis Joseph-Toussaint and Marie-Francoise (née Le Nepvou de Carfort) were not rich, however, and were financially supported by Marie's aunt, Mademoiselle de Kerinou. His father became obsessed with the idea he could restore the family fortune by finding the lost treasure of the Knights of Malta (Philippe Villiers de L'Isle-Adam, 16th-century Grand Master of the Knights Hospitaller, was his ancestor), which had reputedly been buried near Quintin during the French Revolution. Consequently, he spent large sums of money buying land, excavating it and then selling it at a loss when he failed to find anything of value. The young Villiers' education was troubled (he attended over half a dozen different schools) but from an early age his family were convinced he was an artistic genius: as a child he composed poetry and music. 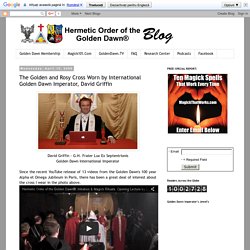 Frater Lux Ex Septentrionis Golden Dawn International Imperator Since the recent YouTube release of 13 videos from the Golden Dawn's 100 year Alpha et Omega Jubileum in Paris, there has been a great deal of interest about the cross I wear in the photo above. Certain misinformed (or perhaps even ill intentioned) individuals have repeatedly and erroneously suggested I am wearing a German Iron or perhaps even Nazi cross. As is so often the case, the truth in this instance even is more fabulous than the rumors people spread based on malice or mere ignorance. Alpha et Omega. The Alpha et Omega is an occult order, initially named the Hermetic Order of the Golden Dawn, co-founded in London, England by Samuel Liddell MacGregor Mathers in 1888.[1][2] The Alpha et Omega was one of four daughter organisations into which the Hermetic Order of the Golden Dawn fragmented, the others being the Stella Matutina; the Isis-Urania Temple led by A.E. 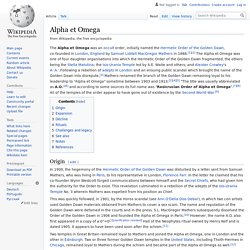 Waite and others; and Aleister Crowley's A∴A∴.Following a rebellion of Adepts in London and an ensuing public scandal which had brought the name of the Golden Dawn into disrepute,[3] Mathers renamed the branch of the Golden Dawn remaining loyal to his leadership to "Alpha et Omega" sometime between 1903 and 1913.[2][4][5] "The title was usually abbreviated as A.O.

"[6] and according to some sources its full name was "Rosicrucian Order of Alpha et Omega".[7][8] All of the temples of the order appear to have gone out of existence by the Second World War.[9] Origin[edit] Expansion[edit] Decline[edit] Rituals[edit] See also[edit] Theosophy: History of a Pseudo-religion - René Guénon, Alvin Moore, Jr. 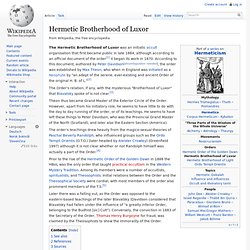 According to this document, authored by Peter Davidson[disambiguation needed], the order was established by Max Theon, who when in England was initiated as a Neophyte by "an adept of the serene, ever-existing and ancient Order of the original H. B. of L. "[2] Www.amazon. Fathers of the Modern Occult Revival. While contributors to the modern occult revival have been diverse, and most are interesting and colorful characters, two can be marked out as its ‘fathers.’ 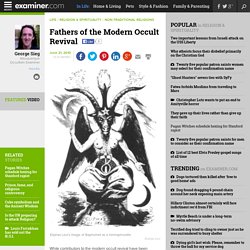 Alphonse Louis Constant was born the son of a Parisian cobbler in 1810. His first vocation was to the Roman Catholic priesthood, but he was never ordained due to abandoning his seminarian studies for romantic reasons. After leaving the seminary, his involvement in radical left-wing politics and publication of subversive tracts in 1848 landed him in prison twice. In 1854, a year after he met English Rosicrucian novelist Edward Bulwer-Lytton, whose book Zanoni famously described esoteric initiation and spiritual conflict between black and white magicians, Constant wrote his famous masterwork The Dogma and Ritual of High Magic.

He had Hebraized his name into Eliphas Levi, due to his conviction that the Hebrew Qabalah provided a sound basis for Western magic. WAHHABISM AND THE OCCULT CONSPIRACY. Submitted by David Livingstone on Sun, 03/25/2007 – 14:05. 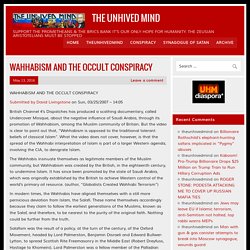 Muslim Brotherhoid - Lytton (Black terror book) Jamal ud Din Al Afghani Beginning in the 1820’s, a group of missionaries was appointed by a combined movement of Oxford University, the Anglican Church, and Kings College of London University, under Scottish Rite Freemasonry, as part of a plot to foster the creation of an occult brotherhood in the Muslim world, dedicated to the use of terrorism on behalf of the Illuminati in the City of London.[1] The leading promoters of the Oxford Movement were Prime Minister Benjamin Disraeli, Lord Palmerston of the Palladian Rite, and Edward Bullwer-Lytton, the leader of a branch of Rosicrucianism that developed from the Asiatic Brethren. 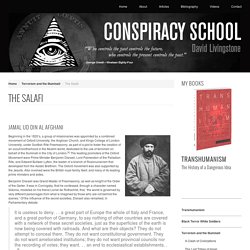 The Oxford movement was also supported by the Jesuits. Also involved were the British royal family itself, and many of its leading prime ministers and aides. Sabbatai Zevi. Sabbatai Zevi (Hebrew: שַׁבְּתַי צְבִי, other spellings include Shabbetai Ẓevi, Shabbeṯāy Ṣeḇī, Shabsai Tzvi, and Sabetay Sevi in Turkish) (August 1, 1626 – c. 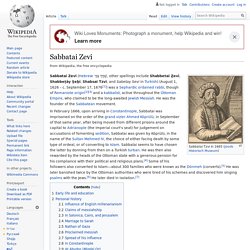 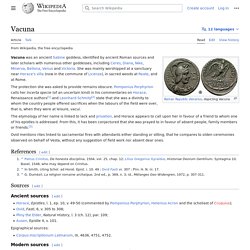 Pomponius Porphyrion calls her incerta specie (of an uncertain kind) in his commentaries on Horace. Renaissance authors[1] and Leonhard Schmitz[2] state that she was a divinity to whom the country people offered sacrifices when the labours of the field were over, that is, when they were at leisure, vacui. The etymology of her name is linked to lack and privation, and Horace appears to call upon her in favour of a friend to whom one of his epistles is addressed.

From this, it has been conjectured that she was prayed to in favour of absent people, family members or friends.[3] Period sources[edit] Literary sources: Steiner author of the Goddess, later of 'ISIS Mary Sophia'. Joachim of Fiore - mirrors Crowleys 3 ages. Joachim of Flora, in a 15th-century woodcut. Joachim of Fiore, also known as Joachim of Flora and in Italian Gioacchino da Fiore (c. 1135 – 30 March 1202), was the founder of the monastic order of San Giovanni in Fiore. He was a mystic, a theologian, and an esotericist. His followers are called Joachimites. Biography[edit] Godlike Productions - Membership Contract. You are attempting to enter a private internet forum. Entrance to this private establishment requires membership but not an account. Membership Contract: Edward Bulwer-Lytton - English occultist, author of Vrill / The Coming Race - influenced HPB & Theosophy in general.

British statesman and author Life[edit] Bulwer was born on 25 May 1803 to General William Earle Bulwer of Heydon Hall and Wood Dalling, Norfolk and Elizabeth Barbara Lytton, daughter of Richard Warburton Lytton of Knebworth House, Hertfordshire. He had two older brothers, William Earle Lytton Bulwer (1799–1877) and Henry (1801–1872), later Lord Dalling and Bulwer. When Edward was four, his father died and his mother moved to London. He was a delicate, neurotic child and discontented at a number of boarding schools. In 1822 Bulwer-Lytton entered Trinity College, Cambridge, where he met John Auldjo, but soon moved to Trinity Hall. Edward Bulwer-Lytton. In August 1827, he married Rosina Doyle Wheeler (1802–1882), a noted Irish beauty, but against the wishes of his mother, who withdrew his allowance, so forcing him to work for a living. Levi knows Bulwer Lyton, Herefordshire occultist, author of the Vrill - Hitler influence. Levi visits Vintras at Markybone Road, London.

Vintras - mentor was Mdme Bouche, visited London. 1839 l'Oeuvre de la Miséricorde / Church of Carmel Pierre-Eugène-Michel Vintras (1807-1875) claimed a great vision in which the archangel Michael appeared as well as the Holy Ghost, St.Joseph, and the Virgin Mary. Levi & Vintras meet at Paris & Brussels. Rosecrusciians wanted the age of the Paraclete - occult energy thrives in the lead up to war. FLCH: Levi influenced Blavatsky, Golden Dawn & Crowley. Crowley, Vintras, Levi - a daughter each died in childhood - all known to Sacrifice. Occultists as agitators for revokution - Russia, France. Link vetween Levi & War of the Roses? What, How? Temple of ISIS - Cagliostro as High Priest - Paris, Rue de la Sondierre, 1800s. Johannites wanted the age of the Paraclete; material world, Elysium and socialism; somehow Levi's teachings got into politics. Vintras, Boullin - Satanists - tatoo of the Dove on Vintras' forehead, emulated by Boullin as a pentagram - this is ISIS=Lucifer.

Translate. 1840s: non-Masonic French Johannites initiating the French Revolution, the age of the Holy Spirit & feminine, sion? Beheading of St. John the Baptist. Crowley inducted HPB into AA as Magister Templi - wanted to usurp Krishnamurti as World Teacher. From Thelemapedia Categories: Religion Part of the Thelema & Religion series Theosophy is a term which has been applied to various schools of Western mysticism.

Its earliest prominent use is to designate the work of Jacob Boehme and those who embraced his ideas. In 1783, a group of English Behmenists were meeting as the "London Theosophical Society. " Helena Blavatsky and her collaborators instituted a Theosophical Society in 1875. Pope Francis Calls For Worldwide Communist Government.