With over 100 years of experience, Arpin is a privately owned moving company that provides only the best in moving services for corporate, government, military, and residential customers.

Vehicles Of The Not-So-Distant Future. Golfing For A Cause. Last month, the fourth annual Arpin Strong Golf tournament took place and it’s safe to say that it was the best one yet. 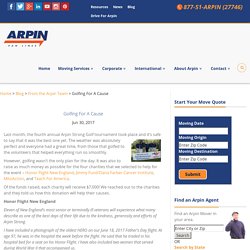 The weather was absolutely perfect and everyone had a great time, from those that golfed to the volunteers that helped everything run so smoothly. However, golfing wasn’t the only plan for the day. It was also to raise as much money as possible for the four charities that we selected to help for the event – Honor Flight New England, Jimmy Fund/Dana Farber Cancer Institute, MitoAction, and Teach For America. Of the funds raised, each charity will receive $7,000! Honor Flight New England. Are You Moving With The Crowd? The moving industry’s busy season is upon us! 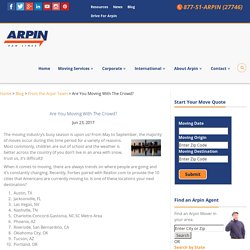 From May to September, the majority of moves occur during this time period for a variety of reasons. Year Two For The Arpin Garden. Last year, the Arpin Sustainability Committee started up an employee-run vegetable garden and it’s back for year two! 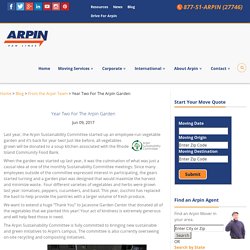 Just like before, all vegetables grown will be donated to a soup kitchen associated with the Rhode Island Community Food Bank. International Roadcheck 2017. Attention all drivers! 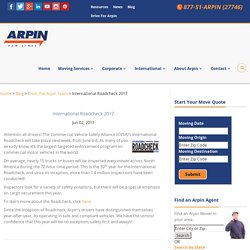 The Commercial Vehicle Safety Alliance (CVSA)’s International Roadcheck will take place next week, from June 6-8. As many of you already know, it’s the largest targeted enforcement program on commercial motor vehicles in the world. On average, nearly 15 trucks or buses will be inspected every minute across North America during the 72-hour time period. This is the 30th year for the International Roadcheck, and since its inception, more than 1.4 million inspections have been conducted! Balancing Moving, Work, and Life. It’s very easy to get overwhelmed when you have a bunch of things on your plate. 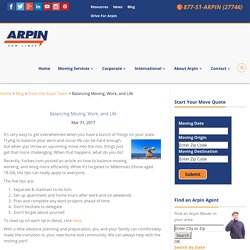 Trying to balance your work and social life can be hard enough, but when you throw an upcoming move into the mix, things just get that more challenging. When that happens, what do you do? Recently, Forbes.com posted an article on how to balance moving, working, and living more efficiently. While it’s targeted to Millennials (those aged 18-34), the tips can really apply to everyone. Do You Follow Us Everywhere? First and foremost, thank you for following us! 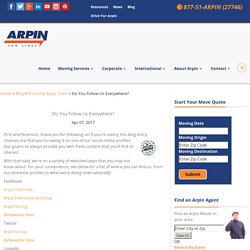 If you’re seeing this blog entry, chances are that you’re seeing it on one of our social media profiles. Maricopa County, AZ Leads The Way In Annual Growth. The U.S. 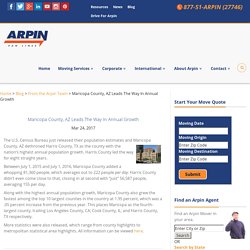 Census Bureau just released their population estimates and Maricopa County, AZ dethroned Harris County, TX as the county with the nation’s highest annual population growth. Harris County led the way for eight straight years. Moving In With Your Significant Other. Are you planning on moving in with your significant other soon? 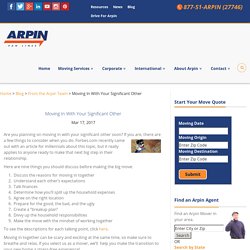 If you are, there are a few things to consider when you do. Forbes.com recently came out with an article for millennials about this topic, but it really applies to anyone ready to make that next big step in their relationship. Celebrating National Women’s History Month. The month long celebration known today as National Women’s History Month has transformed over time since it all began in 1911. 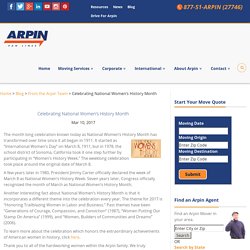 It started as “International Women’s Day” on March 8, 1911, but in 1978, the school district of Sonoma, California took it one step further by participating in “Women’s History Week.” The weeklong celebration took place around the original date of March 8. A few years later in 1980, President Jimmy Carter officially declared the week of March 8 as National Women’s History Week. Seven years later, Congress officially recognized the month of March as National Women’s History Month. Arpin Driver Assists Operation Shoebox. The Top Destinations For Millionaires. Earlier last month, we told you the top destinations for Millennials (those aged somewhere between 18 and 34 years old), but what about Millionaires? 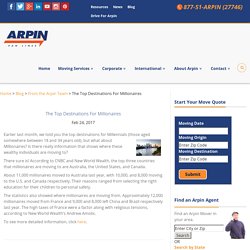 Is there really information that shows where these wealthy individuals are moving to? There sure is! According to CNBC and New World Wealth, the top three countries that millionaires are moving to are Australia, the United States, and Canada. Arpin Begins Composting. The Arpin Sustainability Committee has started a new sustainable initiative at Arpin headquarters in the form of a compost station! Composting has been an idea brought up by employees in the past and the committee was able to see it through. There are two areas at Arpin headquarters where composting is taking place: in the cafeteria and right next to the employee-run garden that was started last June. In the kitchen is a one-gallon compost bin, where employees are encouraged to contribute any food or vegetable scraps that they may have. Moving Tips and Resources: Five Reasons Why You Should Hire Long Distance Movers. Whether you're moving into a studio apartment or a four-bedroom single family house, moving can be quite stressful, time-consuming, and costly if you're not careful.

The adverse effects of a poorly managed move are only exacerbated when it's a long-distance move across the state or across the country. If something goes wrong with a local move, this is one thing. If it happens when you need to move a thousand miles away, it could affect you much more significantly. This is why hiring long distance movers is incredibly important. Here are a few reasons why: The Best Getaways For Valentine’s Day. Ladies and gentleman, take note, Valentine’s Day is four days away! We’re sure you already have everything planned right? Celebrating Black History Month. Since being recognized by the U.S. government in 1976, every February has been dedicated to celebrating Black History Month, which highlights the achievements of black Americans and the central role African Americans play in U.S. history.

Here are some facts you may not have known about the month! Canada (1987) and the UK (1995) also celebrate Black History Month, but the UK celebrates it in October. Black History Month originated from “Negro History Week”, which was established in 1926 by the Association for the Study of African American Life and History (ASALH) to coincide with the birthdays of Abraham Lincoln and Frederick Douglass.

The ASALH, then known as the ASNLH, was founded in 1915 by Harvard-trained historian Carter G. To check out some related videos and speeches, you can click here. Defense Wins Championships (And Battles Against Hackers) This past month, Arpin Group completed a cybersecurity penetration test to protect Arpin against any type of hacking activity. The test was administered by an independent firm called Digital Boundary Group, which specializes in making companies hacker-proof.

These tests are appropriately named “penetration tests,” as DBG actually attempts to break into Arpin’s systems by exploiting possible points of vulnerability. Basically, DBG deploys the same methods that a criminal would use. Since technology is always evolving, these tests will continue annually to protect Arpin against the latest possible threats. The Best States In The U.S. To Make A Living.

The Top Destinations For Millennials. We’ve all heard the term “Millennials” before, but what age range of people does that. Notable Events in 2017. Just like that, 2016 has come to a close. Here’s To 2016 - An Amazing Year. Arpin Employees Continue To Help The Community. When the Arpin Charitable Fund, also known as Arpin Strong, was established in 2013, the goal was to always help those in need however possible.

Since that time, Arpin Strong has donated to countless charities and Arpin employees have attended many community service events. That initial goal is a continued mission here at Arpin. Arpin employees helped out at two community service events this month. A Time To Give. Become An Expert Wrapper This Holiday Season. At Arpin, we may know a thing or two about boxes. We pack them, tape them up, and deliver them to homes every day. While we’re experts at delivering boxes, you might want to learn how to become an expert with delivering presents to loved ones this holiday season. Arpin's 2016 Driver of the Year - Steve Lee.

The Change Of Clothing – Summer To Fall. Arpin Takes Home Multiple Awards For Leadership, Values, and Performance. We were honored to receive the Global Citizenship Award at Cartus Corporation’s 2016 Global Network Conference, held October 3-4 in Washington, DC. Congrats to Steven Lee – Arpin’s 2016 Driver of the Year! “Leaving the Middle Kingdom for the New World – My move from China to the U.S.” Moving 101 Basics. 2016 Arpin Agent Spring Meeting Is A Hit! AMSA Leaders Program: Paving the Way for the Future of the Moving Industry. Daly Movers Helps “Mummies of the World” In Case You Missed It. Words of Wisdom From A Relocation Professional. Is Austin The New Place To Be? The Decision To Ban The Moving Of Hoverboards. Senior Moving Discounts. Small Moving Solutions. Moving Service for Boats & Vehicles. Military Moving Company. Veteran Moving Discounts. Local Moving Company.