Resources for Aspiring Mobile Developers - Dice Insights. How can I get started in mobile development? 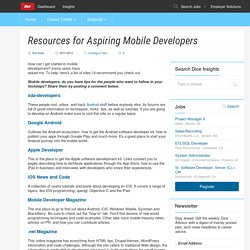 Some users have asked me. To help, here’s a list of sites I’d recommend you check out. Mobile developers, do you have tips for the people who want to follow in your footsteps? Share them by posting a comment below. Sample Resume: Freelance iOS Developer - Dice Insights. William “Bill” Rodgerswillrodgers@email.com 000.555.1212 300 North Street, Unit A San Jose, CA 00000Portfolio: [Insert URL]LinkedIn: www.linkedin.com/wrodgersGitHub: www.github.com/iOSguru Summary:Results-oriented iOS developer with more than three years’ experience writing highly readable, clean, maintainable source code. 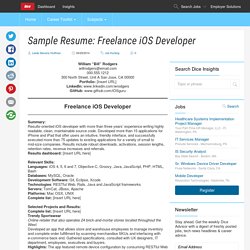 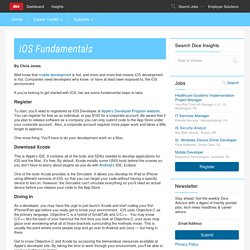 Companies need developers who know, or have at least been exposed to, the iOS environment. If you’re looking to get started with iOS, her are some fundamental steps to take. Register To start, you’ll need to registered as iOS Developer at Apple’s Developer Program website. One more thing: You’ll have to do your development work on a Mac. Download Xcode This is Apple’s IDE. One of the tools Xcode provides is the Simulator. Diving In As a developer, you may have the urge to just launch Xcode and start coding your first iPhone/iPad app before you really get to know your environment. iOS uses Objective-C as the primary language. Get to know Objective-C and Xcode by accessing the tremendous resources available at Apple’s developer site.

Finding Your Way: Mastering Android and iOS - Dice Insights. Mobile development is hot right now, and while most companies want developers that are strong in either Android or iOS, they seem to love those that are exposed to both. 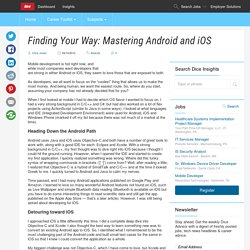 As developers, we all want to focus on the “coolest” thing that allows us to make the most money. And being human, we want the easiest route. So, where do you start, assuming your company has not already decided that for you? When I first looked at mobile I had to decide which OS flavor I wanted to focus on. I had a very strong background in C/C++ and C#, but had also worked on a lot of flex projects using ActionScript (similar to Java in some ways). Heading Down the Android Path. Objective-C : les propriétés : Objective-C : les fondamentaux pour le développement iOS 6. On a vu que les variables d'instance d'une classe ne sont pas accessibles par les autres objets. 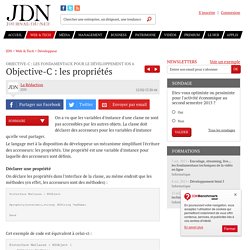 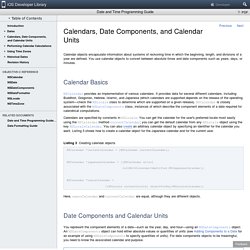 You use calendar objects to convert between absolute times and date components such as years, days, or minutes. Calendar Basics NSCalendar provides an implementation of various calendars. Calendars, Date Components, and Calendar Units. Calendar objects encapsulate information about systems of reckoning time in which the beginning, length, and divisions of a year are defined. 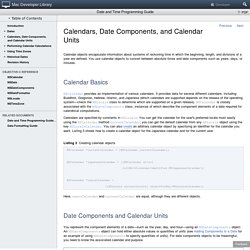 You use calendar objects to convert between absolute times and date components such as years, days, or minutes. Calendar Basics NSCalendar provides an implementation of various calendars. It provides data for several different calendars, including Buddhist, Gregorian, Hebrew, Islamic, and Japanese (which calendars are supported depends on the release of the operating system—check the NSLocale class to determine which are supported on a given release). NSCalendar is closely associated with the NSDateComponents class, instances of which describe the component elements of a date required for calendrical computations. Calendars are specified by constants in NSLocale. ZeroHeroBlog. That thing in swift By Krzysztof Satola|iOS, Resource Yes, this is the first post related to swift on this blog. 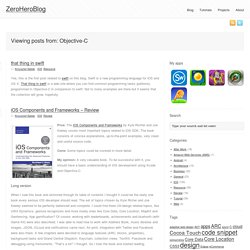 Swift is a new programming language for iOS and OS X. That thing in swift is a web site where you can find common programming tasks (patterns) programmed in Objective-C in comparison to swift. Not to many examples are there but it seems that the collection will grow, hopefully. iOS Programming. NSCalendar Class Reference. Calendars encapsulate information about systems of reckoning time in which the beginning, length, and divisions of a year are defined. 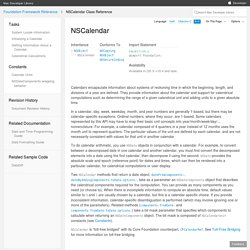 They provide information about the calendar and support for calendrical computations such as determining the range of a given calendrical unit and adding units to a given absolute time. In a calendar, day, week, weekday, month, and year numbers are generally 1-based, but there may be calendar-specific exceptions. Ordinal numbers, where they occur, are 1-based. Some calendars represented by this API may have to map their basic unit concepts into year/month/week/day/… nomenclature. For example, a calendar composed of 4 quarters in a year instead of 12 months uses the month unit to represent quarters. To do calendar arithmetic, you use NSDate objects in conjunction with a calendar. 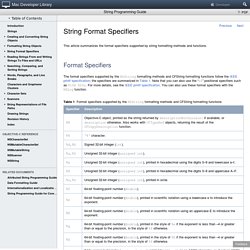 It’s a superset of the C programming language and provides object-oriented capabilities and a dynamic runtime. Objective-C inherits the syntax, primitive types, and flow control statements of C and adds syntax for defining classes and methods. It also adds language-level support for object graph management and object literals while providing dynamic typing and binding, deferring many responsibilities until runtime.

At a Glance This document introduces the Objective-C language and offers extensive examples of its use. An App Is Built from a Network of Objects When building apps for OS X or iOS, you’ll spend most of your time working with objects. If you’re writing your own class, start by providing a description of the class that details the intended public interface to instances of the class. Categories Extend Existing Classes Protocols Define Messaging Contracts Blocks Simplify Common Tasks. 3. Custom Classes, Memory Management, and ObjC Properties.