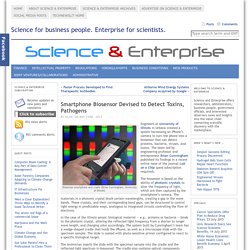 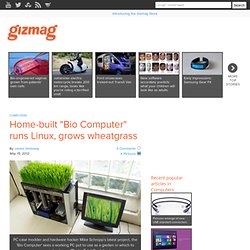 Mindful Gizmag readers may recall his triple quad-core i7 LEGO PC housing that we looked at last July. But his latest project, the "Bio Computer," is rather more oddball, taking a turn distinctly towards the horticultural with a PC case adapted to ... grow wheatgrass. 10 High-Tech Health Breakthroughs Coming Soon to Your Body. Magnetic Brain Stimulation For the 20 percent of depressed patients who don't respond to drugs such as Prozac, the traditional last-ditch treatment option has been electroshock therapy. 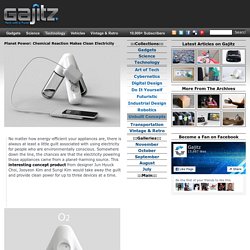 Somewhere down the line, the chances are that the electricity powering those appliances came from a planet-harming source. This interesting concept product from designer Jun Hyuck Choi, Jooyeon Kim and Sungi Kim would take away the guilt and provide clean power for up to three devices at a time. The Eco Power Strip works on the concept of electrolysis: two liquids combine to create electricity. The small devices certainly wouldn’t be powerful enough to provide juice for a washer and dryer, but they could provide enough power to charge a mobile phone or MP3 player. 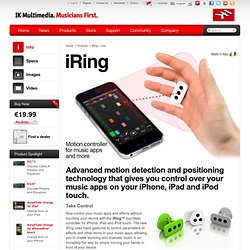 The new iRing uses hand gestures to control parameters of effects and other items in your music apps, allowing you to create stunning and dramatic music in an incredibly fun way by simply moving your hands in front of your device. iRing uses patented advanced image-recognition, motion control and precise geometric positioning technology to give you control of assignable parameters within your apps. It uses the front-facing camera on your device to determine the exact position of the wearable rings, and recognizes and tracks the movement of the linear or triangular patterned iRing “rings” allowing you to control up to six parameters at a time.

Making music and creating killer real time effects for nonstop dance music and grooves is now easy and as simple as moving your hands… something you probably already do. GoPro. The wireless network with a mile-wide range that the “internet of things” could be built on. Anti-NSA Blackphone: Encrypted Smartphone Designed to Liberate Users From Total Surveillance.

Www.rt.com Silent Circle – an encryption firm that has made it its mission to defy NSA snooping – is releasing what it says will be the world’s most secure smartphone. 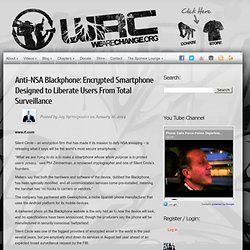 “What we are trying to do is to make a smartphone whose whole purpose is to protect users’ privacy,” said Phil Zimmerman, a renowned cryptographer and one of Silent Circle’s founders. Makers say that both the hardware and software of the device, dubbed the Blackphone, has been specially modified, and all communication services come pre-installed, meaning the handset has “no hooks to carriers or vendors.” The company has partnered with Geeksphone, a niche Spanish phone manufacturer that uses the Android platform for its mobile devices.

Private Communications. Flutter Wireless - Arduino with 1km+ range via Kickstarter. The Anonymous Tor Network Now Comes in a Box. Photo via Flickr I have the Tor browser running on my computer, and it took me about two minutes to download. 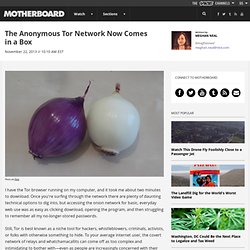 Once you're surfing through the network there are plenty of daunting technical options to dig into, but accessing the onion network for basic, everyday web use was as easy as clicking download, opening the program, and then struggling to remember all my no-longer-stored passwords. Through a glass, clearly. One of the most instantly recognizable features of glass is the way it reflects light.

Titanium foam could make your bones as strong as Wolverine's. Conductive ink. 'Conductive ink' is an ink that results in a printed object which conducts electricity. 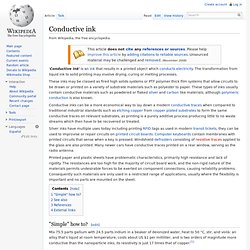 The transformation from liquid ink to solid printing may involve drying, curing or melting processes. You can draw circuit boards onto paper with this pen (video) 'Uncrackable' codes set for step up. 4 September 2013Last updated at 13:09 ET By Melissa Hogenboom Science reporter, BBC News Quantum cryptography is a way to share secret digital keys A system that allows electronic messages to be sent with complete secrecy could be on the verge of expanding beyond niche applications. 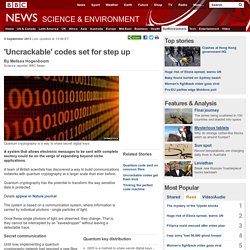 A team of British scientists has discovered a way to build communications networks with quantum cryptography at a larger scale than ever before. LED light bulb 'li-fi' closer, say Chinese scientists. Nanowire battery can hold 10 times the charge of existing lithium-ion battery. Stanford Report, December 18, 2007 Courtesy Nature Nanotechnology Photos taken by a scanning electron microscope of silicon nanowires before (left) and after (right) absorbing lithium.

DataSTICKIES - Design Concept for the next Generation of Data Portability. Breakthrough Nanotechnology Will Bring 100 Terabyte 3.5-inch Digital Data... Have you ever dream of 100 terabyte of data per 3.5-inch disk? New patented innovation nanotechnology from Michael E.

Thomas, president of Colossal Storage Corporation, makes it real. Test flights approved for world's first practical jetpack. News: New Zealand firm Martin Aircraft Company has been given permission by the country's Civil Aviation Authority to conduct manned test flights on what it claims is the world's first practical jetpack. Martin Aircraft Company has been developing the Martin Jetpack for several years and this ruling could help it meet its target of providing working 'first responder' jetpacks to the military and emergency services by mid-2014.

Test flights will be restricted to a height of six metres and must be conducted above uninhabited ground. SkyJack: The drone that hijacks other drones in mid-air. Dutch inventors build flying car. Hand-Crank USB Charger. Step #1: Underwater wi-fi given test run to create 'deep-sea internet' 16 October 2013Last updated at 07:08 ET. Thermal invisibility cloak in first demonstration.