Orbitally rearranged monatomic elements. Zero Point Technologies, Monoatomic Gold, and The Secret of Modern Alchemy. Is monoatomic gold real? Ormus Elements and Monoatomic Gold. Ormus – What Then Is It? « InnerMorphosis. Ormus Alchemy: The Marriage of Science and Spirit All physical matter is made up of one or more of 92 known elements, as can be seen on a Periodic Table of Elements in any biology or chemistry textbook. 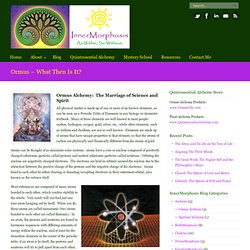 Many of these elements are well known to most people: carbon, hydrogen, oxygen, gold, silver, etc., while other elements, such as iridium and rhodium, are not so well known. Elements are made up of atoms that have unique properties to that element, so that the atoms of carbon are physically and chemically different from the atoms of gold. Atoms can be thought of as miniature solar systems: atoms have a core or nucleus composed of positively charged subatomic particles called protons and neutral subatomic particles called neutrons.

Orbiting the nucleus are negatively charged electrons. Most substances are composed of many atoms bonded to each other, which confers stability to the whole. Remember when I said that the electrons of ORMEs ride a resonance wave in Cooper Pairs? THE TRUTH ABOUT MONATOMICS, WHITE GOLD, AND ORMUS - MYTH BUSTERS. This post has been generated to clarify many misunderstanding about Monatomics, Monatomic Gold, and ORMUS. 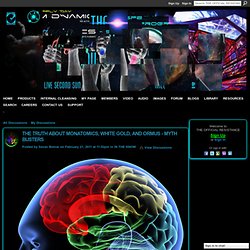 As I spoke of before there seems to be a trend taking place with these so-called spiritual instructors that they must find something new to talk about everyday so they have taken to demonizing everything that will assist people in entering higher states of conscious. Fuck yeah ORMUS! Anna Hayes misinformation. From: Barry Carter <bcarter@igc.org> Subject: ORMUS AND LAURENCE GARDNER CONNECTION Dear Manuela, The web pages you have quoted show such a stunning lack of scientific understanding about the subjects that they address that it is difficult to know where to begin. 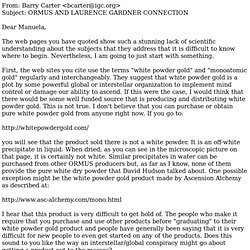 Nevertheless, I am going to just start with something. First, the web sites you cite use the terms "white powder gold" and "monoatomic gold" regularly and interchangeably. They suggest that white powder gold is a plot by some powerful global or interstellar organization to implement mind control or damage our ability to ascend. You will see that the product sold there is not a white powder. I hear that this product is very difficult to get hold of. Second, the use of the term "monoatomic" is probably erroneous. Third, a colleague has trapped ORME silver, copper and gold out of the air and converted it into metal. I have written more on this subject in the past which I will quote now: Dear Friends, Beliefs are structures too. 1. 2. 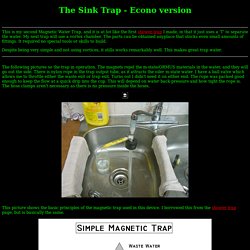 My next trap will use a vortex chamber. The parts can be obtained anyplace that stocks even small amounts of fittings. It required no special tools or skills to build. Despite being very simple and not using vortices, it stills works remarkably well. This makes great trap water. The following pictures so the trap in operation.

This picture shows the basic principles of the magnetic trap used in this device. I am going to be building a large vortex trap which will filter all the water used in our house. For more information about water traps, check out the Subtle Energies website. Return to M-state materials Research I can be reached on the ormus_swg · Science Workgroup. Page design and graphics were created by Justin Szymanek, you may not use them with out my permission. Filtrer l'ORMUS. MDG's website is divided in parts, with direct access through click on the following banners: ORMUS Index - Map - Links xxxxxxx TRAPS - FERTILIZER - DAVID HUDSON - BARRY CARTER - HEALTH TESTIMONIALS - SCIENTIFIC - HISTORY - PRODUCTS - WATER MYSTERIES ----------- MAGNETIC TRAPS - WET METHOD - OTHER METHODS ### ORMUS MAGNETIC TRAPS: How to catch ORMUS in the water ... with magnet. 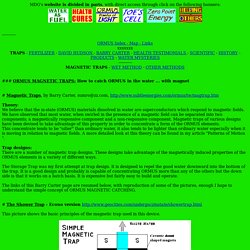 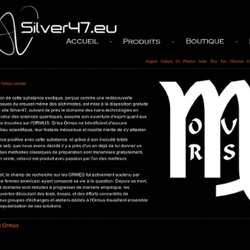 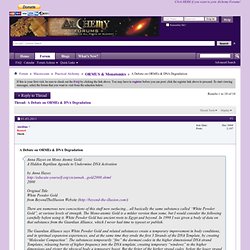 The Mono-atomic Gold is a milder version than some, but I would consider the following carefully before using it. White Powder Gold has ancient roots to Egypt and beyond. The Guardian Alliance says White Powder Gold and related substances create a temporary improvement in body conditions, and in spiritual expansion experiences, and at the same time they erode the first 3 Strands of the DNA Template, by creating “Molecular Compaction”. The higher frequencies begin to crush the natural crystalline arrangement of the scalar-wave grids in the lower strand templates, like a hammer on a quartz crystal cluster. White Powder Gold. White powder gold (monoatomic gold), rediscovered by David Hudson and popularized by Laurence Gardner, has been used for ages on this planet to greatly accelerate the ascension process. 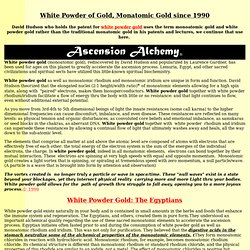 Lemuria, Egypt, and other sacred civilizations and spiritual sects have utilized this little-known spiritual biochemistry. White powder gold as well as monoatomic rhodium and monoatomic iridium are unique in form and function. David Hudson theorized that the elongated nuclei (2:1 height/width ratio)* of monoatomic elements allowing for a high spin state, along with "paired" electrons, makes them biosuperconductors. 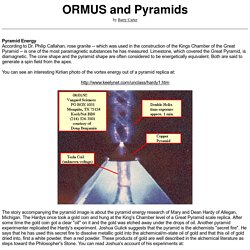 Philip Callahan, rose granite -- which was used in the construction of the Kings Chamber of the Great Pyramid -- is one of the most paramagnetic substances he has measured. Limestone, which covered the Great Pyramid, is diamagnetic. You can see an interesting Kirlian photo of the vortex energy out of a pyramid replica at: The story accompanying the pyramid image is about the pyramid energy research of Mary and Dean Hardy of . Here is a paragraph from his web page: