What is a Magnet? What makes a magnet? Magnetic Fields & Magnetic Force. Magnetism is one aspect of the combined electromagnetic force. 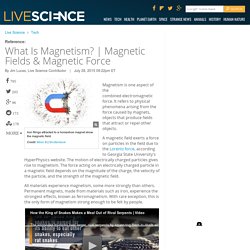 It refers to physical phenomena arising from the force caused by magnets, objects that produce fields that attract or repel other objects. A magnetic field exerts a force on particles in the field due to the Lorentz force, according to Georgia State University's HyperPhysics website. The motion of electrically charged particles gives rise to magnetism.

The force acting on an electrically charged particle in a magnetic field depends on the magnitude of the charge, the velocity of the particle, and the strength of the magnetic field. All materials experience magnetism, some more strongly than others. How the King of Snakes Makes a Meal Out of Rival Serpents | Video The kingsnake triumphs over larger, rival serpents by squeezing them to death with its powerful constriction. Magnetic fields are generated by rotating electric charges, according to HyperPhysics. The Earth itself is a giant magnet. Additional resources. Magnetism. A magnetic quadrupole Magnetism is a class of physical phenomena that includes forces exerted by magnets on other magnets. It has its origin in electric currents and the fundamental magnetic moments of elementary particles.

These give rise to a magnetic field that acts on other currents and moments. All materials are influenced to some extent by a magnetic field. The strongest effect is on permanent magnets, which have persistent magnetic moments caused by ferromagnetism. The magnetic state (or phase) of a material depends on temperature (and other variables such as pressure and the applied magnetic field) so that a material may exhibit more than one form of magnetism depending on its temperature, etc. History[edit] Magnetism. ONDES & MAGNETISME - Pearltrees voisins (sources) 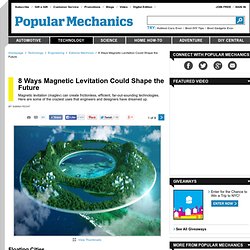 "It would really open up space to human exploration and commercialization," Powell says. "It's something we can't do now because it's too expensive. " Powell and his colleagues have proposed two generations of space launching technology. The first is a cargo-only launch track that could be built into a mountainside to reach a height of 20,000 feet. Magnets could allow a spacecraft traveling along the track to reach speeds around 18,000 miles per hour—enough to fly into space. 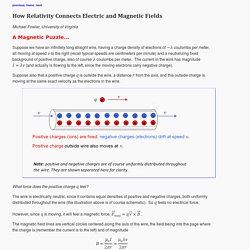 The current in the wire has magnitude I = λv (and actually is flowing to the left, since the moving electrons carry negative charge). Suppose also that a positive charge q is outside the wire, a distance r from the axis, and this outside charge is moving at the same exact velocity as the electrons in the wire. What force does the positive charge q feel? The wire is electrically neutral, since it contains equal densities of positive and negative charges, both uniformly distributed throughout the wire (the illustration above is of course schematic).

However, since q is moving, it will feel a magnetic force, Magnetic Motor.