Ayahuasca Main Index. Mythology - A general introduction to Ayahuasca. The Tukano Story - Description 1 - Ralph Metzner, Ph.D. of the Green Earth Foundation Snakes are very commonin ayahuasca mythology More mythological snakes The Tukano people of the Vaupés region of Colombia say that the first people came from the sky in a serpent canoe, and Father Sun had promised them a magical drink that would connect them with the radiant powers of the heavens. While the men were in the "House of the Waters," attempting to make this drink, the first woman went into the forest to give birth. She came back with a boy radiating golden light, whose body she rubbed with leaves. This luminous boy-child was the vine, and each of the men cut off a piece of this living being that became his piece of the vine lineage. The Tukano Story - Description 2 - Dr. Once upon a time, a long, long time ago there lived among the Tukanoans a woman, the first woman of 'creation' who drowned men in visions.

How ayahuasca can revolutionize psychotherapy - Page 1 - News. Just before dusk, 18 strangers entered a yurt on a Midwestern homestead. 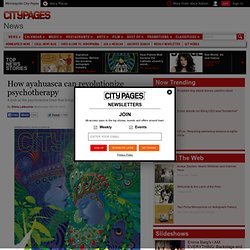 Peruvian tapestries decorated the walls of the large, round structure, and rattles stood poised for ceremony. The participants — professional men and women ages 35 to 65 — put on comfortable clothing and set up sleeping bags, pillows, and blankets. Everyone got a plastic bucket, cheerfully colored in green, red, or blue.

"It looks like a big pajama party," joked the host, Kim. Emily Utne. Ayahuasca. HOME. Mystery of the Goddess Aya by Stuart Wilde Several years ago I became attracted to the ayahuasca temples. 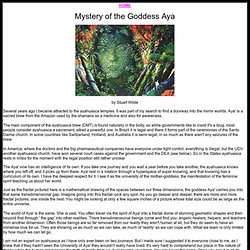 It was part of my search to find a doorway into the mirror worlds. Aya' is a sacred brew from the Amazon used by the shamans as a medicine and also for awareness. The main component of the ayahuasca brew (DMT) is found naturally in the body, so while governments like to insist it's a drug, most people consider ayahuasca a sacrament, albeit a powerful one. In America, where the doctors and the big pharmaceutical companies have everyone under tight control, everything is illegal, but the UDV another ayahuasca church, have won several court cases against the government and the DEA (see below).

The Aya' vine has an intelligence of its own. Just as the fractal pictured here is a mathematical drawing of the spaces between our three dimensions, the goddess Aya' carries you into that same transdimensional gap. The world of Aya' is the same. Once you enter and look back, it changes your life. Preparation for the Personal Ayahuasca Experience. Shamanic Ayahuasca Spirituality and Cleansing: Food and Pharmaceutical Guidelines. Preparation for the Personal Ayahuasca Experience Pharmaceutical Guidelines Drug and Medication Precautions These drugs and medications are known to cause dangerous side effects when taken in conjunction with Ayahuasca. 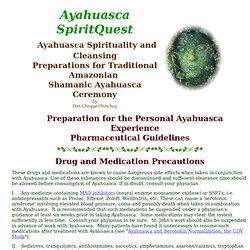 Use of these substances should be discontinued and sufficient clearance time should be allowed before consumption of Ayahuasca. If in doubt, consult your physician. I. II. III. If you use any of these substances, or take any prescribed drugs, please let us know at the time of your application. Those with a record of psychiatric instability, psychosis, diagnosed mental disorder or chronic high blood pressure should not partake of Ayahuasca. Peruvian Ayahuasca recipe. There are many permutations of the classic shamanic formula for the magical healing brew in the upper Amazon. 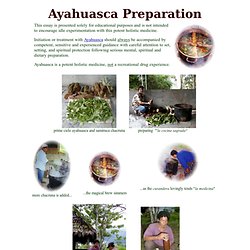 Virtually every shaman and curandero has his or her personal recipe, often incorporating secret components. The nature and spirit of the various admixture plants brings undeniable healing versatility to the medicine, often enriching one's visionary communion with the plants.Here are the "recipes" of some ayahuasqueros we know here in the Iquitos region of Perú.Jose Padilla, Iquitos, Perú (52 years an ayahuasquero)1 kilogram of fresh ayahuasca vine (Banisteriopsis caapi) combined with 50 chacruna leaves (Psychotria viridis). These are boiled in 25-30 liters of water for 2 hours. The water is then poured into another container and more water is added to the original plant material for another extraction lasting 2 ½ hours. This process is repeated a third time then all the extracts are combined and evaporated on a low fire until 1 ½ liters of Ayahuasca tea remain. The traditional ayahuasca diet. 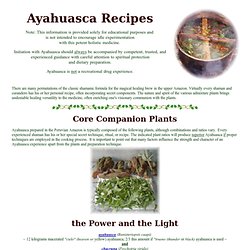