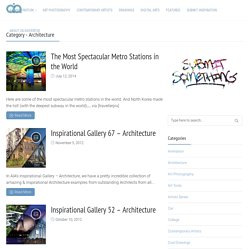 And North Korea made the list! (with the deepest subway in the world)… via [travellerpix] Architects. Landscape Urbanism. Geoff Lawton's Zaytuna Farm Video Tour (Apr/May 2012) - Ten Years of (R)Evolutionary Design. Paradise Dam, April 2012, from the now-climaxing food forest Zaytuna Farm Video Tour, duration 41 minutes Having spent the last few years seeking to establish and assist projects worldwide, and hearing some readers requesting more info on our own permaculture base site, I thought it high time I take a moment away from promoting other projects to shine a little light on our own work! 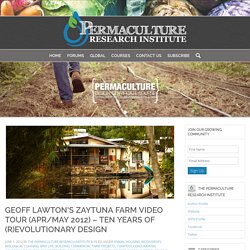 It had been a long time since I last visited Zaytuna Farm. Arriving in April 2012, more than two and a half years after my September 2009 visit, I was somewhat taken aback…. Back in 2009 the farm could somewhat be described as an unruly child — full of energy and enthusiasm, and flush with life, but not at all mature. Geoff’s long term strategies are becoming evident, and it really is a sight, and site, to behold! Diagram of Zaytuna Farm – click for larger view. One Community Pod 2 Details - Straw Bale Ecobuild and Construction. The Venus Project. Great Pyramid Hydraulic Pulse Generator and Water Pump.

[Back to Pinnacle Black Russian Terriers] Stumble It! 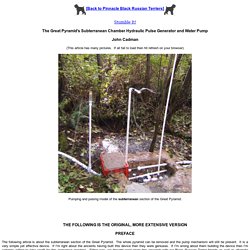 The Great Pyramid’s Subterranean Chamber Hydraulic Pulse Generator and Water Pump. Top 20 World Most Beautiful Living Spaces. 03 Mar 2013 March 3, 2013 If you are browsing internet for Home Ideas, Decoration and Remodeling Tips you are on the right place. 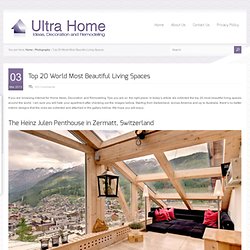 In today’s article we collected the top 20 most beautiful living spaces around the world. I am sure you will hate your apartment after checking out the images bellow. Starting from Switzerland, across America and up to Australia, there’s no better interior designs that the ones we collected and attached in the gallery bellow. THE FISH HOUSE &. Bamboo Architecture Collection. wNw Bar in Binh Duong, Vietnam / Vo Trong Nghia Sinbadesign. Vo Trong Nghia studied architecture as a student on the Japanese Government’s Scholarship. After graduation from Tokyo University and Nagoya Institute of Technology, he returned to Vietnam and created an energy-saving architectural style through using environmentally – friendly materials and architectural design.

In 2006, he started his own architectural company in Vietnam, Votrongnghia Co. , Ltd . Alongside his architectural practice, Nghia has been invited to have lectures in several foreign countries such as China, Japan, Sri Lanka … Bamboo Wing in Vinh Phuc province, Vietnam by Vo Trong Nghia. International Bamboo Building Design Competition. Low-cost bamboo housing in vietnam by H&P architects. Apr 08, 2013 low cost bamboo housing in vietnam by H&P architects vietnamese low cost housing by H&P architectssix member family developed by vietnamese H&P architects, the low-cost housing project is situated in a flood-stricken region that receives extreme temperatures year-round. meeting the basic residential needs of a residential dwelling, the building will be assembled using minimal components and bamboo module units. secured using anchors, ties and solid connections, the structure will be strong enough to float in floods. built with local materials such as bamboo, leaves and recycled oil containers, the concept combines traditional architectural characteristics to distinguish the exterior fabric. costing just under 2000USD per unit, the plan allows for mass-production, and the ability for villagers to build themselves. 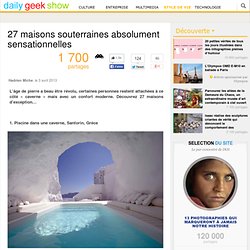 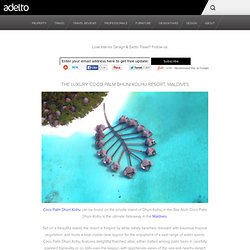 Coco Palm Dhuni Kolhu is the ultimate hideaway in the Maldives. Set on a beautiful island, the resort is fringed by white sandy beaches, dressed with luxurious tropical vegetation, and hosts a blue crystal clear lagoon for the enjoyment of a vast range of water sports. Coco Palm Dhuni Kolhu features delightful thatched villas, either dotted among palm trees in carefully planned tranquility or on stilts over the lagoon, with spectacular views of the sea and nearby desert islands. Beach villas and deluxe villas have open air garden bathrooms, for showers at sunrise or at night under the stars. The all wood water villas offer extreme indulgence for those who are looking for exclusivity and seclusion. Images courtesy of Coco Palm Resorts. Architectural Styles in 20th Century. DECONSTRUCTIVISM: It is the development of post modern from the 1980′s. 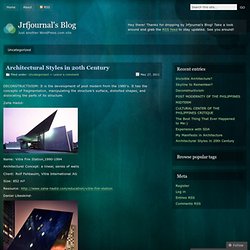 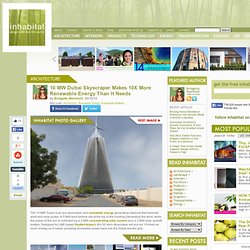 A 5 MW wind turbine sits at the top of the building harnessing the wind, while the power of the sun is collected via a 3 MW concentrating solar system plus a 2 MW solar updraft system. Designed by UAE-based Studied Impact, this 50 story skyscraper will put out 10 times as much energy as it needs, pumping renewable power back into the Dubai electric grid. Studied Impact, headed by architect Robert Ferry, is also responsible for designing the Almesien Tower, another solar concentrating skyscraper.

Ferry’s newest design is planned for the Al Quoz neighborhood in Dubai, and would be located on an empty lot with clear access to sunlight on all sides. Renewable energy systems have certainly been incorporated into buildings before, but never on such a grand scale. Dubai building with wind turbines. Dubai-rotating-building-collage. Da-vinci-tower-plan3. Da-vinci-tower-plan. Da-vinci-tower-plan4. Rotating-Tower-Dubai-UAE-Dr-David-Fisher. Natural Spaces Domes. 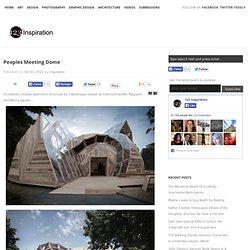 Architecture and water. Combine concrete structure with water are one of favorite tricks of many architects. Water Gardens and Fort Worth, United States Spillway of the reservoir in Armenia Aquarium in Berlin. Natural Pools or Swimming Ponds. Natural Pools or Natural Swimming Ponds (NSPs) Let nature clean the water... Chemical-free water garden and swimming pool. The plant portion, or regeneration zone, is separated from the swimming area by the wall seen a few inches below the water’s surface. www.naturalswimmingpools.com The pools have skimmers and pumps that circulate the water through the regeneration zone and back into the swimming area. Gorgeous Floating Buildings Around the World. Floating City - The Seasteading Institute. Floating Resort on Artificial Island Represents Best and Worst in Sustainable Development.

This water resort proposed for Qatar is a unique mix of floating homes and artificial islands, and is a project that exemplifies both the best and worst in 21st century development. Designed by the Giancarlo Zema Design Group, this new design anchors itself with a series of hotels set on artificial islands. However, after the hapless sinking of Dubai's artificial archipelago, The World, it’s hard to imagine projects like this passing the grade on sustainable development -- if they are possible at all. The project is anchored by an artificial oval island, where sculpted resort towers connect to an underwater hall that provides fascinating views of the sea world. Jetties feed 80 floating houses called “Jelly-fish”, which feature an underwater viewing room in the belly. Guests move about in electric vehicles or on the water in yachts that burn clean hydrogen, and a series of underwater halls give visitors an intimate experience of the sea from below.

Glass Steel and Stone. He early part of the 21st century quickly became known as The Age of Dubai. Many of the world's most spectacular, breathtaking, and startling architectural projects were erected in a city that was little more than a desert outpost a decade earlier. Its leaders had the foresight to know that that its primary natural resource, oil, was in limited supply and chose to embark on a program to rapidly transform the emirate into a world capital in order to continue its prosperity beyond the time when the world relies on fossil fuels. Project-utopia-bmt-yacht-island-design-1. Project-utopia-bmt-yacht-island-design-2.

The top ten floors — which, here, would be the "bottom" ten — is a museum and cultural center dedicated to the Aztecs. Below that you've got retail space, then apartments and finally, deep underground, businesses. Because, you know, that's where business do their best work. Our favorite detail: the interior of the structure is actually hollowed out, and there are bridges that extend out into the center of it so you can look down. Eco-city Inside a One Kilometer Crater in Siberia.

Eco-city 2020 is a proposal for the rehabilitation of the Mirniy industrial zone in Eastern Siberia, Russia designed by the innovative architectural studio AB Elis Ltd. Modern Underground. Modern Underground. The Zero-carbon Underground Eco Home. Sustainable Green Buildings - Earthship Biotecture. Earth Sheltered Homes. “Another type of building is emerging: one that actually heals the scars of its own construction. It conserves rainwater and fuel and it provides a habitat for creatures other than the human one. EarthShips.

Imagine living in a house built out of tin cans, tires and other various recycled materials. $300 Geopolymer Earthbag Dome / 'The $300 House' Challenge for $300 House. Other researchers at the Geopolymer Institute. Ive been investigating the potential of using geopolymer cast stone as a low cost, durable fill material in earthbag houses and reporting my findings on our Earthbag Building Blog. Eco*Dome « Alter*Native ~ Holistic*Être. Earth house. Small, affordable, sustainable earthbag house plans.

Family of Four Grows Their Food in a Swimming Pool. Growing Power Urban Farm on Architizer. What building inspires you? / 'shan-shui city' (the city of mountains and water) is one of MAD's latest projects which will be build in guiyang. it came from a concept which dates back to ancient times of the mountain-water worship, followed by wu zixu’s. 15 (More) Future Wonders of Green Technology: From Spinning Towers to Seawater Greenhouses. Hempcrete Could Change The Way We Build Everything. 7 Modern Wonders of Green Technology: Conceptual and Actual Ecological Designs of the Future. Skyscrapers Good Enough To Eat: Vertical Farm Concepts From Around The World.