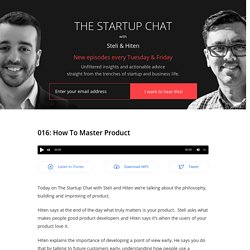 Hiten says at the end of the day what truly matters is your product. Steli asks what makes people good product developers and Hiten says it’s when the users of your product love it. Hiten explains the importance of developing a point of view early. He says you do that by talking to future customers early, understanding how people use a particular product and getting as much information as possible in the early stages. We talk about why the theory of the development of a great product occurs when you solve your own problem may not always be the best approach, but either way talking to customers is necessary. Today’s Tips: Steli: If you have a product roadmap, how about have an anti-roadmap.

What Startups Can Learn from Watsi’s Wildly Successful Email Campaign - First Round Review. In the winter of 2013, something unusual happened. 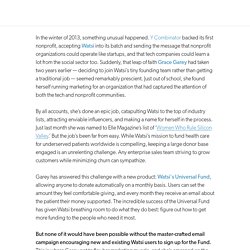 Y Combinator backed its first nonprofit, accepting Watsi into its batch and sending the message that nonprofit organizations could operate like startups, and that tech companies could learn a lot from the social sector too. Suddenly, that leap of faith Grace Garey had taken two years earlier — deciding to join Watsi’s tiny founding team rather than getting a traditional job — seemed remarkably prescient. Just out of school, she found herself running marketing for an organization that had captured the attention of both the tech and nonprofit communities. By all accounts, she’s done an epic job, catapulting Watsi to the top of industry lists, attracting enviable influencers, and making a name for herself in the process. Just last month she was named to Elle Magazine’s list of ‘Women Who Rule Silicon Valley.’ Brand It to Make It Memorable Being able to tell a fuller story was also critical to the fund’s launch. Watsi doesn’t stop there. Présentation de Trusteer Rapport.

Slack’s $2.8 Billion Dollar Secret Sauce. In July 2013, I got an email from Stewart Butterfield. 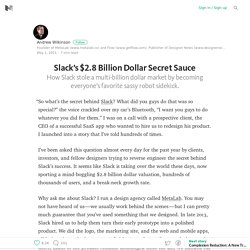 I recognized his name immediately. I was a big fan of Flickr, which he co-founded and sold to Yahoo, and we were both based in the Pacific Northwest. He had big news: he was shutting down Glitch, the game he’d started in 2009, and was working on something new. He wanted us to design his new team chat app. I groaned to myself. When he pulled back the curtain and shared their early prototype on day one, it looked like a hacked together version of IRC in the browser. Figuring out why something is successful in retrospect is like trying to describe the taste of water.

Airbnb: The Growth Story You Didn't Know. Search Results Real-time search powered by There was a design conference coming to town and hotel space was limited, so they set up a simple website with pictures of their their loft-turned-lodging space—complete with three air mattresses on the floor and the promise of a home-cooked breakfast in the morning. 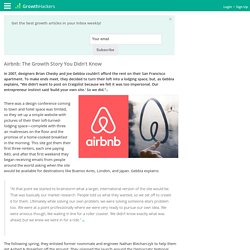 This site got them their first three renters, each one paying $80, and after that first weekend they began receiving emails from people around the world asking when the site would be available for destinations like Buenos Aires, London, and Japan. Gebbia explains: “At that point we started to brainstorm what a larger, international version of the site would be. 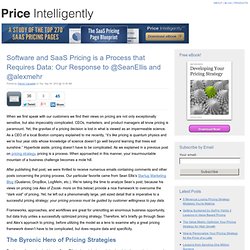 CEOs, marketers, and product managers all know pricing is paramount. Yet, the gravitas of a pricing decision is lost in what is viewed as an impermeable science. As a CEO of a local Boston company explained to me recently, “it’s like pricing is quantum physics and we’re four year olds whose knowledge of science doesn’t go well beyond learning that trees eat sunshine.”

Hyperbole aside, pricing doesn’t have to be complicated. After publishing that post, we were thrilled to receive numerous emails containing comments and other posts concerning the pricing process. Frameworks, approaches, and workflows are great for unknotting an enormous business opportunity, but data truly unties a successfully optimized pricing strategy. Content Management System & eCommerce Software. Le bien-être au bureau.