How To Tell If Someone Is Watching You Through A Two-Way Mirror In 30 Seconds. Many of you might be surprised to find out that there are only 13 states in the USA that legally do NOT allow cameras, or two war mirrors in private places such as dressing rooms, hotel rooms, and even bathrooms. 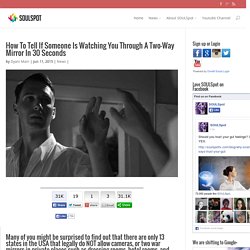 Is your state on the list? South Dakota, New Hampshire, Michigan, Maine, Minnesota, Utah, Kansas, Delaware, Hawaii, Georgia, California, Arkansas and Alabama. (Source) Unfortunately there have been documented cases all over the world of as bars, hotels, restaurants, department stores, and other establishments using two way-mirrors and/or hidden cameras to keep surveillance in private areas. (Scroll down for a CNN news video about a bar in Chicago that had a two-way mirror inside one of the women’s room stalls) There are a few simple tests that can be done to check for two-way mirrors in any establishment. 10 Ways To Tell If Someone Is Lying. By Rinkesh Kukreja of LifeHack| Telling lies is a very bad habit that many people have fallen prey to. 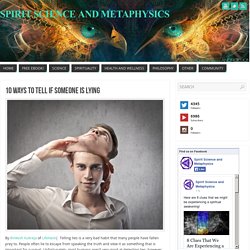 People often lie to escape from speaking the truth and view it as something that is important for survival. Unfortunately, most humans aren’t very good at detecting lies; however, there are a few simple things you can do to determine whether or not a person is lying. Just asking the right questions and observing a person’s body movements can reveal the truth. Palm Reading Chart. Did You Know? 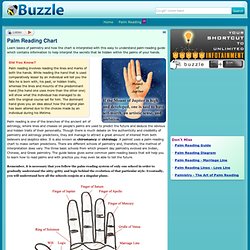 Palm reading involves reading the lines and marks of both the hands. While reading the hand that is used comparatively lesser by an individual will tell you the fate he is born with, his past, or hidden traits, whereas the lines and mounts of the predominant hand (the hand one uses more than the other one) will show what the individual has managed to do with the original course set for him. The dominant hand gives you an idea about how the original plan has been altered due to the choices made by an individual during his lifetime.Palm reading is one of the branches of the ancient art of astrology, where lines and creases on people's palms are used to predict the future and deduce the obvious and hidden traits of their personality. Though there is much debate on the authenticity and credibility of palmistry and astrology predictions, they still manage to attract a great amount of interest from both believers and skeptics alike.

How to Find out Anything from Anyone. How to Survive a Plane Crash: 10 Tips That Could Save Your Life. We often think that plane crashes are catastrophic and unsurvivable events. 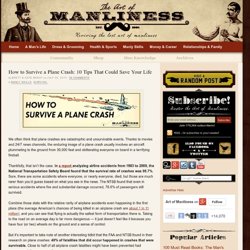 Thanks to movies and 24/7 news channels, the enduring image of a plane crash usually involves an aircraft plummeting to the ground from 30,000 feet and obliterating everyone on board in a terrifying fireball. Thankfully, that isn’t the case. In a report analyzing airline accidents from 1983 to 2000, the National Transportation Safety Board found that the survival rate of crashes was 95.7%. Sure, there are some accidents where everyone, or nearly everyone, died, but those are much rarer than you’d guess based on what you see in the news. How To Hot Wire A Car When The SHTF. Today we’re going to learn an always fun skill that will land you in jail if used improperly. 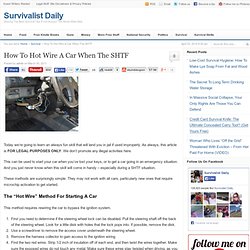 As always, this article is FOR LEGAL PURPOSES ONLY. We don’t promote any illegal activities here. This can be used to start your car when you’ve lost your keys, or to get a car going in an emergency situation. And you just never know when this skill will come in handy – especially during a SHTF situation. These methods are surprisingly simple. The “Hot Wire” Method For Starting A Car This method requires rewiring the car to bypass the ignition system. First you need to determine if the steering wheel lock can be disabled. The Screwdriver Method For Starting A Car This method uses a drill to disable the lock pins, and will destroy the key switch. Mcamposfinal.png (PNG Image, 1872 × 1224 pixels) - Scaled (53%) 9 Sneaky Ways to Cut Your Home Heating Bills. How to Track Down Anyone Online. End Your Kids' Nagging and Negotiating with Three Simple Words.

How to Win Friends and Influence People. Six Ways To Make People Like You Become genuinely interested in other people.Smile. 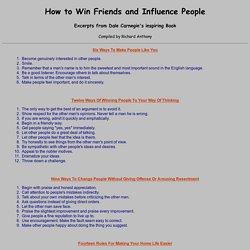 Remember that a man's name is to him the sweetest and most important sound in the English language. Be a good listener. Encourage others to talk about themselves. Talk in terms of the other man's interest. Twelve Ways Of Winning People To Your Way Of Thinking The only way to get the best of an argument is to avoid it. Nine Ways To Change People Without Giving Offense Or Arousing Resentment Begin with praise and honest appreciation. Fourteen Rules For Making Your Home Life Easier Don't nag. Notes Criticism is futile because it puts a man on the defensive, and usually makes him strive to justify himself. When dealing with people, let us remember we are not dealing with creatures of logic. How to disappear on the internet (Infographic)